Courtesy of the Baseball Hall of Fame’s Modern Era Committee, Jack Morris and Alan Trammell will be inducted this July in Cooperstown, NY. Unwittingly, their selection could open the door for players like Andy Pettitte and others who were significant components of baseball’s greatest teams.

If Jack Morris had to wait for Homer Simpson’s induction to the Baseball Hall of Fame (HOF), so be it. And if players like Andy Pettitte, David Cone, and Dwight Gooden had to wait for Morris to be inducted…no, wait a minute here. Pettitte, Cone, and Gooden alongside Bob Gibson, Sandy Koufax, and Whitey Ford? It’s not so much of a stretch, though, when you consider what Morris’ election, in a very compelling way, represents.

Pat Caputo, writing for the Oakland Press in 2013, reminded us that history hasn’t been kind to the 1984 Detroit Tigers, and it’s difficult to understand why. Motor City’s team began the year by zooming to a 35-5 (yes, you read that right) start, and never looked back as the team led wire to wire before going 7-1 in the postseason, defeating the San Diego Padres to capture a World Series title.

Writing for Michigan Live in 2012, Gillian Van Stratt attempted to drive the shunning home when she pointed out “the fact remains the 1984 Tigers and the 1981 Los Angeles Dodgers are the only two World Series championship teams pre-1995 not to have a player in the Hall of Fame.”

With the election of Morris and Alan Trammell, the issue has finally disappeared. But as happens so often, when one door closes another one opens.

But before we go there, it might do well to remember Ernie Banks never had a postseason at-bat and Ted Williams hit .200 in his only World Series appearance, a losing effort to the St. Louis Cardinals in 1946.

Which leads us to the 1998 New York Yankees, who won a mind-boggling 114 games. As late as Sept. 27, the team led their nearest rival by 22 games, their most extended losing streak was four games, their run differential was plus-300, and they finished the season a full 66 games over .500. There’s no argument that makes the ’98 team one of the five best all-time MLB teams, right?

Of the players on that Yankees team, Mariano Rivera and Derek Jeter will be first ballot hall of fame inductees. Others like Tino Martinez, Scott Brosius, and Paul O’Neill all had career years, but that alone would not offset what I’ll call tier three career qualifications for Cooperstown.

It’s in the second tier, though, where we find the Jack Morris and Alan Trammell-types. It’s where players like Pettitte, Cone, Jorge Posada, and Bernie Williams reside. Cone, Jorge, and Bernie have already fallen off the ballot for a lack of support, while Pettitte is unlikely to garner enough votes to come close to the 75 percent needed for induction.

But as with the 1984 Tigers, the 1998 Yankees were something extraordinary in the annals of baseball history and the team would not have gone as far as they did without Pettitte winning 16 of his 256 career wins that season, or Cone going 20-7 en route to finishing his career with a 194-126 record.

Or, how about Bernie hitting .339 and winning the AL Batting Title that season as part of a career in which he came just shy of a .300 career batting average, finishing with a mark of .297.

It’s not quite the same as the ’84 Tigers who had zero representation in the hall until a few weeks ago. I get that. And the ’98 team of the Yankees will be, as we’ve said, represented by Rivera and Jeter.

But the fact remains each of the four mentioned above is deserving. Like Morris and Trammell, their numbers are not overwhelming, and Pettitte will always need to battle through the steroids thing, and without Gooden, ’86 would never have happened for the New York Mets.

Gooden also had his off the field issues, but no one can argue the fact he exerted sheer dominance over every opponent during a Sandy Koufax-like run in the mid-80s.

At the same time, the Core Five was core to the Yankees success in the late 1990’s. And each of these players was an integral part of that success. As far as I know, there is no place in Cooperstown that honors the feats of teams.

But maybe, just maybe, there is now a door open to follow suit with players who are on the cusp and controversial, but who also played and contributed to teams that achieved heights previously unattained. And therefore, that team element could be just the spark which pushes them over the top to a residence in Cooperstown, albeit via the Modern Era Committee.

It’s just a thought and like you perhaps, I find it an intriguing one which still needs even more thought. All I can say, though, and I’m cherry-picking here among those mentioned, is that when it comes to a guy like Pettitte, no pitcher in the modern-day era was tested more in pressure situations than he was. And few, if any, save for Morris, delivered more consistently.

Baseball, after all, is a team game. And while the Hall of Fame has come to be an assembly of those who managed to compile individual numbers over their careers, there should also be a place in the Hall for those who compiled some pretty good numbers and World Series titles.

NEXT: The only hope for the New York Mets is Major League Baseball 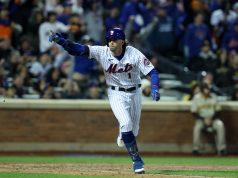