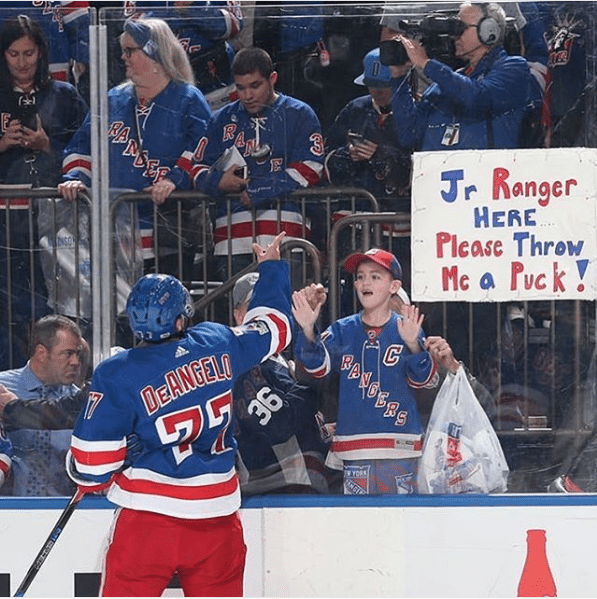 For the kids… lol

This is an odd one, as there are two ways you can read into Tony DeAngelo’s Instagram post. In the photo, you see DeAngelo tossing a puck over the glass to an eagerly waiting young fan, who has a sign asking for one. He tags the picture “For the kids…lol.”

One one hand, things haven’t been going the way DeAngelo envisioned after since coming over to the Rangers in a trade this past summer. He’s been a healthy scratch twice in the team’s first nine games and got just 5:20 of ice time Saturday against Nashville.

Only 21 years old and most definitely one of the “kids” on the Rangers, this could be him venting some of his frustration.

But then there’s head coach Alain Vigneault, who you can see in the lower left-hand corner, just over DeAngelo’s left shoulder.

He looks…unhappy, to say the least. In fact, he looks like he’s ready to tear someone’s head off—and his focus seems to be on that young fan on the glass.

So is DeAngelo remarking on his frustration with his head coach, who clearly doesn’t trust him? Or is he pointing out how Vigneault looks like he won’t be playing the part of Santa Claus this holiday season?

Either way, it will be interesting to see if DeAngelo is a healthy scratch on Monday when the Rangers take on the San Jose Sharks at Madison Square Garden.