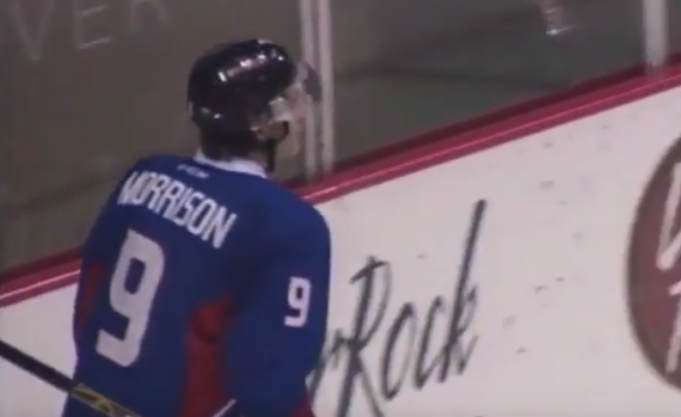 Revisiting the prospect series, get to know New York Rangers center and prospect, Brad Morrison, out of the WHL.

In the 2015 NHL Entry Draft, the New York Rangers, blessed without a First Round pick for the third consecutive year, dug deep and made some great picks in the later rounds. One of those picks was center Brad Morrison who was playing and is still currently playing with the Prince George Cougars of the Western Hockey League.

In his draft year, Morrison posted a line of 23 goals, 27 assists for 50 points in 67 games. Morrison went on to post seven points in five playoff games that season, eventually losing in the first round.

Morrison followed up his impressive draft season with an even more impressive season logging 28 goals and 34 assists for 62 points. Morrison stands a generous 6-foot tall and weighs 170-pounds.

When scouting Morrison, one can’t help but be impressed with his tantalizing skill set offensively. He has a wonderful set of hands, great vision, and is crafty around the net. But just because of this skill set, Morrison is so much more than a perimeter offensive guy. He gets his nose dirty and goes hard in the corners. Because of his stature, he often times loses those battles, however, the fact that the determination and grit are there is a good sign.

Many times, some of these middle skill guys never make it anywhere because they lack an element aside from offense. So when games get more physical and time and space become more limited, they cannot make the same offensive plays, and then on top of that don’t add any grit. But, Morrison can play both types of games, the skill game and a gritty game.

When you watch Morrison on film, the term explosive comes to mind. The kid can fly, and his skill set allows him to make plays at top speed. His lack of production is somewhat alarming, however, the Cougars haven’t been a terribly strong team, and they aren’t loaded with first round draft picks. To me, he reminds me of a Tyler Johnson type player. I would say his ceiling isn’t as high as Johnson’s, however, he definitely has a future as an offensive second or third line center.

At this point, Morrison has yet to sign his entry level contract, the Rangers most likely concerned with his lack of production, as he gets older. Whatever the case may be, Morrison is likely more than a few years away from making the show, and will probably have to develop and get stronger on the farm.

NEXT: Rangers Fans Finish 1st in the Pom-Pom Rankings