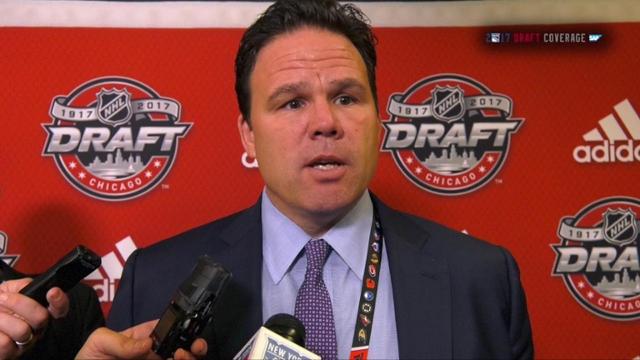 General manager Jeff Gorton has been a busy man since the New York Rangers were eliminated from the playoffs.

After beating the Montreal Canadiens in six games to advance to the second round of the NHL Playoffs, most thought that the Rangers would have little trouble getting past the Ottawa Senators.

But a blown three-goal lead in Game 5 allowed Ottawa to tie the series, and with momentum on their side, the Senators finished off the Rangers in Game 6 at Madison Square Garden.

The offense had underachieved. Gaping holes on the defense had been exposed. There was no denying that changes needed to be made. The changes wouldn’t lead to an offseason of rebuilding,  but one that would be considered a restructuring.

Jeff Gorton, who took over as general manager for NHL legend Glen Sather two years ago, would be the man tasked with breaking the team down and starting the restructuring process.

The task at hand would be a difficult one. Not only did he have to deal with the strict contracts that some players had but the way fans would react if moves involving the team’s “core players” were made.

Thanks to Gorton’s background, he was up for the task.

The 2017-18 season will be Jeff Gordon’s second as GM and his 10th in the Rangers organization.

He had served four years as assistant GM under Sather and, before that, three seasons as assistant director of player personnel. He first joined the club as a professional scout.

But his career began in Boston, where held a number of roles over 15 years, including seven as assistant GM. He even spent a short time as the team’s interim GM.

He also played a role in acquiring Ryan Mcdonagh and Rick Nash in trades as well as the signing of free agents Kevin Hayes and Mats Zuccarello.

That experience makes it safe to say that Gorton is fully prepared for to mold the Rangers into a championship-caliber team.

He has seen a lot of players come and go over the last 25 years and knows how to put a strong hockey team together. When he took over as GM of the Rangers, he had the title but it was still Glen Sather’s team.

Now, thanks to some gutsy moves, Gorton has begun to make the Rangers his own.

Buying out longtime defenseman Dan Girardi was a difficult, but necessary move. Trading Derek Stepan and Anti Raanta to Arizona, as well as leaving Oscar Lindberg unprotected in the expansion draft were risks Gorton had to take.

He added some high-upside players to the organization in the draft, selecting Lias Andersson and Filip Chytil. But his biggest move was signing free-agent defenseman Kevin Shattenkirk – and convincing him to take less money than other teams offered.

He signed center David Deharnais and restricted free agent Jesper Fast, but the team could still use some more depth up front.

Gorton needs to figure out how to sign Mika Zibanejad without having much salary cap room left.

With the way he’s worked his magic so far this summer, there’s little reason to think he can’t pull it off.