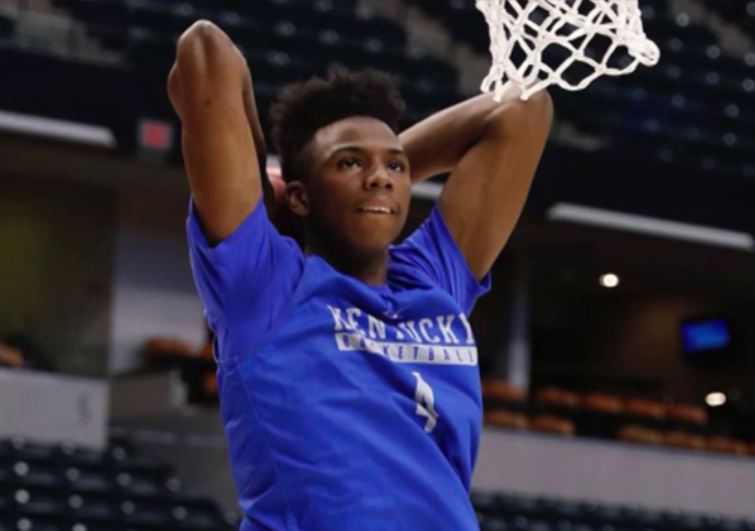 The Brooklyn Nets have multiple late first-round picks this draft, and they could be using one on an unknown backcourt player.

Hamidou Diallo is someone that the Nets could be taking in the late 20s, and he did a great job of finding a loophole in the one-and-done rule. To be eligible for selection in the NBA Draft, prospects must be one year removed from high school upon entering. How they spend that year is up to them. The majority goes to college to maximize their potential and some, like Thon Maker, essentially take a year off. Diallo is (kind of) the latter.

The 6-5 Queens, New York native enrolled at Kentucky this past January after graduating from Putnam Academy in Connecticut last spring. Additionally, he turns 19 this year. By rule, he’s eligible. Diallo is an elite talent who spent the last couple of months practicing with the Wildcats without ever suiting up for a game. Since he declared, a couple of teams, including the Nets, have been in contact with his AAU coaches, according to Adam Zagoria.

The Mavs, Pacers and @BrooklynNets have recently checked in with AAU coaches of UK G @Diallo1Hamidou. Nets have multiple picks.

Regardless of how little we’ve seen of him, Diallo is an intriguing prospect. At the Elite 24 event last year, a 6-10 wingspan was recorded, and Ballislife declared him one of the best athletes they’ve ever covered. That is Diallo’s most endearing quality. He’s an incredibly explosive player. With athleticism and length, he has the tools to at least excel on the defensive end of the floor, and this is something I say about a lot of prospects because it’s true.

Outside of that, we don’t know much about him. DraftExpress has him going 36th overall, and such a late projection is attributed to not having seen him play against premier talent. The numbers listed on his page, though, are eye-catching. In 18 games played in 2016, Diallo averaged 18.1 points on 49.6 percent shooting, 5.5 rebounds and 2.0 assists. It’s likely that these are from his time with the NY Rens on the AAU circuit, but they’re still impressive and give the inclination that he’s a true slasher with a scoring instinct. If a team is in the market for a two-guard, that’s what they’re looking for.

I don’t believe the Nets need another guard, and, typically, even talking about this would make me apprehensive. Diallo is different. He isn’t a lottery pick. Since he’s expected to slide to the end of the first round, the expectations are lowered, and the internet wouldn’t have a meltdown if Brooklyn grabbed him and sent him down to the D-League. His foundation is solid, but there aren’t many skills that he’s shown us. Also, Diallo’s skipping the 5-on-5 portion of the combine which would’ve been a scout’s dream.

Diallo impressively navigated the NCAA’s rulebook and, although he hasn’t helped his stock, he hasn’t hurt it, either. If the Nets were to take a shot on him, it could work out. He’s a project. Luckily, the organization has the time to allocate to him. Moreover, they can use their other pick on a more polished player.