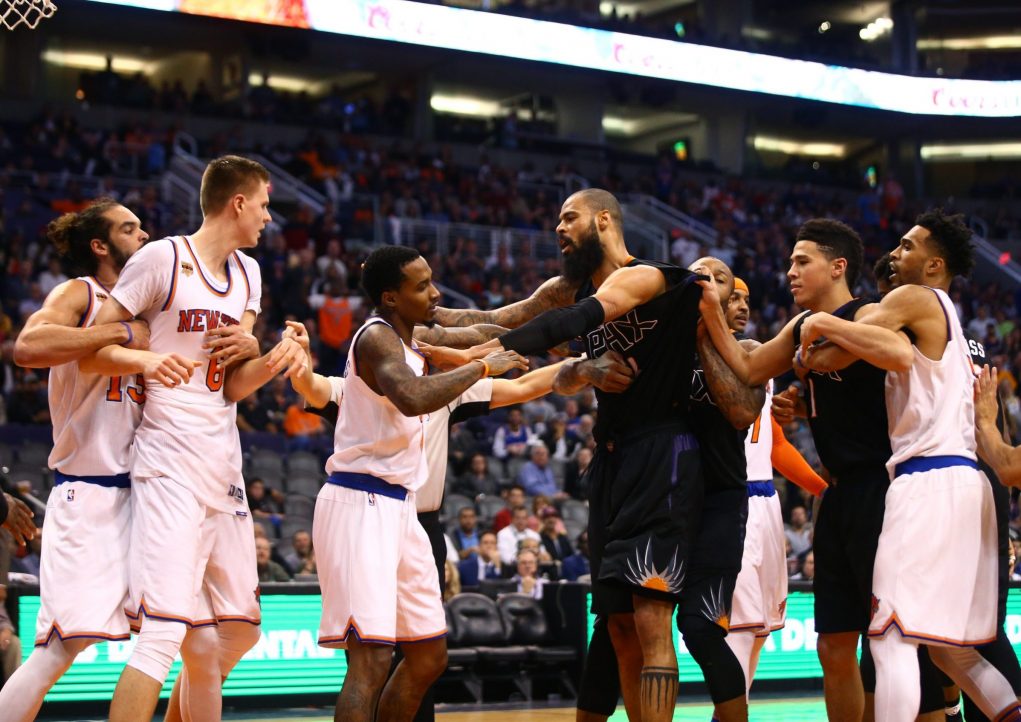 The New York Knicks weren’t able to escape with a win in their third straight close game on the West Coast. They lost in OT, 113-111.

It’s hard to remember when the New York Knicks weren’t playing a close game down the stretch. They won the first two games of their Western Conference road trip against the Los Angeles Lakers and Sacramento Kings by a combined nine points. They played with fire but came out on top due to inferior competition.

They weren’t so lucky on Tuesday night in Phoenix. Despite 34 points from Kristaps Porzingis, who got into a memorable scuffle with the Suns’ Marquese Chriss, the Knicks fell short 113-111.

Whoa, KP in a foul mood. Love it. (Still, if this were the 90s, it'd be considered tea at your grandma's.) #Knickshttps://t.co/ZYn2Ui2VVE

An incredible 19-4 fourth quarter run led by Porzingis and a motley crew lineup of Kyle O’Quinn, Justin Holiday, Ron Baker, and Lance Thomas was ruined with the loss. O’Quinn was huge for the Knicks again with 22 points and a team-high 14 rebounds. Five were offensive.

When Porzingis fouled out with 1:34 left in OT the Knicks were deflated. KP was on fire and carrying the team on an off night from Carmelo Anthony.

Melo was 3-15 and missed the go-ahead jumper with six seconds remaining in overtime. It wasn’t his night.

It wasn’t Jeff Hornacek’s night either in his return to Phoenix just one season after an unceremonious dismissal as head coach.

But the biggest news of the night was Derrick Rose having to leave after just 10 minutes of first quarter action. Rose’s back acted up again and he went to the locker room and didn’t return. Not a good sign for Thursday’s game against the Golden State Warriors.

Former Knick Tyson Chandler took out his frustrations on his old team tonight with 13 points and 23 rebounds.

Suns point guard Eric Bledsoe led the team in scoring (31) and assists (8) and was a perfect 12-12 from the free-throw line.

The #Knicks fall in Phoenix tonight, 113-111 in OT. #NYKvsPHX pic.twitter.com/YyZiE5X0SQ

.@brandonjennings starting the second half. Rose dealing with back spasms. #Knicks #NYKvsPHX

Moments before tipoff, here’s your preview as the #Knicks seek their 3rd straight W! #NYKvsPHX

NEXT: Jay-Z’s ‘roast’ of Phil Jackson during LeBron James presentation was average at best (Video)

The Knicks paid RJ Barrett. Is a breakout season coming?