If there’s been one nagging issue on the radar revolving the New York Knicks, it’s been this whole Derrick Rose rape case.

It’s a distraction. There’s no doubt about it. Although, for some reason, it feels like it’s flying a bit under the radar.

Derrick Rose to Rape Accuser — You're No Prude, You Hooked Up With Nick Young https://t.co/DiFMrnyUt2

According to the report, D-Rose refutes the idea that his Jane Doe accuser is a prude. In fact, he claims she isn’t due to the idea she hooked up with Young.

According to docs obtained by TMZ Sports, the text was sent from Jane Doe to her roommate in November 2014. It says, “since u goin to nicks can u please tell him to give u my bra lol.”

While the entire basketball living world is now informed, reaction is flying in from every angle. One such perspective is coming from D-Rose’s teammate, Brandon Jennings: 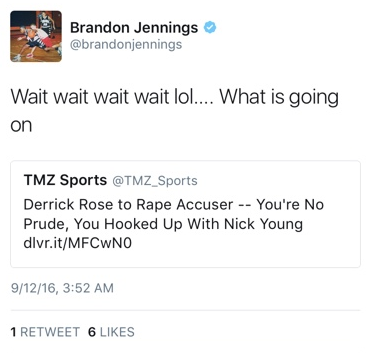 The tweet has since been deleted, but listen B-Jenn, don’t worry. You’re not the only one with this reaction. This thing keeps getting wilder by the minute.

NEXT: Thanks To Jerry Reinsdorf Not Seeing A Future With Joakim Noah, Phil Jackson Pounced