We’re almost there. As we sit here on Tuesday, January 24th, we’re just 22 days away from Mets pitchers and catchers officially reporting to Port St. Lucie. After a whirlwind of an offseason that included tons of money getting spent, there’s not much left for New York to do.

General manager Billy Eppler is still hunting for roster upgrades, but the heavy lifting is complete. Instead of continuing to dissect everything we see on social media, let’s pick apart New York’s player projections for 2023, shall we? It’ll feel a little more productive, at least.

After the Mets’ 101-win campaign in 2022, New York has now had 13 teams finish with a winning record since 1997. After checking out the individual fWAR projections for each pitcher expected to be in manager Buck Showalter’s rotation, I’ll look to past seasons and tally up the number of 2.0-plus fWAR and 3.0-plus fWAR hurlers to see if there are any trends.

The Mets are heading into this upcoming season with what appears to be enviable depth in the starting rotation. If New York decides to keep Carlos Carrasco, the Amazins will have David Peterson and Tylor Megill as their sixth and seventh starters. Assuming everyone remains healthy throughout Spring Training, of course.

Many teams have to use seven, eight, nine, or even more starting pitchers throughout a season. So, while it seems like Peterson and Megill may not get a chance in the rotation, they’ll probably rack up more starts than many are currently expecting.

Regarding the current rotation mix, here’s what each hurler is projected for this season in terms of fWAR and innings pitched, according to FanGraphs’ Steamer Projections:

Just for the record, Megill is projected for 1.1 fWAR in 78 innings pitched. Meanwhile, Peterson is tabbed for 0.9 fWAR in 64 frames.

For the top five, the only real unknown is Senga. He’ll be pitching in the big leagues for the first time after spending his entire career in Japan. When it comes to the co-aces in Verlander and Scherzer, though, those numbers are attainable based on previous production and assuming general health.

Comparing this to past winning seasons

Going back through the individual starting-pitcher production for each of these squads, I tallied up the hurlers with 80-plus innings pitched who accumulated at least 2.0 fWAR that year. Then, I wanted to see how many of those performances resulted in 3.0-plus fWAR. Here are those findings. 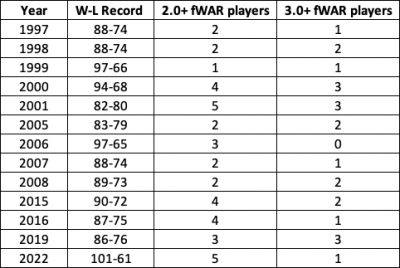 The only year the Mets didn’t have multiple 2.0-plus fWAR pitchers in their rotation was 1999. Outside of that and 2022, New York’s 2006 squad was the other top regular-season performer. While they had three pitchers accumulate 2.0 fWAR, none of them surpassed 3.0.

But of course, we know that team was carried by a top-tier offense and bullpen.

Looking ahead to the Mets’ upcoming year

This data shows the importance of getting a certain level of production from New York’s rotation in a winning season. An elite unit would be terrific, but it doesn’t have to be full of Verlanders and Scherzers (I’d be open to that, though).

As we can see above, the 2022 squad had five hurlers surpass that number. That’s tied for the most in one season within this sample. It’s also the first time they reached that number since 2001.

More things have to go right for the 2023 Mets than just having a productive rotation. However, it clearly appears that a fully functioning unit is important to the organization’s recent success more times than not.