After the Knicks strung together eight straight wins, they’ve now dealt with three consecutive losses. The most recent one was a 119-112 loss to the Philadelphia 76ers on Christmas Day at Madison Square Garden. A former notable Knick was in attendance for the action in Carmelo Anthony, too.

The 19-year veteran suited up for the Los Angeles Lakers last season. He was productive in a bench role, averaging 13.3 points, 4.2 rebounds, and 1.0 assists per night. Even if he catches on elsewhere at some point this year — which Anthony is open to — New York will always have a soft spot in his heart.

After all, Anthony was born in Brooklyn, won a National Championship with the Syracuse Orange, and eventually played in parts of seven seasons for the Knicks. After getting singled out during Sunday’s game, the forward received a great ovation from the MSG crowd. But it also gave us a good view of his hat, and we have some thoughts:

A Twitter user is saying this is allegedly a 2000 World Series hat. If this is true, we need to find all of these hats that have been produced and burn them in a ceremonial bonfire. Upon seeing the logo on the front, I had no idea what exactly it was representing. But then, when I saw the clear Yankee and Met fonts on the side for “New York”, I immediately started to shake my head in disgust.

This is just about as bad as seeing someone at a baseball game wearing a Yankees jersey and a Mets hat. (It sounds a little unbelievable, but I’ve seen stuff like that with my own two eyes, as have many others, I’m sure.)

Then again, this isn’t the first time Anthony has pulled a stunt like this. Check out a different Yankees/Mets combo hat he wore at Citi Field in 2016 (photo via Sports Illustrated): 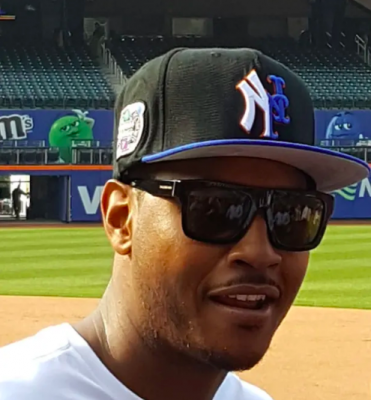 Like, what in the world is going on here??

Back in 2012 when the Yankees and Baltimore Orioles met in the playoffs, Melo actually said he’s never been a fan of the Bombers. He said his allegiance had been with the O’s since he was eight years old. Anthony attended high school in Maryland and Virginia, so this checks out.

Even if he’s just trying to be Switzerland and not choose a side, there has to be a better way for him to get it done, right? Right?! Let’s hope we never see this hat on Melo’s head again, and that it doesn’t lead to another Mets–Yankees mashup that nobody is asking for.