It seems like one of Mets owner Steve Cohen’s biggest hobbies these days is sending mixed signals to people on Twitter.

Cohen was a very active participant on the social media platform when he first took control of the team in November 2020. After learning the burden it can bring, he’s been a lot less active over the past year or so. That doesn’t mean he can’t still find ways to get a rise out of others.

Once Jacob deGrom signed with the Texas Rangers, the Mets went on their second annual spending spree. It included re-signing Brandon Nimmo and coming to terms with Justin Verlander, David Robertson, Jose Quintana, and Kodai Senga. Oh, and trading for southpaw reliever Brooks Raley. All in all, the Mets shelled out a guaranteed sum of more than $360 million to this group in a week’s time. They’re spending at record levels, but it’s not like they’re just spending like drunken sailors, though.

Are they done? No, they’re not. Mike Puma of the New York Post reported the team’s focus is shifting to the bullpen for now. But with a lineup that looks exactly the same as the 2022 version, fans want the Mets to get another bat.

After spending as much as they have, people don’t want one of those under-the-radar signings. They want the Mets to land Carlos Correa. The possibility of this is incredibly small, but who knows? You can’t put anything past Cohen and the Mets these days.

Whether New York even has a true interest in signing Correa or not is undetermined. Cohen’s recent Twitter likes will surely raise an eyebrow or two, though (h/t to Metsmerized): 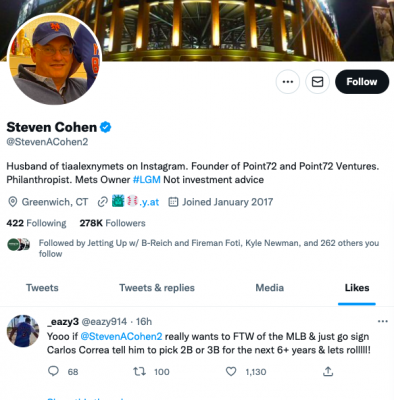 Could this be a mistake? It’s possible, but then again, Cohen hasn’t liked many tweets during his Twitter lifetime. He’s liked 69 tweets overall, with five of them coming since last April. As we can see above, this particular tweet blew up a bit. So if it really was a mistake, you’d have to imagine Cohen would’ve un-liked it when his mentions started going nuts.

Or, maybe he’s just having fun with people since there always seems to be criticism following any Mets moves. We know that if New York really coveted Correa, there would be a good chance Cohen, Billy Eppler, and the front office could make a convincing argument to bring the free agent to Queens.

That all remains to be seen, though. The Mets have mostly dominated headlines with their latest flurry of moves to rebuild the roster. If this Twitter like just throws people into a tizzy, then so be it. Either way, we know New York still isn’t finished adding talent. Correa to the Mets couldn’t be any slimmer of a possibility. However, I’ll believe the shortstop is headed elsewhere when the official news drops because you never know.

What a time to be a Mets fan, right?