While there are still 20-plus games left in the regular season, we’ve already established that the 2022 Mets have performed unlike many teams in franchise history. Thanks to the Braves being one of baseball’s hottest teams over the past three months, what New York has done still may not lead to a National League East title.

The Mets lost their third game in a row Tuesday night, while the Braves won a wild one against the Athletics for their sixth straight victory. That has pulled both squads into a tie atop the divisional standings.

This is the first time since April 11th that manager Buck Showalter’s squad hasn’t been in sole possession of first place. In case you forgot, the Mets had an incredibly comfortable NL East lead earlier in the year. Here’s what it looked like on June 1st. 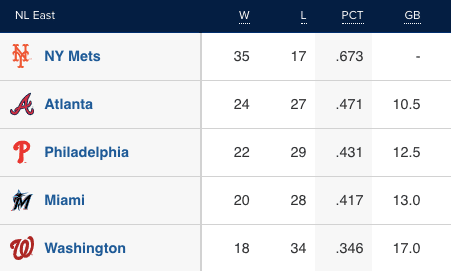 There were some people who thought the NL East was over at this point. While that was nice to think about in theory, Atlanta woke up and has done what many expected them to do. That’s led to New York adding its name to the below list:

According to @EliasSports, here’s the teams since 1969 to have a 10+ game division lead then have a team either tie or overtake them for 1st at some point:

That is 100% not great, Bob. Does this kind of history seem familiar to you? It should, mostly because the Mets did something that sounds similar last year (although it’s very different, and we’ll get into why in a second).

During the 2021 season, the Mets spent more than 100 days in first place and still finished with a losing record. It was the first time that ever happened, because of course it was.

I have seen this statistic in several places today, and there is no better summation of the 2021 Mets:

No team in Major League history has spent as much time (103 days) in first place and finished with a losing record. The Mets are mathematically guaranteed to become the first.

It’s this kind of stuff that’s the exact reason why Mets Twitter is spiraling right now. The fanbase has been burned so many times by past collapses and not living up to certain expectations. So much, in fact, that if you go on ol’ Twitter dot com, you’ll see people talking about how they think the Mets won’t even make the playoffs.

FanGraphs literally has the Mets’ odds of reaching the postseason at 100%, so it doesn’t seem like that kind of collapse is coming. Don’t tell that to Mets Twitter, though.

So what’s the difference between the Mets coughing up a divisional lead last year and what’s currently happening? That’s simple: New York absolutely collapsed after the 2021 All-Star break. This year’s version hasn’t.

After posting a 48-40 record in the first half last season, the club struggled to a 29-45 mark in the second half. The 2022 Mets went into the All-Star break with a 58-35 record, which was good for a .628 winning percentage. So far in the second half — including the past three disappointing games — they’re 27-16, which is good for a .628 winning percentage.

Yes, they’re actually winning slightly more frequently now than they were in the first half. Does this team have some holes and concerns about the roster with October on the horizon? You bet they do. But even with this current three-game skid, they have not choked or coughed up their lead. SNY’s Joe DeMayo gives some more appropriate context, too:

It’s two of the very best teams in MLB, don’t let the last few days which have been obviously bad cloud that

It was always going to be a race down to the wire and Mets need to beat these not good teams https://t.co/8oNKP5apqf

As I sit here and write this on Wednesday morning, there are still 26 regular-season games left to play. New York has three games remaining against Atlanta, and the majority of its September schedule is against losing teams. They haven’t taken advantage of the last few days, but it doesn’t mean they can’t turn things around. It just has to happen in short order.

What many won’t focus on is that the last three times a team has let a double-digit divisional lead evaporate, they’ve all made the playoffs. The 2019 Twins and 2012 Yankees both won their division. And while the 2006 Tigers made the playoffs as a Wild Card, they ended up reaching the World Series.

The narrative you’ll hear out there on the interwebs is the Mets have blown it again. They’ve made unfortunate history for the second year in a row, but this isn’t the end. It’s just the beginning as the regular season winds down and the postseason gets underway.