As we watched the Kansas City Chiefs roll the Pittsburgh Steelers on Sunday evening, it was impossible to avoid the talk about this being the end of Ben Roethlisberger’s remarkable career.

“Big Ben” was never on a Steelers team that finished a season with a losing record. And Pittsburgh getting into the playoffs this year was miraculous.

Looking back, the 2004 NFL Draft gave us some of the true all-time greats.

Larry Fitzgerald, the third overall pick by Arizona, is certainly in the conversation for greatest receiver ever not-named Jerry Rice. And Sean Taylor was selected fifth overall by Washington. We have all wondered what could have been since his tragic death.

But the most of the talk then — and now — centers on the quarterbacks. And boy did the big three in that class live up to the hype.

Of course the biggest draft story in 2004 was the Manning family pulling an Elway, telling the Chargers that Eli wouldn’t play for them. No way, no how.

And then the two teams swapped quarterbacks. They will be tied together forever because of the trade that took place, but Eli’s legacy has two rings that are lacking from Rivers’ really good career in San Diego.

What about Big Ben?

Ben Roethlisberger, an enormous quarterback coming out of a mid-major Miami of Ohio, slid all the way to No. 11, where Pittsburgh called his name.

His body was enormous, his arm was strong and he won games. But there were questions about how dominating in a mid-major conference against “lesser” competition would translate to the NFL.

The Steelers grabbed the kid from Ohio and, thanks to an injury against the Ravens, inserted him into the lineup early in his rookie season.

Roethlisberger, not Manning or Rivers, won the Offensive Rookie of the Year award in 2004. He was 13-0 as a starter his first season in the NFL and appeared destined for greatness.

Rivers had a lovely career in San Diego and Indianapolis. He put up good numbers in the regular season but never got to the top of the mountain. He retired without a championship on his resume.

Manning and Roethlisberger, however, won two each.

As history looks back at the 2004 NFL Draft class, we’ll look more at how Manning compared to Roethlisberger because of their championships than tying Manning to the player he was traded for, Rivers.

So how do the careers of Eli Manning and Ben Roethlisberger compare? Here are their regular season numbers. 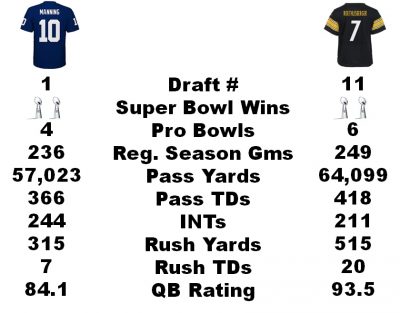