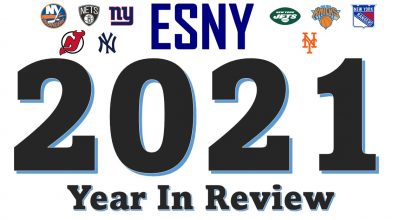 Not many franchises are looking forward to closing the books on the 2021 calendar year as much as the New York Mets.

What started with high hopes in the wake of the huge trade for and subsequent blockbuster signing of Francisco Lindor turned into a debacle. On and off field issues plagued the Mets this year; they — and we — are glad it’s almost over.

But a flourish of free agent signings have given Mets fans high hopes for 2022. And hey! We’ve got a manager! Let’s hope they can right the ship and be in first place when the season ends!

There are two moments that are going to share the best of the calendar year. On the field, Pete Alonso winning the Home Run Derby was fantastic. He played to the crowd and put on a show. Fans loved it – and so did he.

The second moment was the shocking signing of future Hall of Famer Max Scherzer to bolster their rotation. The Mets have had a great offseason thus far, and Scherzer is the headline addition.

Where do we begin? It could be the first GM getting fired for being a sexual predator. Or the second one getting let go after getting a DUI on his way home from a team party at the owner’s house. Or pick any series of tweets from the owner. But we’re going to stick on the field with the thumbs down controversy. Javier Baez took most of the heat for it, but he wasn’t alone.

What became abundantly clear as the final three months of the season played out was that the Mets cannot succeed without Jacob deGrom getting the ball every fifth day. He was off to the best start of his incredible career, but his body failed. The addition of Scherzer will take some pressure off him, but the Mets’ rotation is built to rely on those two heavyweights to win games consistently.

There were high hopes that Dom Smith would compliment Alonso and Francisco Lindor. And, to his credit, he appeared in 145 games and finished fifth on the team with 446 at-bats. But he struggled mightily, slashing .244/.304/.363 with only 11 home runs and 112 strikeouts.

This would have been a hard F if not for the free agent signings after the 2021 season came to a close. Scherzer and the other additions give the appearance that new GM Billy Eppler has a plan — and the money to back it up. We’re still in wait-and-see mode with Buck Showalter as the manager as well.

We’ll have to wait for the 2022 season to see if the money has been well spent.