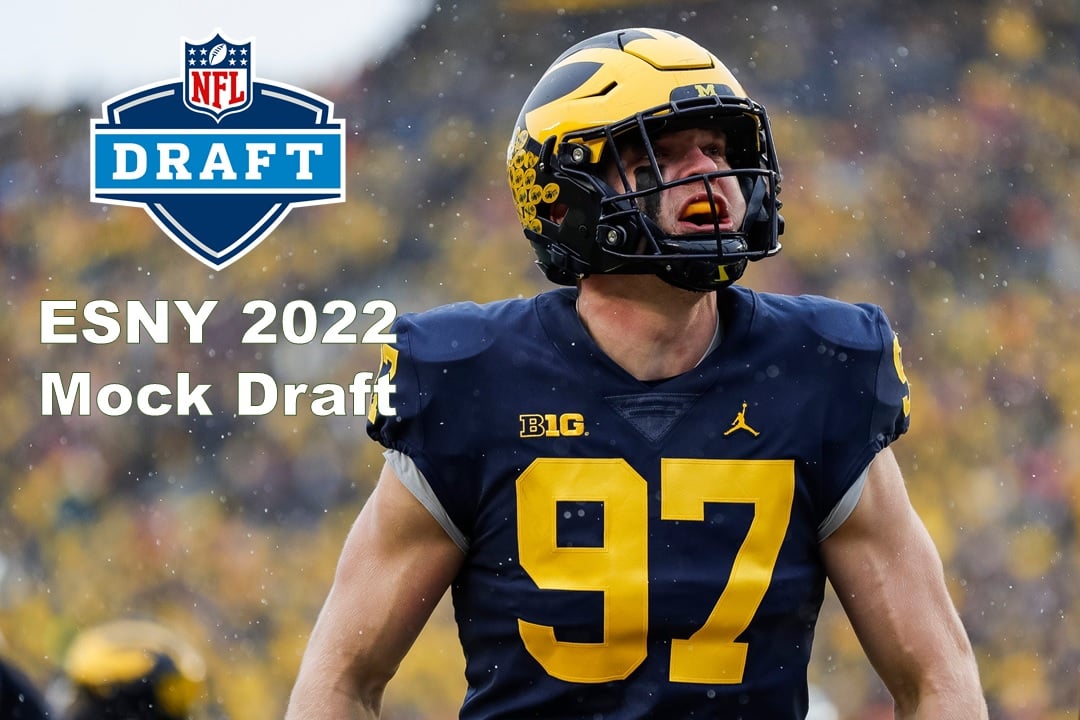 The Detroit Lions are awful and will likely continue to own the No. 1 overall pick.

Amidst all of the head coaching chaos in college football, we’ve now arrived at conference championship weekend for the collegiate ranks. Players are committing to the Senior Bowl and de-committing from their schools of choice. And we’ve seen some great individual performances over the past months.

We also have an NFL that has some clearly established front-runners, some dumpster fires (including both New York teams) and the middle of the pack is a mess. So the draft order continues to change on a weekly basis — except No. 1, where the Lions will own the top spot again it appears.

We have a big change with the top overall pick. The Lions need to take an impact player to be the face of their franchise, but there isn’t a quarterback available who will change their future. We had mocked them an edge rusher previously, and we’re staying there but now taking Hutchinson. He’s a Michigan man who just absolutely dominated Ohio State’s offense. He’s a game-changer and is now our top overall prospect in the coming draft.

Our previous No. 1 pick slides to the Texans at No. 2, where the Texans will hope he can be their future version of JJ Watt. Thibodeaux is a freak athlete who would be an exciting addition to the Texans’ defensive front.

As long as the top offensive tackle is on the board, the Jags should be happy to take someone to protect their young franchise quarterback. They have used recent picks on skill position players on offense but desperately need to protect Trevor Lawrence better/at all. Neal would be a smart, easy pick for Jacksonville.

Hamilton continues to be an ideal pick for the Jets, who will need a safety and Hamilton is one of the best overall defensive players in the coming draft. It’s unfortunate the Jets are picking fourth, but Hamilton (and the next pick) could help change their fortunes into the future.

The last time a center went in the top ten overall picks was Bruce Matthews, who wound up in the Hall of Fame. Does this feel for a reach on an interior offensive lineman at the fifth overall pick? Maybe. But Linderbaum is the best overall offensive lineman in the coming draft class. He fills a need and is a star. This is about value and need over sex appeal; the Jets can do that with their second pick in the top five.

The Giants, like the Jets, have back-to-back picks inside the top ten (thanks, Bears). They need an edge rusher, but there isn’t one we would take here and there will be good value on the edge later as well. They need an improvement in their linebacking corps and Dean is a potential superstar.

The Giants also need to protect whomever is their quarterback next year. They’ll have a few options (assuming Linderbaum is off the board) and might consider Ikem Ekwomu or Kenyon Green here as well, but Cross could be a starting tackle for them for years to come.

Our first quarterback comes off the board at No. 8 and heads to Carolina, where the Cam Newton experiment appears to have run its course in two weeks and the regret for making the Sam Darnold deal will be felt for a couple years. Pickett is a nice player who will improve their offense.

As it stands now, Philly will be the third team with multiple picks in the top ten overall selections. They need to overhaul their defense and fix their offensive line, and will be able to do that with their collection of picks. Here we have them taking a supremely talented corner.

The Eagles’ second pick in a row stays on defense and moves from the back end to the front. Karlaftis is a solid pass rushing edge player who will make an impact immediately. If the Eagles start with these two guys they’re in good shape to start their next draft class.

The Saints have clearly shown that quarterback is a huge need. They’ll also need a receiver to replace Michael Thomas, but they need someone to throw the ball. Corral comes out of a happy-chucking offense at Ole Miss and would be a nice fit in Sean Payton’s scheme.

Minnesota’s two starting corners are on short-term deals and their secondary is a mess including them. So looking at that position early in the draft makes sense, especially if they’re able to pick from most of a decent class at the position.

Atlanta’s defensive front is weak. Well, a lot of their roster needs work. And, at some point, they need to draft Matt Ryan’s replacement. But in a soft quarterback class we’re going with an exceptional defensive lineman who can play inside or outside and make noise in both places.

They’re currently a playoff team, but there are so many variables in play with their best defensive player done for the year we can’t buy them staying there. They need a long-term answer under center and Ridder has shown at Cincinnati that he’s the goods.

The Steelers need a quarterback, but we’re not buying more than three in the coming class being worthy of a top-15 pick. The Steelers probably won’t, either. Ekwomu is a dominant blocker who can play outside or inside and probably slots as a guard in the NFL. Pittsburgh needs to protect whomever is their next quarterback and this is a smart pick.

With OBJ out of town the Browns have a need for a future No. 1 receiver. Olave could be that guy, and in a strong receiver class having him be the first off the board is a bit of a surprise at 16 but here we are. Cleveland will make Buckeyes nation happy here.

The Eagles might think about their offensive line here, but addressing all three levels of their defense with elite talent would be a game-changer in Philly. Lloyd is arguably the top inside linebacker in the class and would give the Eagles three new leaders for the next five years (at least) on defense.

London’s final season at USC ended early because of injury, but his talent is obvious. The Dolphins will likely be in the market for a quarterback (again) and this pick might wind up in Houston if the Deshaun Watson rumors ever turn into reality, but adding another receiver also makes sense.

Who will replace Von Miller? How about the guy who, with Hutchinson, wrecked Ohio State’s playoff dreams? Ojabo’s draft stock is skyrocketing, and rightfully so. He’s been marvelous for Michigan and could be off the board before the 19th pick.

After they lost a young receiver to stupidity, the Raiders would undoubtedly be thrilled to land one of the top outside threats in the draft here. Wilson is in the conversation for the best receiver in the upcoming draft class and would be an immediate impact player for their offense.

The Chargers’ secondary needs improvement. Frankly, their entire defense leaves a lot to be desired. And their offense looks pretty solid for next year assuming everyone stays healthy. So we’ll focus on the back end and take the talented McCreary.

Another corner comes off the board here. We really like Gardner’s size and athleticism and could easily see him off the board earlier than this pick. But having a kid from down the street fall into the Bengals’ lap would be a nice story.

We’ve liked the idea of the Lions thinking quarterback with their second pick in the first round because of the extra year of control, but the Rams continuing to lose pushes this pick up the board. If the Lions can take a top tier receiver here it will help Jared Goff and their future quarterback.

The Cowboys are hard to figure out from one week to the next, but adding a pass rusher to compliment the likely Defensive Rookie of the Year is a strong consideration. Jackson opposite Micah Parsons would make the Cowboys’ pass rush potentially lethal.

The Bills are picking slightly higher than they have in previous mocks because of a couple off weeks, but we’re sticking with them taking the top running back in the ’22 class. We like the fit and it’s a glaring need in Buffalo.

The Chiefs are surging right now, but they’re going to need to make some tough decisions with their elite group of receivers at some point. If they can bring in Burks, a terrific player, to replace a potential departure it makes sense and saves them money.

The Ravens need to protect Lamar Jackson at all costs. Petit-Frere has been a strong blocker for Ohio State and worked with mobile quarterbacks in the past (Justin Fields) so adding him to the mix would be a good addition to the Ravens’ offensive front.

What happens if Devante Adams leaves? That should be the Packers’ primary concern this coming offseason; Aaron Rodgers is likely gone and his top target may leave as well. Williams, who has split his college career between Ohio State and Alabama, could be the next No. 1 receiver in Green Bay.

The Bucs need a few things, but Davis would be an incredible long-term answer to the inside of the defensive line. He’s a game-wrecking player who would open the field for their linebackers (also a need). And, again, if Tampa’s draft at/near the end of the first round, they’ve had another good year.

Yup, we’ve got the Patriots winning the AFC now. And they’ve apparently found their offensive groove with a rookie quarterback. They might think receiver or running back here, but the more glaring need is at corner. Booth is a strong player who would fill that need well.

The Cardinals still have the best record in the NFL, but we’ll find out how much they need home field advantage this weekend when they play at what could be a snowy Soldier Field in Chicago. Protecting Kyler Murray is critical and Penning is a really good prospect.