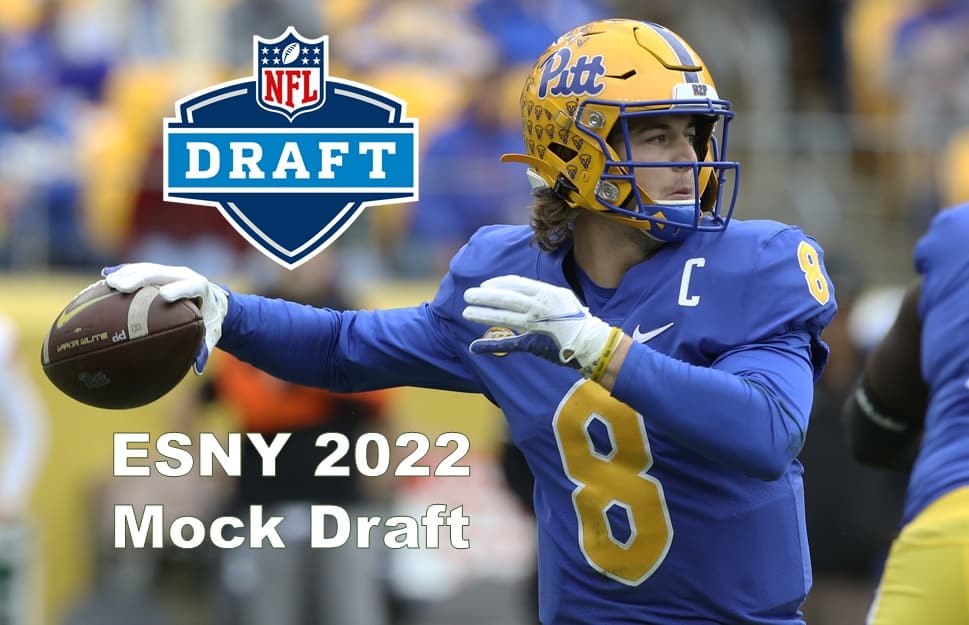 Detroit remains winless — and on the clock.

We’re now past the 2021 NFL Trade Deadline, and the Detroit Lions remain winless. They’re awful; Philly put it on them hard last weekend and the Eagles aren’t a good team. So we feel pretty good about mocking the Lions at No. 1.

The Broncos and Rams, meanwhile, made headlines before the trade deadline.

Miller is now saying his goodbyes to his friends in the Broncos’ training facility. pic.twitter.com/wJjlDOQkPU

From there, the draft gets tricky. The quarterbacks coming out this year aren’t great, but desperate teams have — and will — reach for a guy they think can be the guy.

So we’re gonna ramp it up this week and extend our mock draft to three rounds. Let’s get ready for the 2022 NFL Draft!

The worst team in the league is rewarded with the top pick in the draft, which should be the best player in the draft. Detroit has plenty of needs (obviously) but they need to take the clear-cut best player on the board. And, this year, that player is Kayvon Thibodeaux. He will change their pass rush immediately.

Houston, like Detroit, has more issues than Sports Illustrated. And, sitting at No. 2, they’ll have a lot of directions they could go here that addresses their needs. The elephant in the room will remain Deshaun Watson, who won’t play for them again. But protecting whomever is their quarterback in the future should be a priority. Neal is the best tackle in this class.

Philly has three picks in the first round and will aggressively look to improve their roster. Hamilton is arguably the best player in college football this year, but no safety is going to get Heisman Trophy love. He’s a game-changer on the back end in the mold of guys like Ed Reed and would be a huge add for them.

The Jags used the top pick on a quarterback last year. Now, they need to give him consistent targets in the pass game. Urban Meyer knows Olave well; he recruited him at Ohio State. He would slot in as their No. 1 receiver from Day One.

The Giants need an impact edge rusher desperately, and Hutchinson is a guy who reminds folks of the Bosa and Watt brothers — and not just because he’s in the Big Ten. Hutchinson would be an incredible add for the Giants here.

The Jets are fascinating here. Their defensive front isn’t a huge priority, but Leal’s flexibility to play inside or outside with his hand on the ground would make the Jets’ defense more dangerous. This may feel like a luxury pick… but the Jets come back in a few picks where they can address other glaring needs.

Washington needs a quarterback. But taking one here might be a reach. Their defense could use help as well, but if the top three defensive linemen are off the board they could look elsewhere. Adding another weapon outside to open up the pass game could be too tempting to pass up.

Does this feel too early for an interior offensive lineman? Absolutely. Is Linderbaum the best overall offensive lineman in the draft? Hell yes. If the Jets want to protect their quarterback(s), and the inside of their o-line is a glaring weakness, Linderbaum fixes that for the next decade. Reach? Perhaps. Incredible fit? Absolutely.

Blake Martinez could be a cap casualty for the Giants in the spring, making linebacker a need. Dean is a beast; go watch some take of Roquan Smith and ask yourself if that player would help the Giants. Hell, Dean would be an upgrade from Martinez.

The Eagles went safety with their first pick, so they’ll help their defensive front next. Karlaftis is a game-wrecker who would be good value for the Eagles in this spot.

After going defense with their first two picks, the Eagles now address their need for an offensive tackle. Cross is considered by most to be the No. 2 tackle in the Class of ’22 and would be a solid pick here for the Eagles. Philly also has two picks early in the second round.

Stingley is considered the most talented corner in this year’s class, so being available at 12 might not happen. But his season ended prematurely because of an injury and his play hasn’t been as awe-inspiring since his breakout freshman season. Miami could go quarterback or receiver here… or this pick could belong to Houston when the Dolphins finally pull the trigger on a Watson trade.

It’s time to draft the heir to Matt Ryan, and in this scenario every quarterback is still on the board. We like Corral to come in and learn behind Ryan for a year before taking the controls and leading the Falcons.

Minnesota’s defense needs help, and Jackson is a disruptive edge rusher who would be a solid add for the Vikings. They took a quarterback last year so, if they decide to move on from Kirk Cousins it won’t be in this draft. This is too early for them to look for a safety.

Sam Darnold has one year remaining on his contract and, despite his good start, the Panthers have been closing on the top ten in the draft faster than they’re working on playoff position. Willis would be their future quarterback, and taking him here gives the Panthers the ability to wait and see for a year.

We already mentioned the Von Miller trade, so taking a player to replace him here — especially one the quality if Anderson — makes too much sense. They added the Rams’ picks in the second and third rounds in the Miller deal.

If you haven’t heard, OBJ wants out of Cleveland. And he might get it soon; the Browns have sent him home from practice twice this week. Cleveland is a team that should be better, but they can’t get out of their own way. Wilson would be a solid replacement for OBJ.

Corner is a priority for the Patriots and they should be able to land a solid, starter-caliber player at the position in the first round. The Patriots also need a receiver, but the way our mock is playing out, Elam is better value here than one of the other receivers. They’ll address their pass game later.

The Chiefs’ defense sucks. So drafting a beast to bolster the inside of their defensive line makes a lot of sense. Davis is a problem to gameplan against and would change the Chiefs’ scheme dramatically.

When the Steelers traded Melvin Ingram, it opened up a need for someone opposite TJ Watt. Enagbare is one of the better outside linebackers — maybe the best — in this class and would be a great fit in Pittsburgh.

A broken leg ending London’s season could impact his draft stock, but when he was on the field he’s been exceptional. The Chargers will need to make a decision on Mike Williams in the offseason and may opt to draft his replacement and spend bigger money elsewhere.

With news on Tuesday that Henry Ruggs III’s career may be over stemming from a DUI that resulted in death charge in Las Vegas, the Raiders will need to pivot and consider a receiver in the first round again this year.

The injury to Jameis Winston makes this a fascinating spot in the draft. Will Sean Payton look to his future under center despite this being a relatively weak quarterback class? Or will he look to bolster his roster elsewhere? We’re betting they replace Michael Thomas instead of reaching for a quarterback.

Tennessee losing Derrick Henry could mean they’re picking higher than 24 in the spring, but with them resting here (for now) we love the fit of Hall. They could go a number of directions here, including receiver, but we’re going with one of the better players available.

How nice would it be for Gardner to stay in the same market after turning pro? He might be the best corner in the coming draft class and fills a need for the Bengals.

The Ravens’ offensive line could use a young addition inside to protect Lamar Jackson. Green would be a solid, athletic player to help their run and pass blocking. Jackson’s arguably the most important player to his team’s offense in the NFL so protecting him is paramount.

We’ve been mocking Lloyd to Tampa from the jump. They’re going to need the next generation of inside linebacker next year and he’s a tremendous athlete who would fill in perfectly.

The Aaron Rodgers Saga continues to take us to new places, but the Packers will likely be without both Rodgers and their No. 1 receiver next year. If they move on to Jordan Love next year, adding a receiver would be nice.

We like the fit of Nelson in Arizona. He’s an athletic tackle who could be a good fit with a mobile quarterback. Everything we said about protecting Lamar Jackson is true of Kyler Murray, and Nelson could help accomplish that goal.

Dallas’ offensive line is aging and needs some new faces. Johnson would be a perfect fit in Dallas. He can play inside or outside and may start at guard before eventually helping them at tackle.

The rich get richer. Spiller is the best running back in the draft next year and, though he would join a crowded room, would be the best one in the group. He would be a nice fit in Buffalo.

Pickett’s draft stock is skyrocketing right now. We like the idea of the Lions taking a quarterback at the end of the first round for the additional year of potential control and now Pickett’s the guy we could see the Lions targeting.