Julius Randle played with a big enough chip on his shoulder that he should have an MVP trophy on his mind.

Julius Randle is the most hope New York Knicks fans have had in a long, long time.

So much has happened since the team had a true MVP candidate. Eminem cemented himself as, probably, the best rapper of his generation. Fidget spinners were popular for about ten minutes. Oh, and who can forget Carmelo Anthony coming to the Knicks to restore the team’s glory, only to walk away with a scoring title and some All-Star berths?

Well, Julius Randle has changed that after looking like yet another random Knicks signing who would have a few good games over his brief stay, but not much else.

Boy, were we wrong. Randle is in shape, extended, and back for more. 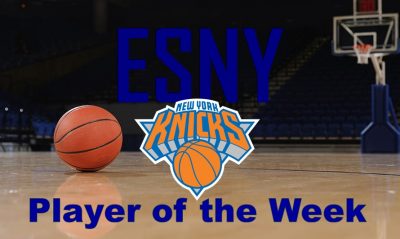 Julius Randle picked up where he left off

Death, taxes, Julius Randle almost having a triple-double. The new season is only three games old, and we’ve been on a Randle triple-double watch in two of them.

Let’s start with the bare stats. Through three games, Randle’s 28.7 points per contest rank seventh in the NBA. He has also kept up his passing game with 6.3 assists per game, and Randle’s rebounding is still effective at 11.3 per game.

His skillset was on full display in the season opener against the Boston Celtics. In the Knicks’ double-overtime victory, Randle registered 35 points, eight rebounds, and nine assists. Even better is that he only had three points and assists each in OT. The rest was all in regulation.

Granted, Julius Randle also picked up where he left off last year in that he’s already averaging 4.3 turnovers. But that’s also an inflated number thanks to committing seven in the Knicks’ first game. Plus, Dallas Mavericks star Luka Doncic averaged that many turnovers last season, and people worship the ground he walks on.

That isn’t to say Randle had a perfect week by any stretch. In fact, there’s plenty of ways he can improve his game.

First, fun as the near-triple-doubles are, they don’t need to be a nightly thing. In Sunday’s loss to Orlando, though he posted 30 points and 16 rebounds, Randle was only 8 of 24 from the field and 2 of 10 from three. This sunk his field-goal percentage to 43.3% for the short season, and he’s just 29.2% from long range.

Furthermore, maybe it was the zone defense the Magic played, but Julius Randle constantly looked like he was trying to be the savior. Even with teammates who could help him, it was as though he made the same mistakes he made last postseason. He tried too hard to be the Knicks’ main star player.

None of this is to say we’re due for a repeat of last season when Julius Randle literally carried the New York Knicks on his back with RJ Barrett & Co. chipping in accordingly. Three games is far too small a sample and we all know one good run can set Randle’s percentages right.

But at the same time, Julius Randle needs to remember he has teammates who can help shoulder that load. Evan Fournier is in New York to boost three-point shooting, but he was a primary scoring option for years in both Orlando and Denver. Kemba Walker hasn’t been much of a factor, but we can already see how much his leadership helps.

And who can for get RJ Barrett, who faithfully served as Robin to Randle’s Batman last season and showed his star potential? He’s gotten off to a rough start in the first three games, but Julius Randle and the rest of the Knicks need to be sure to get him involved more. He just brings so much on both ends of the court.

The New York Knicks have a busy week ahead with a visit from the Philadelphia 76ers on Tuesday, then hitting Chicago and New Orleans on the road.

Here’s hoping that not only Julius Randle continues to perform well, but the rest of his teammates too.

The Knicks paid RJ Barrett. Is a breakout season coming?