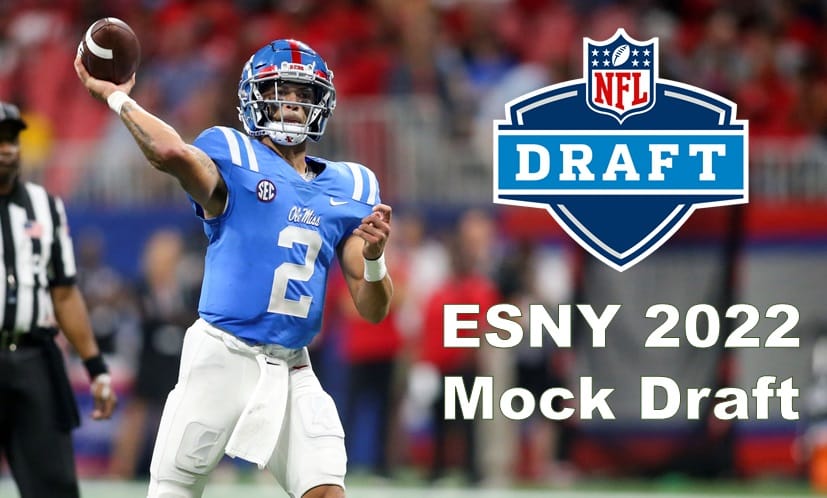 Jacksonville won a game! So Detroit is now on the clock…

The NFL season has started to sort out which teams are awful and which ones are legit championship contenders. However, there are a lot of teams in the middle of the pack battling for their present; others are mindful of their future as well.

We’re getting closer to the mid-point of the 2021 NFL season. So let’s crank up another two-round look ahead to the 2022 NFL Draft.

The Lions have ascended to the top pick in the draft by virtue of being the last winless team in the NFL. Which, of course, means they have plenty of needs. While you can’t draft scheme, you can draft talent. And Thibodeaux is the most disruptive defensive player in the coming draft class.

Here’s the problem for the New York Giants. The Eagles have three picks in the first round; they own Miami’s pick and Indianapolis’ picks in the first and second rounds. And the Dolphins and Colts are bad. So the Eagles are going to have the opportunity to make a huge impact on their roster in the draft.

They must protect Trevor Lawrence. Neal is the best tackle in this draft class and would be an upgrade to their offensive line immediately.

The Giants could go a number of directions here, but we’re leaning on them taking a potentially elite edge rusher. Big Ten fans might watch Hutchinson and think of the Watt brothers, or the Bosa brothers. He’s an absolute force who would be an impact player for the Giants.

The Jets are in a tough spot here. Maybe too early for another offensive lineman, maybe early for a linebacker, way too early for a tight end. Green is a terrific lineman who would help improve the inside of the Jets’ line protecting their franchise quarterback.

Houston’s got more issues than Sports Illustrated. But if they’re sitting outside the top five picks, the best player available may be Stingley. He’s an incredibly talented corner who would help their defense in an AFC with plenty of elite passers.

Our first quarterback comes off the board at seven, with Washington looking to their future. WFT and Atlanta are the two teams likely to be around this neighborhood in the draft that could use a new signal caller. Corral is a good player to build around.

The Falcons need to find the eventual replacement for Matt Ryan and do that here. Why take Willis, from Liberty, in the first round? First, his talent warrants it. Second, the extra year of control helps them keep Ryan around to teach Willis for a year (or two).

Philly’s first two picks address their defensive struggles in our mock draft. If they add Hamilton and Leal to their defense, it vastly improves the front and back ends of that side of the ball. Leal is a beast.

And, with their third pick in the top ten, the Eagles look to help their offensive line. They need a tackle and Kinnard is the next one on our list. He’s a solid player who would likely start from Game One next season.

The Jets’ second pick, like their first, could go a few directions. We like Harris, the best inside linebacker in the coming draft, to help lead their defense into the next generation. He’s a star in a strong defensive unit at Alabama.

The Patriots need a corner or a receiver. We’re betting, based on how this mock is playing out, that the Patriots opt to take one of the top route runners in the coming draft. Olave is a polished receiver who would be a solid target for Mac Jones.

Miami takes receivers almost every year, but they have a few coming off the books after this season and will need to replace them. Dotson is a stud; the bigger question is who is throwing the ball to the receivers in Miami next year. This is too early for a third quarterback in 2022, however.

The Steelers need an heir to Ben Roethlisberger at some point, but protecting their quarterback is also critical. Linderbaum might be the best overall offensive lineman in this draft and would be tremendous value for the Steelers here.

Minnesota will need a pass rusher and get a good one here. Karlaftis absolutely dominated Iowa in Purdue’s upset last weekend and is as disruptive as any edge rusher in this class.

Anderson would provide an athletic compliment to Von Miller — or, potentially replace him — in Denver. He’s got a great motor and plays well from sideline to sideline.

Davis is an anchor in the middle of the best defense in the country at Georgia. If Carolina wants to shut down opposing offenses, he’s the kind of guy to build a defense around.

Here the Giants look to address the interior of their offensive line. Kirkland could move in at either guard position for the Giants next year, keeping Daniel Jones (or, maybe, someone else) on their feet longer.

Jackson opposite Myles Garrett is a problem for opposing offenses. The Browns are going to be stuck in the same division as Lamar Jackson for a while, so having athletic rushers is a huge need.

Michael Thomas is probably gone next year, which means the Saints need a new No. 1 receiver. London might be that guy. USC receivers have historically done well in the NFL and he would uphold that tradition in New Orleans.

Injuries are pilling up on the Titans’ offensive front and starting to re-stock their line could become a priority. Nelson is an athletic tackle who would be able to get out in front of their aggressive run game.

Vegas is going to need a new head coach, and that might not be the only significant departure. So we’re going with the most impactful talent in an area they could use some improvement. Enagbare would be the best EDGE they’ve drafted since Khalil Mack left Oakland (yup, he left Oakland).

The Chiefs defense needs everything. Pass rushers, run stoppers and pass defenders. Elam could easily be gone a dozen picks before the Chiefs are on the clock, but he’s still available in this mock. So we’re sending the best corner available to Kansas City to help them stop the pass.

The Bengals’ defense could use some help on the back end. Gardner wouldn’t need to change zip codes, but he’d certainly improve his living situation with a first-round paycheck in his pocket. He’s an outstanding cover corner.

Putting Bonnito opposite Bosa would give the Chargers’ a defensive front that would continue to put pressure on the other quarterbacks in their division — and we’re speaking specifically about Patrick Mahomes.

Buffalo needs a workhorse running back, and Spiller is the best in the coming draft class for our money. He would give them another weapon in an already-potent offensive unit that has no problem putting up points.

With Detroit’s second pick in the first round we’re going quarterback. It’s clear Jared Goff isn’t getting it done, but we aren’t saying Strong is QB1 in Detroit Week One next year. Picking him in the first round buys the Lions an extra year of control.

Aaron Rodgers and Devante Adams could both be gone. Selecting a top-tier receiver to replace Adams will be easier than replacing Rodgers under center; Wilson is an excellent choice for the Packers.

The Cowboys have invested so heavily in their defense that it’s time to look back at the offense and where they’ll need to eventually replace aging players. The inside of their offensive line could be the first place to look, and Okwonu could be a solid addition.

We’ve had Lloyd to Tampa in almost every mock. He’s their kind of linebacker, and comes at the right time; they’ll need the next generation leader on their defense at some point. This is a strong fit.

If the Ravens are picking at 31, Jackson might have an MVP trophy at home and their fans are thrilled. But there will be areas they’ll need to improve. We’re going corner at this spot because of the pass-happy AFC requiring depth at the position.

Arizona is the final undefeated team in the NFL for a reason. They’re good everywhere. But we’re going to look at Joseph to be a leader in the secondary for the next decade. He’s a rising star on a terrible Northwestern team who would be a great addition for Arizona.