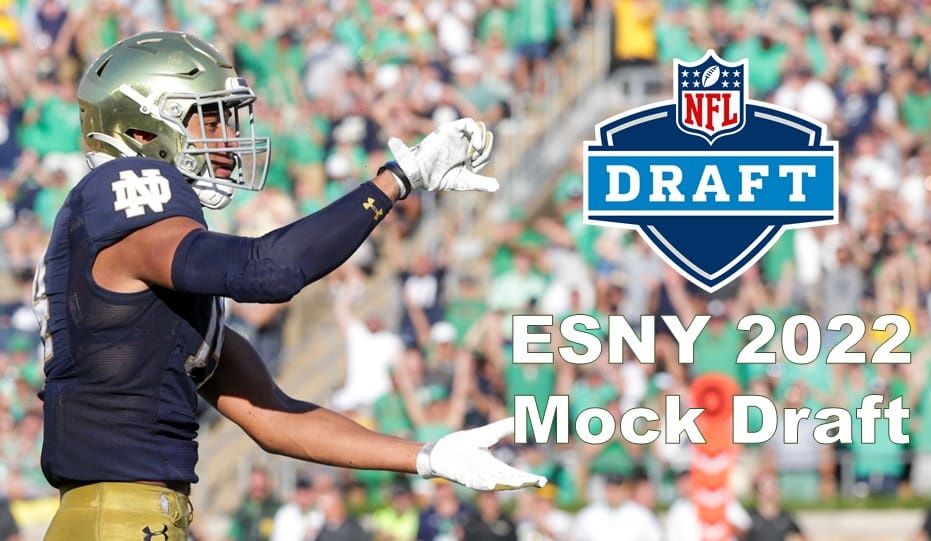 How many quarterbacks are picked in Round One?

This week we’re basically one-third of the way through the NFL season. Some teams have established themselves as title contenders; others have their fans looking ahead to the draft already.

This week we’re cranking it up to two full rounds. Who will your team select? Do they even have a pick in the first round? Let’s look ahead to the 2022 NFL Draft.

I guess the bigger question is: who will be coaching the Jags next year? They need to build an offense around their young star quarterback but they also need defense. Could they trade down? Sure. If they stay here, taking the best player on the board makes the most sense.

Stingley was dominant in 2019 but hasn’t been as good since. Even with that, he’s an incredible talent and would be a strong addition to a bad team. The Lions, too, could look to move back here. Or… move up to No. 1.

Hamilton to the Jets makes too much sense, whether they’re picking 1, 2 or 3. There’s a really good chance they need a new safety next year and Hamilton is good enough to warrant a top-three pick.

The Giants have two significant needs to address with their two picks in the first round: offensive line help and pass rush. They’ll be tempted to take Evan Neal here, but Hutchinson has been dominant at Michigan this season. If he’s another Big Ten pass rusher in the mold of the Watt brothers and Bosa brothers, this would be a huge add to the Giants’ defense.

Our first quarterback heads to Atlanta to eventually replace Matt Ryan. And this would be a good fit. Corral has a lot of talent and is playing against NFL-caliber players every weekend. It’s time for the Falcons to look to their future, and Corral is the best quarterback in this year’s class.

Houston needs everything. And, at this point, Neal is the best player available and fills a need. The Texans will eventually need to figure out their quarterback situation (David Mills ain’t it, folks) but Neal will protect whomever is under center.

If the Eagles work on the defensive line with their first pick, the secondary could be next. Booth is a top-level corner who would improve their secondary immediately. And, in a division with teams that like to throw, that’s a need.

Will Pittsburgh take a quarterback? Will it be in the first round? Our bet is yes, and no. They need to protect their quarterback better, and a weak class at quarterbacks makes fixing the line early a stronger play. Green would be an upgrade to their offensive line.

The news on Wednesday that the Patriots are releasing Stephon Gilmore makes corner an immediate need. They also have a need for a game-breaking receiver, but Elam is a good corner who would fill the void left by Gilmore.

With this pick, the Eagle address all three levels of their defense in the first round of the draft with strong players at each. Harris is a terrific linebacker who would become a leader. Taking three star players from strong programs would change the culture of their defense quickly.

If Minnesota is in front of Washington, they might be tempted to go quarterback. There’s also a chance they take the quarterback to eventually replace Kirk Cousins. But taking a strong edge rusher here also makes sense. Karlaftis is more likely to make an impact in 2022 than any quarterback in this year’s draft class.

The future arrives for Washington — again. Willis is a terrific talent who could buy time learning on the job until he’s ready. The WFT has been searching for a franchise quarterback for years, and might take another swing at the position this year.

As we said earlier, the Giants need to address their pass rush and their protection with their two first-round picks. Penning is an absolute beast who is flying up draft boards. If the Giants can land a starting OT and edge rusher, this draft will be a success.

The Titans have been a shocking disappointment thus far, and a lot of that is because they haven’t protected their quarterback. Linderbaum is the best center in this year’s draft class and would likely start Day One for Tennessee. If they want to get back to winning. fixing their O-Line is a need.

There’s a good chance Michael Thomas is gone after this season, making receiver a huge need in New Orleans. Dotson has emerged as the best receiver in this year’s draft class and has the speed to do real damage in the dome in New Orleans.

The second pick of the round for the Jets will present a few options. They could look to bolster their strong defensive group again here. They also might look at a top-tier receiver. But protecting Zach Wilson is too big of a need to pass. They’ll go line here, and Okwonu is the best lineman on the board.

The defense is still a problem in KC. Davis is an absolute beast who would be a wrecking ball in the interior of the Chiefs’ defensive front. They also have some tough decisions coming at receiver, but they need to stop opposing offenses at some point, too.

Cleveland’s defense is good already, but they could use a young pass rusher to compliment their front. There’s a chance they go receiver here, but Anderson would be a dynamic addition to an already-strong unit.

Cincinnati needs to protect Joe Burrow, but they’re also in a division that moves the ball. If they want to stop the run and get after opposing quarterbacks, Jackson would be the kind of pass rusher who would make an impact. It would be nice for the Bengals to be on the clock in the 20s for once, too.

Lamar Jackson needs help. And he needs time to throw. Cross is a solid tackle who would give them additional depth into the future as they look to lock-up Jackson long-term as their franchise quarterback.

What to do in Denver? Are they sold on Teddy Bridgewater beyond this season? Or will they look to take a quarterback in the first round — again? Our bet is they look to add to Vic Fangio’s defensive front with a strong pass rusher.

Carolina has been a nice surprise. What they do in the trade and free agent market will play into their thinking at the draft, but there is always a need for pass rushers. Sanders is a very good player who would help their defensive front.

Miami has taken receivers in the first round a few times in recent memory — including last year — but they have some receivers coming off the books this winter. If Olave is still available here it’ll be impossible for the Dolphins to pass on him.

Aaron Rodgers might be gone, and DeVante Adams might leave with him. Which means the Packers could be looking at a new era at Lambeau Field. A big target for whomever is their starting quarterback in 2022 is a smart decision.

The Raiders always go with the fastest, strongest impact player on their board. And, more times than not, it’s someone that doesn’t necessarily fill a need. So there could be any of a number of names here, but Enagbare feels like a player Jon Gruden could love.

At some point the Bucs are going to need to add a second star inside linebacker, and this coming offseason might be that time. Lloyd is arguably as good as any inside backer in this class and would be another strong pick to help an already-strong defense.

It appears Dallas has fixed their defensive issues after spending their offseason overhauling that unit. There’s a chance they look at a linebacker here after releasing Jaylon Smith earlier this week, but restocking their offensive line to protect Dak Prescott also makes sense.

The Chargers appear to be building something special. Adding another weapon for Justin Herbert would only make him more dangerous. Billingsley is the latest athletic tight end at Alabama who could slide into the late first round.

The Lions’ second pick in the first round will be fascinating — if they stay there. They need a game-changing receiver. Their defense needs a lot of help. But they also need the next franchise quarterback. Based on the number of really good receiver prospects sliding in our mock draft, we’re betting they go quarterback here to get the extra year of control. Strong could sit and learn behind Jared Goff.

We’re still looking at Buffalo adding depth at running back here, and Spiller is still the pick. He’s a dynamic back who could be the leader of their group quickly.

If the Cardinals stay hot all they way through the Super Bowl and own the final pick of the first round, this is luxury time in the desert. Kinnard is a really good interior offensive lineman who would play a critically important role: protecting Kyler Murray.