Volpe, Dominguez made a strong impression this year.

Baseball America recently ranked the top ten prospects who made a strong impression in the Low-A Southeast League in 2021.

Here’s where Volpe and Dominguez ranked in BA’s top ten and what they had to say about two of the Yankees’ top prospects.

Comments: “Volpe’s 2019 season—muted by a bout of mononucleosis—left plenty of questions about what the Yankees had in their first-round pick. After using the lost 2020 season to gain strength, Volpe put together one of the finest seasons in the minors.

“Volpe shined brightly at the plate, where he used an mature approach to work his way into advantageous counts and force pitchers to give him pitches to drive.

“Scouts and opposing managers rave about Volpe’s combination of hitting ability and power, which helped him become the only player in the minor leagues with more than 25 home runs and more than 30 stolen bases.

“There are questions about whether Volpe will stick at shortstop, mostly because his arm strength might be better suited at second base. The same exceptional makeup he showed working remotely in 2020 could help keep him at shortstop.” 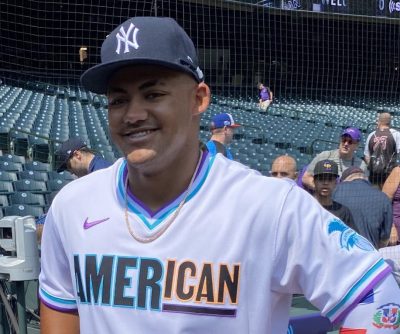 In his first season of professional baseball, Dominguez made history as the least experienced player to appear in the All-Star Futures Game. He was also the youngest to appear in the game since Vladimir Guerrero, Jr.

Comments: “The No. 1 international prospect signed in 2019, Dominguez held his own in his long-awaited pro debut, spent mostly at Low-A. He even earned a spot in the Futures Game.

“Those impressed with Dominguez cited the fluidity to his movements and the impact he made when he made contact. He posted an average and maximum exit velocities of 85.8 and 111.7 mph. He also showed a strong work ethic, as well as an even keel during the ups and downs of the season.

“Evaluators showed concern about how thick and stocky his body has become, leading to questions whether he can stick in center field. He still shows enough speed to play there but needs to continue to add polish to his jumps and routes. His above-average arm would fit in right field.

“More than anything, the 2021 season finally provided Dominguez the reps he needed to begin kicking off the rust he’d accumulated during the gap between signing and making his debut.”