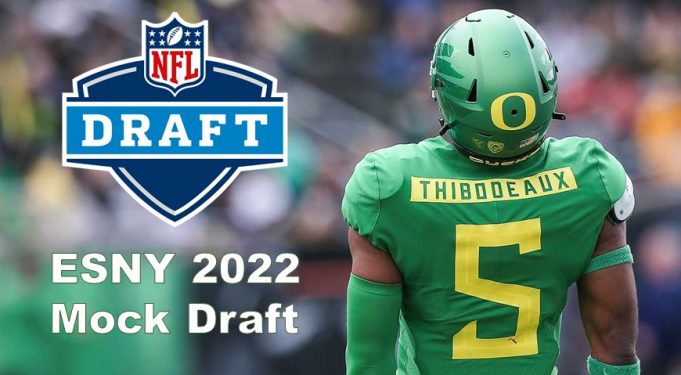 Ready for the 2021 NFL season to begin? Let’s look ahead to next year’s draft!

We are so ready for the 2021 NFL season to begin across the league. Sunday is going to be a beautiful day around football.

But even without a game being played, there are fans who are already looking ahead to the future. Every team “has a chance” but, if we’re honest, not every team is headed for the postseason and fans of those with limited hopes know it.

So let’s look ahead to the 2022 NFL Draft. How will the first round play out? Let’s do our best to predict Round One of next year’s draft!

Tyrod Taylor gets the start Week One because Deshaun Watson is still in legal limbo. Do you think the Texans are going to move into the future without a quarterback? We didn’t either.

Maybe a sleeper pick here at No. 2 overall, but Corrall could be this year’s Zach Wilson. If he has a huge season — which he started with a strong night against Louisville on Monday — it wouldn’t shock us if Detroit used this high pick for their next franchise quarterback.

Safety is going to be a position of need and Hamilton could be the second coming of Ed Reed. He had a huge first week against Florida State and is easily the top safety in this year’s class.

This Kyle Hamilton INT looks unreal from the wide angle but the endzone view is my favorite. Watch him appear out of nowhere and eat up this ground! pic.twitter.com/7jm1lPA8WK

Thibodeaux is a franchise edge rusher who would be incredible value if he falls to four. Cincinnati needs to protect their franchise quarterback, but they can do that later. Grabbing Thibodeaux changes their entire defense.

If Thibodeaux and Hamilton are off the board, the Jags will opt to protect the face of their franchise here. Neal is a beast and would be a huge upgrade over what they have now.

The Eagles have three picks in the first round, so they’ll be able to go best player available and address needs. Stingley is an alpha corner who would improve their secondary immediately.

Howell’s disappointing first game isn’t enough to crush his draft stock, but a rough season with a young group of skill players could hurt his top-10 spot. The Raiders will need a new quarterback at some point and Howell would be a nice add for Jon Gruden.

How about a dominant defensive end in Carolina? They haven’t had a player like Karlaftis in a minute, so adding him to their defensive front would be a big addition. They could opt to protect their quarterback… or, fix that position as well.

The Giants have the Bears’ pick in the first round as well, so they can grab a luxury with one of the two. Olave is the best receiver in this year’s draft class and would be a nice addition to help Daniel Jones. If Jones has a rough season, this could be a quarterback as well.

The Falcons have yet to draft the successor to Matt Ryan, but this might be the time to do that. Ridder is a stud who would bring additional mobility to the position whenever Ryan hangs up his cleats.

Here’s where things start to get interesting. Leal is a dominante interior defensive lineman who could bolster the Giants’ defensive front if they have defections in free agency after this season. We’re not sold on an offensive lineman here, so the Giants could trade up/down if that’s their most glaring need.

The Broncos are going to roll with Teddy Bridgewater to start the season, but the veteran isn’t their long-term answer under center. Willis is a supreme talent who would bring a versatility to the position that reminds some of a young Bridgewater.

The Steelers will need to replace Ben Roethlisberger at some point, but they need to protect him/whomever is the next quarterback as well. Green is a strong interior offensive lineman.

WFT has plenty of needs on the offensive side of the ball. They may look for a quarterback here, but adding another terrific weapon outside (from Ohio State again) would help whomever is their future quarterback.

The Saints are another team that needs a quarterback of the future. But if Jameis Winston looks good enough for a couple years in New Orleans, protecting him is a good idea.

Minnesota needs a future quarterback. But we’re not sold on one being the right choice here. Battle would be a leader and signal caller in their secondary, an area they need to help at some point.

Here come the Eagles’ second and third picks of the first round. Hutchinson is as good as any defensive end in this draft, so picking him here is a strong play.

If you’ve addressed your defense, why not look at helping the offense at this point? We like Walker’s ability to protect the quarterback and drive the run game, making him a good pick here for the Eagles.

Must. Protect. Kyler. Murray. The Cardinals have invested plenty of money in their skill position players. Now, let’s buy Murray time to make plays with his legs and arm.

The Chargers appear to have their future quarterback. And their defense is loaded. So how about an every-down back to carry the ball?

Dallas’ once-mighty offensive line is in shambles right now. They built from the line and will need to go back to that mindset. Linderbaum might be the best interior offensive lineman in this class.

The Patriots are rolling with a rookie quarterback who, coincidentally, has played pretty well with Metchie in the past. How about a Bama reunion in Foxboro?

Georgia’s defense played well enough against Clemson that a few of their players could see their draft stock skyrocketing in the coming weeks. Anderson coming off the edge in Tennessee would be an athletic addition.

The Browns need to identify someone to take pressure off the big guy on the other end of their defensive front. Harrison would be a local product from up the road in Columbus who could be that guy for the Browns.

Maybe they aren’t sold on Tua and go quarterback here. If they’re at least intrigued by Tua by the end of the season, improving in front of him is a need. Nelson would be a nice pick here.

Will this draft be the first post-Aaron Rodgers in Green Bay? It looks like it might be. They also might need to replace Davante Adams outside. But the Packers have looked to improve their defense recently and Bolden would be an upgrade at safety.

The Ravens taking a linebacker who can cover every inch of the field? Sounds familiar. Bonnito is a stud and would be their inside backer for the next decade.

Another pick for the Lions could have them helping their secondary, which always seems to be a problem. But who knows what Detroit does at this point?

We know the Bills have taken a running back named Spiller in the past and it didn’t work as well as they would have liked. But this Spiller would be a better bet to provide offense on all three downs than a few guys on their roster.

At some point the Bucs are going to need to replace one of their all-time greats at linebacker. So taking Harris, a leader at Alabama, would provide the next generation in the middle.

The Chiefs are going to have financial decisions to make in the coming season(s) and that creates opportunities for them to take the best player available at a position of need. Elam would help their secondary.