Our final power rankings before the 2021 MLB All-Star Game.

The MLB Draft begins on Sunday night, the MLB Future’s Game is also Sunday and then we get to watch an exciting Home Run Derby and All-Star Game. What a fun few days coming for baseball fans!

Then we turn our attention to the trade deadline. Who will buy? Who will overpay? And which teams will move on from a franchise anchor? We’ll find out soon.

Here we go with the final power rankings before the break. Who’s your No. 1 at the mid-point of the season?

The Astros enter Thursday with a six-game win streak and own the best record in the American League. Jose Altuve won’t play in the All-Star Game but the ‘Stros are built to last. This is a scary team — and they’re going to get Alex Bregman back soon.

Winners of seven of their last ten, they’re right on the Astros’ heels for the top spot in the AL and our Power Rankings. They’re going to get a boost when Chris Sale returns as well.

The big news on Thursday was Eloy Jimenez is headed on a rehab assignment, beginning Friday. They DFA’d Adam Eaton because of their depth; Chicago’s Sox are a near lock to win their division and could run deep in October.

They’re only 4-6 in their last 10 but still own the best win percentage in the game. The Giants are an impressive 27-13 in San Francisco and simply refuse to let the Dodgers and/or Padres move into first in the National League West.

The Brewers have grabbed the NL Central and there doesn’t appear to be much pressure coming from the Reds, Cardinals or Cubs. Their pitching has been exceptional; they might buy a bat or two before the deadline.

The Dodgers could probably be higher but they dropped three of four in Miami this week. Trevor Bauer’s suspension was extended on Thursday for seven more days and Clayton Kershaw is now in the IL.

They threw a seven-inning no-hitter against the Indians hours before the Lightning won the Stanley Cup. Vidal Brujan joined the major league roster with a bang and now Tampa’s set up for another October run.

The Padres have a strong run differential and continue pressing the Dodgers and Giants out west. The big question is whether or not they can keep Fernando Tatis, Jr. healthy for the second half.

Cincy has won seven of their last ten and might emerge as the second-best team in their division. They’re still trying to get their pitching on track but their bats have been good all year. 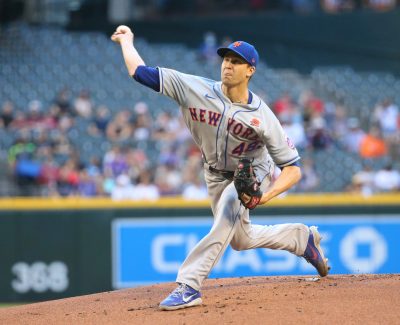 The Mets continue to lead the NL East and have the best pitcher on the planet in Jacob deGrom. If they can get/stay healthy in the second half they could be a strategic buyer at the deadline to make a run.

The A’s have lost seven of their last ten but still have a good shot at a wild card spot in the American League. We’ll see if they rent a star for a stretch run.

Toronto has pulled ahead of the Yankees and could be a big-time buyer before the deadline. They could use a couple arms and might get into the mix on Craig Kimbrel.

The Angels have won eight of their last ten — without Mike Trout, who could be back soon after the break. They’re suddenly a team that could buy if they hang around the A’s rearview mirror enough.

The M’s are .500 in their last ten games but their young bats are starting to get comfortable. If they want to go crazy and try to push the Angels, A’s and Astros their GM certainly has a history of making blockbuster trades.

Votes of confidence haven’t made the Yankees a bigger threat. They still need a left-handed bat in the lineup and could use a few more arms, not to mention some consistency from their closer.

The Marlins get a big arrow from us this week. They won the first three games against the Dodgers and picked up Don Mattingly’s option for next year. They aren’t ready to compete yet but they’re coming.

The Braves, like the Marlins, get a little bump ahead of Washington because they have positive run differentials. Atlanta has been plagued by injuries to their pitching this season but their offense is still potent.

Juan Soto will be in the Home Run Derby but the Nationals didn’t get as much love as some felt they should for this summer’s All-Star ceremonies. Will they sell at the deadline? Max Scherzer is in the final year of his contract and could help a club go for it all.

The Tigers have won seven of their last ten and their young pitching is starting to work. With the draft coming this weekend, Detroit could look for another young bat to help the offense catch up to the pitching.

They finally won a game on Wednesday night after dropping 11 straight. The National League Central isn’t distinguishing itself this season but the Cubs’ losing streak may push them into making hard decisions with Kris Bryant, Javier Baez, Anthony Rizzo and Kimbrel.

Somehow the Cubs lost 11 in a row and they’re still ahead of the Cardinals in the standings. The loss of Jack Flaherty has been enormous, and the bounce from adding Nolan Arenado hasn’t been there.

They could be a little higher but they suffered the loss that broke the Cubs’ losing streak. If you’re the slump-buster for a double-digit losing streak that hurts.

The “best of the worst,” the Rockies are 6-4 in their last 10 — the only team in the bottom eight of our rankings to be over .500 in their last 10. Trevor Story will participate in the Home Run Derby but might not be in Denver long after the event.

Will they trade Joey Gallo? This has been a rough rebuild season in a new stadium but many expect the Rangers to spend a lot of money to change their future this winter.

We’re giving them a bump just because we love everything about Cedric Mullins. The kid is going to be a star and is rightfully headed to the All-Star Game.

When will Bobby Witt Jr. get to Kansas City? That’s the only reason to watch them at this point. They do have some players who would help teams buying at the deadline, however.

Another disappointing series against the White Sox cements their spot as the biggest bust this season. Will Nelson Cruz finish the year with the Twinkies?

They’re bad. But they could help teams with title hopes if they decide to move some of their more interesting players at the deadline.

They were no-hit for the third time this season (albeit a seven-inning no-no) and have lost nine in a row. They should be higher than this based on overall record but these are bad times in Cleveland.

More like zinc-zirconium backs, amirite? The for sale sign should be up and veterans should be moving out of the desert soon.