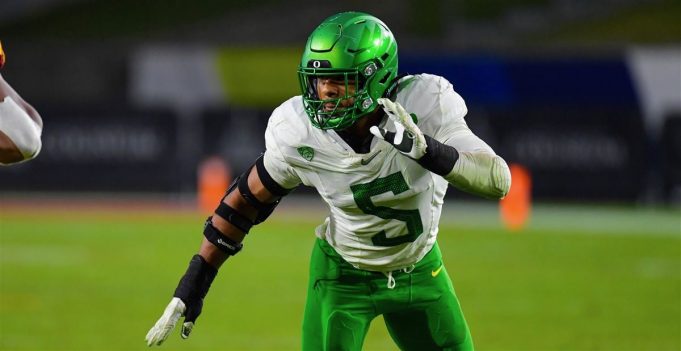 How could the 2022 NFL Draft play out? It feels early, but it’s worth looking ahead to a solid class of prospects.

We’re one week away from June 1, a significant date on the NFL calendar. Many cap numbers change dramatically on June 1, so surprising trades and cuts could be coming next week. Some have already been made in theory, but won’t be official until the calendar changes.

For example, the Chicago Bears already told OT Charles Leno he’s going to be let go but the paperwork won’t be official until June 1. Waiting until June saves the Bears roughly $9 million.

The most significant name to watch in the NFL right now is Aaron Rodgers. His cap hit drops to $14,352,000 on June 1 if he’s traded, a cap savings of more than $22 million. It made sense all along that the Packers would wait if they were planning to do something because of the financial implications. Rodgers is not attending Packers OTAs this week.

Will he find a new home in the new month?

So let’s jump into a mock draft before some big time cuts and/or trades happen in the next week. Here’s how we see the first round playing out next spring.

The Texans have a huge mess at quarterback not knowing how the legal and civil processes will play out with Deshaun Watson. They did, however, draft a quarterback with their first pick in this year’s draft; Stanford’s Davis Mills is their insurance policy and he’s a good one. So they’ll hope to replace JJ Watt with the top pick next year.

if the Lions are indeed selecting in the top five again, it means the Matthew Stafford-for-Jared Goff trade didn’t work out as well as they had hoped. Rattler’s a baller who would be our top pick at quarterback in next year’s draft.

The Bengals have their franchise quarterback. And they drafted him a receiver in the first round in 2021. Their defense still needs help and Stingley looks like he’ll be the top corner off the board next year. He would be a huge improvement in the Bengals’ secondary.

The Jags are clearly all set at quarterback, running back and tight end (LOL at Tebow). But protecting Trevor Lawrence will continue to be their priority. Neal is the best tackle in the Class of ’22 so we’re projecting Urban Meyer to invest in keeping Lawrence on his feet next spring.

The Jets have to decide what they’re doing with Marcus Maye in the next 12 months or so. If they bring him back, this pick could be different. But Hamilton is an elite safety who would affordably replace Maye, who isn’t happy about heading into a walk-year.

The Eagles are slated to have three picks in the first round next year. And they have some expiring contracts they’ll need to deal with between now and then. Tight end could be a position of need for them after the ’21 season and Wydermyer is the best in next year’s class. They’ll be able to be both aggressive and active in the draft next year.

If the Raiders are picking in the top ten, the Derek Carr Era will likely come to an end. Slovis is a big, strong quarterback from USC – the resume of a player the Raiders could easily fall in love with between now and being on the clock.

The Giants have had a really nice offseason this year, but Vegas doesn’t like their chances to win games (still). If they’re in the top ten picks again next year, there’s a chance they’re looking for a new quarterback here. But we’re betting the issues aren’t all with Daniel Jones so they’ll take a top defensive lineman.

Atlanta needs to weather the storm this year financially and then they can look to be more aggressive before the 2022 season. Matt Ryan re-worked his contract so there’s a better chance the Falcons look to draft an heir next year. Howell is a top-rated quarterback who would be an easy fit here.

You don’t need to remind us they have Sam Darnold at quarterback heading into 2021. That’s why we have them selecting a franchise quarterback in 2022. If they’re back in the top ten, Darnold wasn’t the answer. Ridder is a terrific talent who would be a good fit in Carolina’s system.

* Note – the odds are in flux with the Packers right now because of the Rodgers situation. We’re slotting them in as a playoff team, winning the NFC North. That would change dramatically if they trade their franchise quarterback.