Derrick Rose’s scoring and leadership are why the New York Knicks must make him a free agency priority with Julius Randle.

Read that sentence to yourself five years ago, and it’s almost laughable. Five years back, Derrick Rose was an oft-injured former MVP whose hometown threw him away. A year with the Knicks later, and he became a journeyman backup point guard.

And yet, Rose has not declined in this role but flourished. His star hasn’t faded, but almost burned brighter. In the case of the Knicks, they have gone 22-11 with Rose since acquiring him from the Detroit Pistons earlier this year.

All this to say that even though the New York Knicks are back in the playoffs, the offseason will be here before we know it. Important as it is to extend Julius Randle, it’s equally vital that Rose be retained as well. 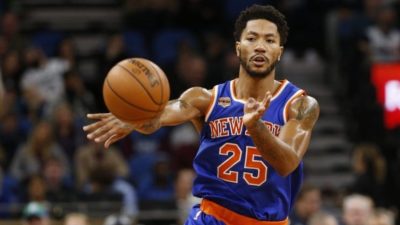 A star in his role

During his first go with the Knicks, Rose averaged 18 points and 4.4 assists per game and shot 47.1% from the field. Those numbers aren’t awful on face value, but a deeper look shows Rose was a good player on a really bad team. He posted 0.68 win shares per 48 minutes (WS/48) and only had a 0.5 VORP.

Rose then served as a backup in Cleveland, Minnesota, and Detroit before returning to New York. It was with the Timberwolves where he reunited with Tom Thibodeau and subsequently found new life. The man who coached Rose to an MVP trophy salvaged his career.

Since that first stint with the Knicks, Rose has averaged 15.8 points and 4.2 assists. He’s shooting a consistent 47.7% from the field and a much-improved 34.4% from three. His VORP is a respectable 3.4.

Rose is also doing all of this at 32 years old, and it’s clear being a backup point guard is helping prolong his career.

Simply put, as long as Tom Thibodeau is the coach the New York Knicks need Rose on this team. The two know how to work together and just understand each other. Moreover, on top of embracing his role off the bench, he’s proven to be a strong leader on the young Knicks without trying to do too much.

“I just try to fit in,” Rose said, per Mike Vaccaro of the New York Post. “Look and see what the game needs and just try to fill that void.’’

Consider this. Rose is currently in the last year of a two-year, $15 million deal he signed with Detroit, a rebuilding team that just needed a veteran. On a winning Knicks team, that number can easily be bumped up. For argument’s sake, let’s say three years at $34.5 million.

Seeing as how the Knicks only have $32.2 million in guaranteed contracts for next season, there’s literally no reason they can’t re-sign Rose while also properly taking care of Randle.

Amidst all this, we haven’t yet touched on just how good Derrick Rose has been since coming back to the Knicks. Sure enough, they only build his case for a new long-term contract keeping him in New York.

Rose has posted 15.1 points and 4.3 assists with the Knicks and is shooting 48.7% from the field and 40.9% from long range. To add some context, he is a 31.1% career three-point shooter. He’s obviously worked to make his game more compatible with today’s NBA.

More importantly, Derrick Rose was back in MVP form during the Knicks’ recent road trip. He posted 22 points and 4.8 assists in six games, making over 60% of his shots and nearly 40% of his threes.

He is guaranteed to succeed playing for Tom Thibodeau and is the best team leader the Knicks have had in literal decades. Even better, he won’t be overly expensive.