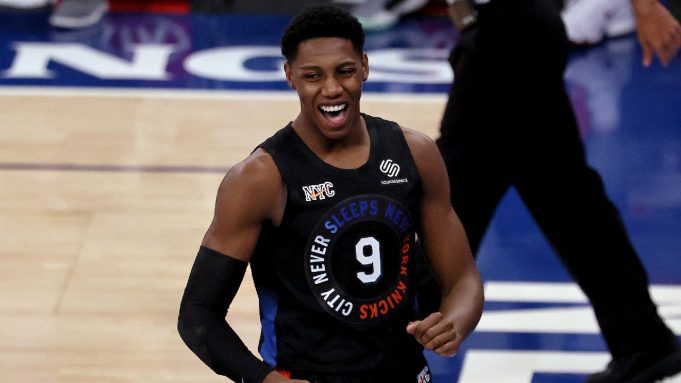 The New York Knicks hoped for a big win at home before embarking on a six-game west coast road trip.

The New York Knicks didn’t have time to mourn their nine-game winning streak ending against the Phoenix Suns on Monday night.

The Chicago Bulls visited Wednesday, the Knicks’ last home game before heading on a six-game road trip out west. With Zach LaVine out for health and safety protocols, New York was positioned for a big win. Oppositely, the Knicks also welcomed back sixth man Alec Burks from the COVID list.

Which New York Knicks would show up to Madison Square Garden for this game? Would they dispatch of the lowly Bulls and hit the road on a high note? Or would they suffer a shock defeat worse than any abuse doled out at The Wieners Circle?

The New York Knicks defense was on full display in the first quarter and didn’t allow a single Bulls three-pointer. It was clear instead of running a New York City marathon, the Bulls wanted a Chicago sprint and to score a bunch in a hurry.

Given how the Knicks led 32-19 after one, Chicago’s strategy didn’t work. New York shot 60% from the field and went on a 13-2 run at one point. Julius Randle continued his great season with 14 points, and RJ Barrett added eight of his own.

Chicago closed the first on a 7-2 run, but it didn’t really matter. New York’s defense controlled the start of the game.

The New York Knicks got cocky after a strong first half. Remember how the Bulls closed the first quarter on a 7-2 run? The Knicks’ defense turned so bad early in the second that it wound up being a 20-4 run in total.

Granted, the Knicks later went on a 9-0 run, but the Bulls closed strong too. New York led 52-48 at the half, but only after getting outscored 29-20. Was Ferris Bueller in the building? Because the Knicks might as well have taken that quarter off.

All in all, it was a humbling quarter for the New York Knicks. The Bulls controlled the pace of play so much that you’d think it was the ’90s again!

3rd quarter: Is this real?

Instead of coming out and dominating the third quarter, the New York Knicks were very much the same. The team struggled to make shots in the third despite trading 9-0 runs with the Bulls. Chicago continued to play great defense and was more than happy to let Nikola Vucevic beat New York in the paint.

With six games in ten days coming up, the last thing the Knicks needed was to play sloppier than a bodega salad bar.

4th quarter: We are the New York Knicks

The real New York Knicks showed up in the fourth and finally dominated the way they should have all game. Immanuel Quickley scored seven quick points early in the quarter, and the rest was smoother than Rao’s signature gravy. He finished with 13 points, 11 of which came in the fourth, and Randle turned in another 30-point game.

The Bulls, meanwhile, were stunned at the sudden new-look Knicks. They were outscored 37-19 in the last frame and failed to keep up the momentum they had for half the game.

It wasn’t the prettiest win for the New York Knicks, but one desperately needed before a long trip.

Player of the Game: RJ Barrett

Barrett was aggressive on both sides of the court, scoring 22 points with seven rebounds while taking just 15 shots.