Let’s look at how all 31 NHL teams stack up with COVID-19 issues on the rise.

With COVID-19 affecting the schedules of several teams and the trade deadline approaching, the NHL is getting interesting. Teams are already engaging in trades and we’re seeing some interesting names on the waiver wire.

Playoff races are becoming heated by the minute, which should make this time of the season quite intriguing. How do all 31 teams stack up as we’ve entered the beginning of April?

The Sabres are still the worst team in the league, but smashed the Philadelphia Flyers to tie and not break the 2003-04 Pittsburgh Penguins’ record of most consecutive losses in history.

The Sabres were in the news for other reasons, of course. They traded center Eric Staal to the Montreal Canadiens for a third-round and fifth-round pick in the upcoming draft.

Interestingly enough, Montreal was one of the destinations on Staal’s no-trade list. That’s how badly things have gone in Buffalo.

The Red Wings have dropped two in a row, but are coming off a decent week in which they went 2-1-1 while outscoring opponents 9-8.

The Senators were affected by Montreal’s COVID issues and played just one game over the past week. It was a 4-1 loss to the Canadiens and the Senators have now dropped two in a row.

It was still a relatively busy week for the Senators, who traded 26-year-old left-handed defenseman Christian Wolanin to the Los Angeles Kings in exchange for 24-year-old center Michael Amadio.

Amadio might not see a ton of ice time with Ottawa, but could be valuable on their taxi squad.

The Ducks had a pretty decent week, going 2-1 while outscoring opponents 12-11. This will be a team to watch as the deadline approaches.

The New Jersey Devils had another unimpressive week, scoring just five goals in three games, but were in the news.

They placed 28-year-old right winger Nikita Gusev on waivers on April 1. Gusev has struggled mightily this season and looks like he isn’t that lowkey special forward many thought he could be.

At least not in New Jersey. Can the Devils move the impending unrestricted free agent in a trade if he clears waivers?

He did it: Patrick Marleau is now second all-time in games played. It’s a very nice milestone for a great player during a season that hasn’t gone well at all for the Sharks.

The Stars went 1-1-2 this past week and are watching their playoff hopes fly out the window. They really need Tyler Seguin and Ben Bishop back and might be active buyers at the trade deadline.

After hitting the ground running, new coach Darryll Sutter can’t seem to get his guys to string together some wins. Maybe calling out the face of your franchise publicly isn’t the best of ideas, regardless of his track record there.

The Canucks are the only team that didn’t play a single game over the past week. They have several members of the organization on the COVID-19 protocol list and won’t be able to resume practice until April 6 at the earliest.

They’ll hope this extra rest will get them fueled when they do return, as they’re going to continue to try to make a late playoff push.

The Kings played just two games over the past week and haven’t looked tremendous lately, but they might still be hoping to build around their hotter players to push for a playoff spot.

They acquired 26-year-old left-handed defenseman Christian Wolanin, who will report to the Kings’ AHL affiliate the Ontario Reign, in exchange for 24-year-old center Michael Amadio.

They also acquired 25-year-old left winger Brendan Lemieux from the New York Rangers in exchange for a fourth-round pick in the 2021 NHL draft.

We’ll have to see if either of these players, especially Lemieux, end up making a difference in the Kings’ playoff race.

The Blue Jackets are still in it, but they’re going to have to start winning games if they hope to get to the playoffs.

They went 1-3 this past week and desperately need Patrick Laine to begin contributing. Maybe that commences with John Tortorella finding a better way to use him.

The Blackhawks are in a similar situation to the Blue Jackets. They exceeded expectations for a good chunk of the season, but have cooled down significantly.

They probably were overperforming, but a spot in the playoffs isn’t out of the question just yet.

Arizona’s offense still isn’t good, but the Coyotes are quietly taking advantage of the struggles of fellow western teams to climb the rankings. They went 2-1 this week and are now just one point out of a playoff spot.

The Flyers went 2-1 this week, but suffered an embarrassing 6-1 loss to the Sabres, who were on one of the worst losing streaks in NHL history.

Coach Alain Vigneault is up to his old tricks, publicly saying struggling goalie Carter Hart must work harder not long before defenseman Shayne Gostisbehere was placed on waivers. What a season this has been for the Flyers and their fans.

Don’t look now, the Predators are getting hot. The Predators began the season underperforming like crazy and were one of the worst teams in the league. They’re now sitting in fourth place in their division.

If they can keep scoring goals, they won’t have a problem getting to the playoffs. Juuse Soras’ goaltending deserves praise, too. He was named the NHL’s third star of the week for his recent stellar play.

The Blues played just twice this past week, but are on a four-game losing streak (worst in the league). The benching of Mike Hoffman sums up the team’s struggles. They can kiss the playoffs goodbye if they don’t figure out how to get the puck in the net.

The Rangers keep finding ways to win after losing one or two in a row. After a rough start to the season, both on and off the ice, the Rangers are now just three points out of a playoff spot in the most difficult division in the league.

Their number one defenseman Adam Fox deserves much praise for the contributions he’s made. The 23-year-old recorded 20 points in 15 games in the month of March and was named the NHL’s first star of the week.

Fans will hope top prospect Vitaly Kravtsov can help them get to fourth place whenever he is brought into the lineup.

The Rangers shipped 25-year-old left winger Brendan Lemieux to the Kings in exchange for a fourth-round pick, a good return for a guy who was one of their worst players at the time of the trade.

The Bruins continue to struggle to score at even-strength. For that reason, look for them to be buyers at the deadline. They might lose their spot in the playoffs if they aren’t.

The Canadiens played just twice this week, but won both games and are on a three-game winning streak. The hope is that the newly-acquired Eric Staal can help them stay hot and hold onto their playoff spot.

The Oilers still have depth-related issues, and this was on full display during an underwhelming week in which they scored six goals in three games. Edmonton is another team that could be interesting in acquiring some goal-scorers at the deadline.

The Wild have done so well with the worst power play in the league. Imagine how much better they’d be if they could start clicking on the man-advantage. Does this mean they’ll go and get a forward who can help them on special teams? 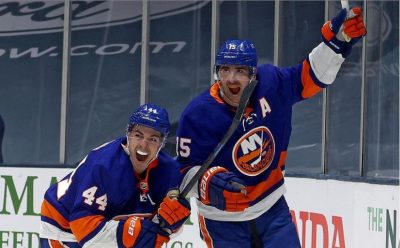 The New York Islanders had been struggling against the Penguins all season, but that was more so the case without their captain, Anders Lee. His absence is glaring and it’s imperative that the organization finds a substitute for him at the trade deadline.

It has become clear that the Jets have one of the best forward groups in the league. However, there’s room for improvement at the blueline. They can transform into true contenders if they add a defenseman or two at the deadline.

The Capitals are undeniably one of the best teams in the league, but goaltending has become an issue that no one’s really talking about.

After emerging as an incredibly pleasant surprise, Vitek Vanecek has been struggling lately, and Ilya Samsonov hasn’t been much different. Henrik Lundqvist’s absence is more glaring than most would have expected.

It looks like the Alex Galchenyuk trade was a good one. The center has been producing for Toronto since he was acquired from the Carolina Hurricanes and will give this team even more depth down the road.

The Lightning are coming off a disappointing week by their standards in which they went 1-2 and were outscored 7-9. Their usually-elite penalty kill hasn’t been great during this rough stretch, and players will have to work on staying out of the box.

One of the best teams in the league, the Golden Knights are in the process of welcoming back defenseman Alex Pietrangelo and goalie Robin Lehner. This just might be the deepest team in hockey.

Top forward Teuvo Teräväinen remains out with a concussion, but the Hurricanes did welcome Vincent Trochek back into the lineup.

Center Martin Necas has been superb for the Hurricanes, something that caught the attention of the league. Necas was named the NHL’s second star of the week and will look to maintain his great play.

The Avalanche are buzzing and must prioritize staying healthy as they look to overtake Vegas for the top spot in the west.

The Panthers hold the second-longest winning streak in the league, going 4-0 over the past week while outscoring opponents 15-7 and are tied with the first-place Lightning in points.

Unfortunately, they lost key defenseman Aaron Ekblad to an injury will keep him out for around 12 weeks. Will they find some type of replacement for him at the deadline?

Somehow the more injuries the Penguins suffer, the better they get. They have won a league-best five games in a row and are in a three-way tie in points in their division.

Once an area of concern, the defense is stepping up in a big way. We don’t know if it’s sustainable, but this Pittsburgh squad has become the team to beat.