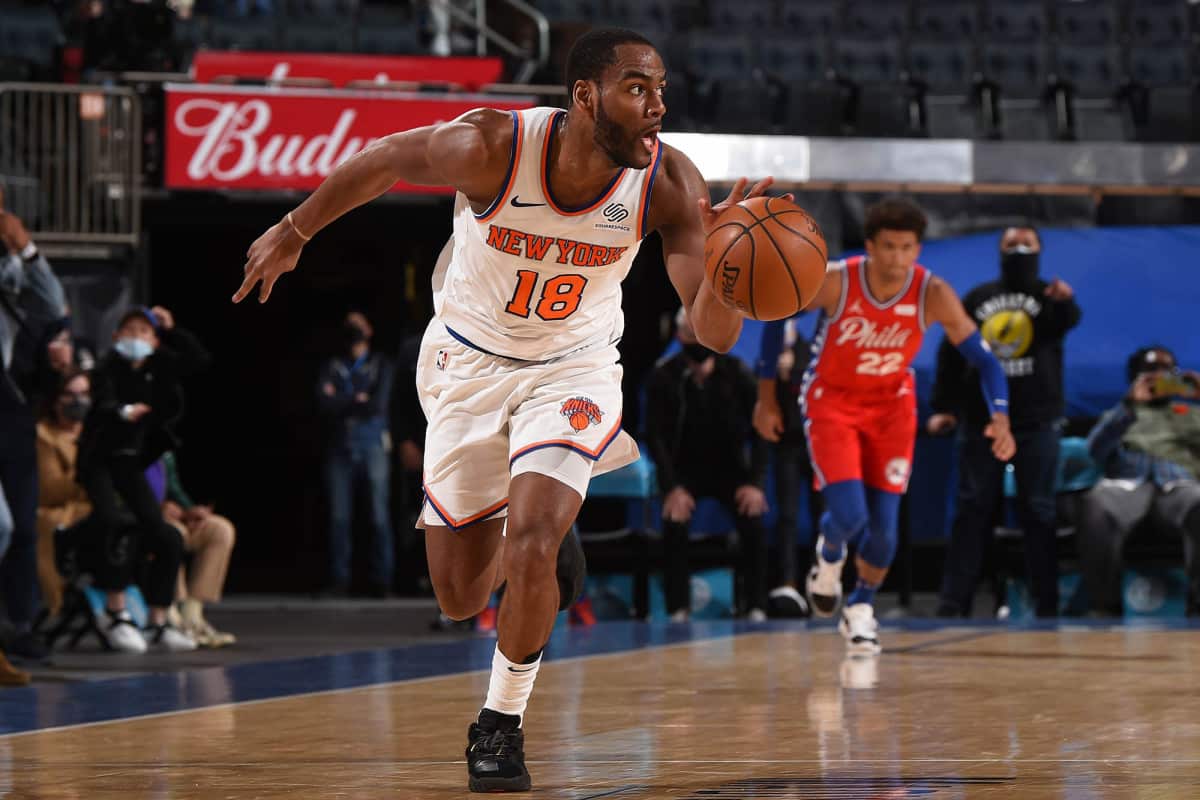 Alec Burks has had a phenomenal season for the New York Knicks, and yet is barely in the conversation for Sixth Man of the Year.

Alec Burks is a fascinating player.

He was an athletic 2-guard in two seasons at Colorado, yet couldn’t really shoot; he and made just 31.3% of his threes in college. Despite that, the Utah Jazz drafted him 12th overall in 2011, one pick after Klay Thompson and three before Kawhi Leonard.

Since then, Burks has overcome injuries and other obstacles to carve out a niche for himself in the NBA. Though not a star, he has made a name for himself as someone who can provide a scoring boost off the bench. Burks is also not an elite defender, but a competent one, and he can start in an emergency.

Meanwhile, this season, Alec Burks has proved to be a great one-year signing for the New York Knicks. He scores in multiple ways and, despite the lack of notable stats, has been a boon for coach Tom Thibodeau.

And yet, Burks isn’t a strong contender for Sixth Man of the Year, so let’s change that now.

Let’s start with the bare numbers. In 33 games (four starts), Burks is averaging 13 points per game and shooting a not-so-great 41.8% from the field, but he’s shot nearly 40% from three. Even so, these numbers don’t necessarily scream, “OH MY GOD, GIVE HIM SIXTH MAN OF THE YEAR!”

But let’s dig a little deeper. Burks is currently averaging 26 minutes, and his per 36 numbers put his scoring at 18 points per game. His true shooting percentage (TS%) is at 55.5% and his win shares per 48 minutes (WS/48) are just above the league average at .120.

And more recently, Burks has been playing on another level. He scored a season-high 27 points in Thursday’s win over the Washington Wizards, his fourth-straight 20-point game. In those four games, he is averaging 22 points and shooting 47.7% from the field, plus 50% from long range.

Even if this boost in production is solely because of Derrick Rose’s long health and safety absence, Burks is still a valuable bench asset for the Knicks.

And yet, he remains out of the Sixth Man of the Year conversation.

But let’s be honest. Solid as he’s looked this season, Alec Burks is not the frontrunner for NBA Sixth Man of the Year. He isn’t even the NBA’s best sixth man, but it’s shocking he isn’t even in the conversation.

Thankfully, Rotowire lists awards odds across several sites, so we have a pretty decent look at the race with about six weeks left in the season.

The odds on favorite is Utah Jazz guard Jordan Clarkson, who’s averaging 17.1 points over 25.4 minutes per game. He’s shooting an average 35.4% from three and 42.2% from the floor, and also leads the league in free-throw percentage (FT%). However, Clarkson is exactly at the league average in WS/48 and is a worse defender than Burks. His VORP is 0.8.

Next, let’s talk about Toronto Raptors youngster Chris Boucher. He’s a big who stretches the floor, and is averaging 13.5 points and 6.3 boards on 52.8% shooting, plus 41.2% from three. He does very well in WS/48, with a .207 mark, but also has a 1.4 VORP to Burks’ 0.6. They’re not really comparable, but closer in the race than we think based on performance alone.

Even reigning Sixth Man of the Year Montrezl Harrell is in a similar boat to Boucher when compared to Burks. Yet, the difference is his .235 WS/48 ranks 7th in the league.

Now, let’s put the above players and the Sixth Man of the Year race in an even deeper context. We’ve now seen how Alec Burks is closer to them in terms of production than we realize, but how much do they really stand out?

Let me preface this by saying each and every one of these players is unbelievably talented and should be recognized accordingly. Clarkson has only started about 28% of games in his professional career, but still averages 15 points per game for his career.

However, this season, Clarkson is playing in a fast-paced and guard-centric offense in Utah, so he’s automatically set up to score in bunches off the bench.

Similarly, Boucher plays in a system that encourages bigs like himself and his teammate Pascal Siakam to stretch the floor. Harrell is just unbelievably talented.

Alec Burks, meanwhile, does it all in New York from scoring to rebounding to simply being a leader. Why, then, are his odds to be named Sixth Man of the Year at (+8000)?

Let me be clear. I am not a gambling expert, nor am I saying the oddsmakers are wrong. They’ve been in their line of work for a very, very long time. Given the current odds, it’s highly unlikely that Alec Burks will be NBA Sixth Man of the Year.

Except, at no point have I ever said he should win the award over any of Clarkson, Boucher, or Harrell. That’d be crazier than me saying Like Mike is a better basketball movie than He Got Game.

Rather, I’m saying Burks should simply be in the conversation for Sixth Man of the Year along with them. Peter Botte of The New York Post did a great writeup on Burks on Friday, and just what his teammates and coaches say about him are surprising.

“He just does it all,” says coach Tom Thibodeau. “There’s not any one particular thing. But he’s real good in a lot of different areas. He can run the team, he can play the point, play off the ball, put it on the floor, can shoot the three, can finish over size.”

“He’s stepping up big-time for us,” says RJ Barrett. “We need him and [I’m] very happy we have a guy like that on our team.”

Maybe it’s the NBA’s automatic west coast bias, or maybe it’s the Knicks spending most of the last 20 years in the lottery.

But one thing is clear. Anyone who’s watched New York at all this season sees Alec Burks’ value as the team’s sixth man/top bench option.

Can’t we at least make him a bigger part of the Sixth Man of the Year conversation?

Business Insider thinks the 2019 Knicks would beat the 1996 Bulls