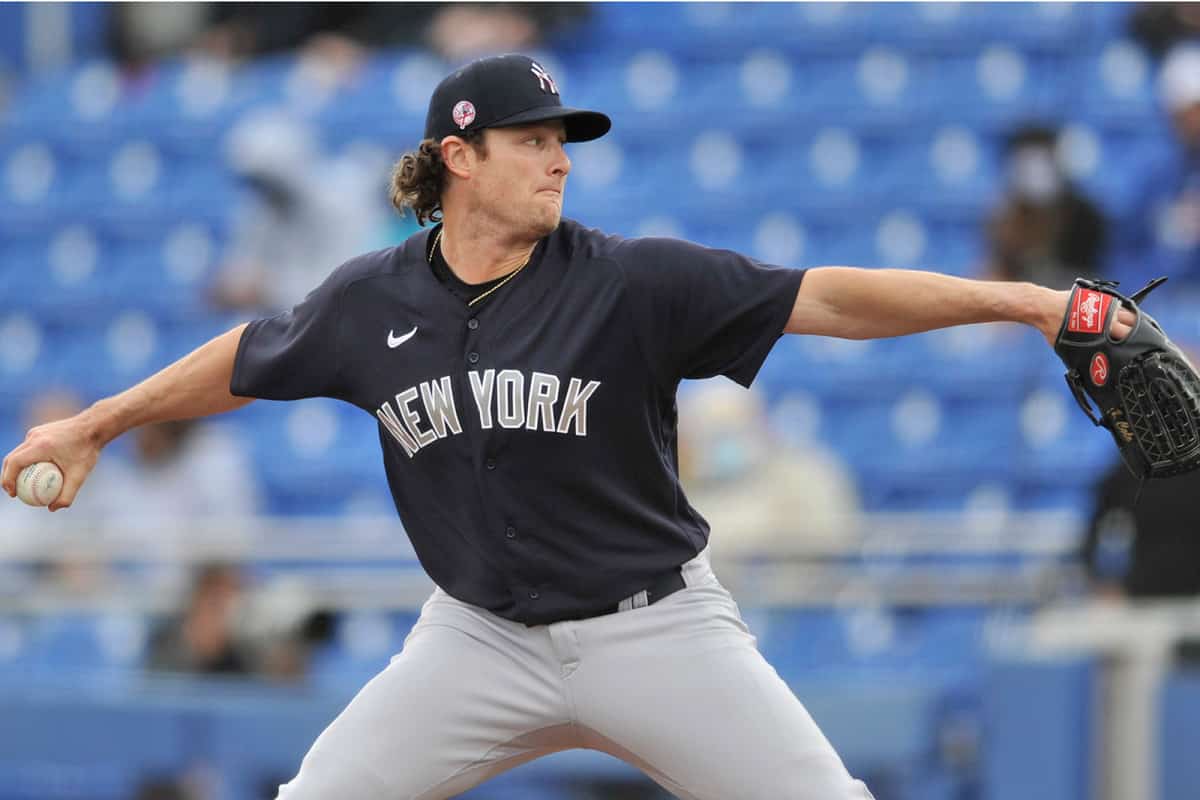 The New York Yankees are gambling on their starting rotation in 2021, and each pitcher faces a unique challenge this season.

The New York Yankees gave their pitching staff a complete makeover for the 2021 season.

It was a hard but necessary move. Popular Masahiro Tanaka wasn’t re-signed in free agency and went home to his native Japan. Neither J.A. Happ nor James Paxton was retained. Aside from Gerrit Cole, the rotation is a combination of youth and reclamation projects.

Yet, the Yankees’ pitching has stood out in spring training. The entire staff has posted a 3.29 ERA, second only to the Toronto Blue Jays. Opposing hitters are batting just .205 against New York’s stable of arms.

While it’s great that the staff has looked promising early, the regular season will prove more challenging. If each of the Yankees’ starters can rise to the challenge, 2021 could prove to be a great year in the Bronx.

You’ll recall that last week, The Falcon and the Winter Soldier premiered on Disney+. Picking up where Avengers: Endgame left off, Sam Wilson/Falcon politely declines to succeed Steve Rogers as Captain America. Though honored, he just can’t do it.

The leadership of the New York Yankees pitching staff is similar. For years, a number of great pitchers sat in that big chair, from Andy Pettitte to Mariano Rivera to CC Sabathia and, now, Gerrit Cole. The jovial Sabathia’s laid-back and familial nature left Cole with big shoes to fill, but he appears to be embracing his new role.

Though not a carbon copy of the big lefty, Cole is a strong leader in his own way. He takes his work very seriously and holds himself to a high standard, so why shouldn’t his teammates? I even said in an earlier article that the addition of Jameson Taillon was proof of Cole’s brand of leadership.

In essence, Cole really just needs to keep in constant communication with the rest of the staff. He’s their leader and, plain and simple, a leader leads.

Corey Kluber’s goal in 2021 is simply to look like an ace again. He won two Cy Young Awards with the Cleveland Indians, but missed most of the last two years with injuries. He signed a one-year deal with the New York Yankees after pitching a single inning for the Texas Rangers in 2020.

Fast forward to today, and Kluber has pitched to an even 3.00 ERA in two spring starts. His pitches look crisp and, most important of all, he’s healthy.

We all know that when Kluber is locked in, he goes into Klubot form, as sponsored by Omni Consumer Products. He just needs to stay healthy this year and be ready to adjust on the fly to compensate for his lack of velocity.

Jameson Taillon: Show them who you really are

Listen to Jameson Taillon in the above clip, and you’ll understand why he and Cole are such good friends. They came up together with the Pittsburgh Pirates, though Taillon spent more time on the injured list in the Steel City. He missed all of 2020 recovering from a second Tommy John surgery.

The New York Yankees were thus able to acquire Taillon for some low-level prospects in January. Now, they may finally get the arm who was talented enough to be drafted No. 2 overall in 2010. Taillon has pitched to a 1.08 ERA in spring training and already seems as though he’s been a Yankee for years.

Like Kluber, Taillon’s success is ultimately tied to health. But given how much he changed his workouts during his recovery, not to mention he’s now part of a competent franchise, he’s already set up for success.

Jordan Montgomery: Unleash it all

We all remember Jordan Montgomery as a fresh-faced rookie in 2017. The lanky lefty had a nasty curveball, but not much velocity on his fastball and was still mastering his changeup.

Cut to Tommy John surgery the following year and just two appearances in 2019, and we haven’t really seen much of the real Montgomery. He went 2-3 with a 5.11 ERA in 2020, but his 3.87 FIP showed his rising potential.

This year, Montgomery looks like a completely different pitcher in spring training. His fastball has touched 95 mph, he has good control of his curveball and changeup, and is working on adding a cutter too. This can be attributed to new head trainer Eric Cressey who, as Pete Caldera of Northjersey.com reported, worked extensively with Montgomery.

Throw in a full season with pitching coach Matt Blake, and Montgomery could be a true breakout candidate for the New York Yankees.

Domingo German: Shut up and pitch

Domingo German is probably going to be the New York Yankees’ fifth starter in 2021 and no one is happy about it. Even after he missed all of 2020 with a domestic violence suspension, further social media drama at the start of spring training did little to sway opinions.

And yet, German still hasn’t allowed a run in three spring training starts. Deivi Garcia has also looked sharp, but still needs to work on his control. More importantly, former ace Luis Severino will be back from Tommy John surgery in June or July.

This means, in the meantime, Domingo German has one job: shut up and pitch. We all know what happened and we’re done talking about it. In fact, some of us are quite sick of it. He wasn’t traded. He’s still here and a member of the team.

If he can stay in the papers because of his pitching and not his personal life, then German could maybe redeem himself in the eyes of some. Until then, however, he’s just a placeholder for Severino and/or Garcia.