As 2021 kicks off it’s time to start talking about what the New York Mets should do differently in the coming year.

2020 was a year to forget for the Mets. They saw their manager embroiled in a scandal that forced him to lose his job. COVID-19 caused a shortened season that didn’t allow the Mets to recover from a poor start. They also lost Noah Syndergaard and Marcus Stroman due to injury and COVID related reasons.

On the field, there was little to be happy with. Off the field was another story. Fans rejoiced at the Wilpon family selling the Mets to billionaire Steve Cohen.

With Cohen and Sandy Alderson in charge, the Mets have already started making some strong moves. James McCann is coming in to take over as the team’s everyday catcher. The Mets manager to hire both finalists for their open general manager job. Maybe most importantly, they haven’t made any reactionary moves that scream bad trade or contract.

However, the Mets still have a few things that they need to work on going into 2021. Some new year’s resolutions of sorts. 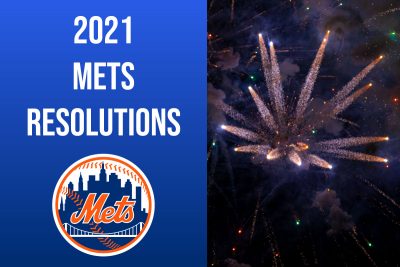 1. Make a bigger play in the international posting system

The last time the Mets signed an incoming Asian free agent was 2010 when they signed both Ryota Igarashi and Hisanori Takahashi.

Even then, the only major Asian free agent the Mets ever signed was Kazuo Matsui. The NPB star failed to reach those heights in MLB and it seemed to scare the Mets away from making major investments in Asian players since.

The Mets need to address this. This year a number of top Asian free agents are on the market, and it’s been good to see the Mets at least involved with two of them.

They didn’t sign Ha-Seong Kim, but he’s exactly the kind of player the Mets should have an interest in. The bigger prize might be star pitcher Tomoyuki Sugano.

The Mets have been connected to Sugano for a while and he’s expected to be a number two or three starters in the majors. That would be a massive addition.

If they don’t get Sugano they’ll have to turn to the other free agents in this class. It’s pretty thin after Trevor Bauer with the top options being Jake Odorizzi, Masahiro Tanaka, and James Paxton. All good pitchers with major flaws.

The Mets have been on the sidelines for too long. They’ve eliminated an entire set of players by not taking advantage of the Asian market. That has to change, and it should start in 2021.

2. Put a bigger focus on the defensive side of the ball

The Mets defense has been among the worst in MLB for what seems like forever. It was one of the first things that Sandy Alderson addressed as an area the Mets need to improve when he took over in October.

Despite that, he’s ignored his own advice. James McCann has been among the worst defensive catcher in MLB for the majority of his career. A 30 game stint behind the plate in 2020 shouldn’t put those worries to rest.

If the Mets are going to survive without an elite pitching staff they’re going to need a strong defense behind them. That starts with developing strong defensive players. The Mets have improved in that area in recent years with the likes of Andres Gimenez and drafting Pete Crow-Armstrong.

Even still, Brett Baty struggles defensively, Ronny Mauricio hasn’t found his defensive groove, Francisco Alvarez is a bat-first prospect, and Mark Vientos is almost certainly going to have to move off third base in the future.

Developing defense has been a struggle. The Mets need to change that. Adding some strong defensive players to the 2021 roster would be a great way to start a shift in organizational philosophy.

The Mets have had a chronic trading problem. Every time they saw a whole under Brodie Van Wagenen it seemed they’d rather make a trade than sign anyone. While the recent issues are the ones people will remember, it was just Van Wagenen who did it. This has been a systemic issue for the franchise.

Some of that stems from the Wilpons refusing to spend real money in free agency. However, that’s not the only issue. the Mets organizational philosophy for years has seemed to be, trade away prospects because they’re replaceable.

The only general manager who went against that was Sandy Alderson who managed to hold onto and see most of his first-round draft picks reach the majors.

The Mets should make that their ideal. As tempting as a major trade for Francisco Lindor or Nolan Arenado would be, holding onto elite prospects should be the goal.

Francisco Alvarez stands out as a perfect example. Alvarez is a strong prospect, among the top 70 in MLB, but his value to the Mets should be higher. The fact he plays catcher alone makes him worth his weight in gold because elite catchers are nearly impossible to find.

Last year at the deadline the Mets traded one of their top-10 prospects, Kevin Smith, for a middle relief pitcher. They didn’t have to make that deal. They could have just promoted Smith and seen how he would have handled bullpen duty.

Now they’re without one of their top pitching prospects and they have a relief pitcher who was a non-tender candidate this offseason.

Another example was trading for Jake Marisnick. The Mets sent reliever Blake Taylor to the Astros as part of the package. Taylor had a 2.18 ERA in 22 appearances for the Astros in 2020. He allowed just one run in eight appearances in the playoffs in 2020.

The Mets gave up a potentially elite young reliever for a fourth outfielder on a one year deal instead of signing someone.

The Mets need to be in the business of developing prospects moving forward. They can’t afford to keep hurting the future for the present.