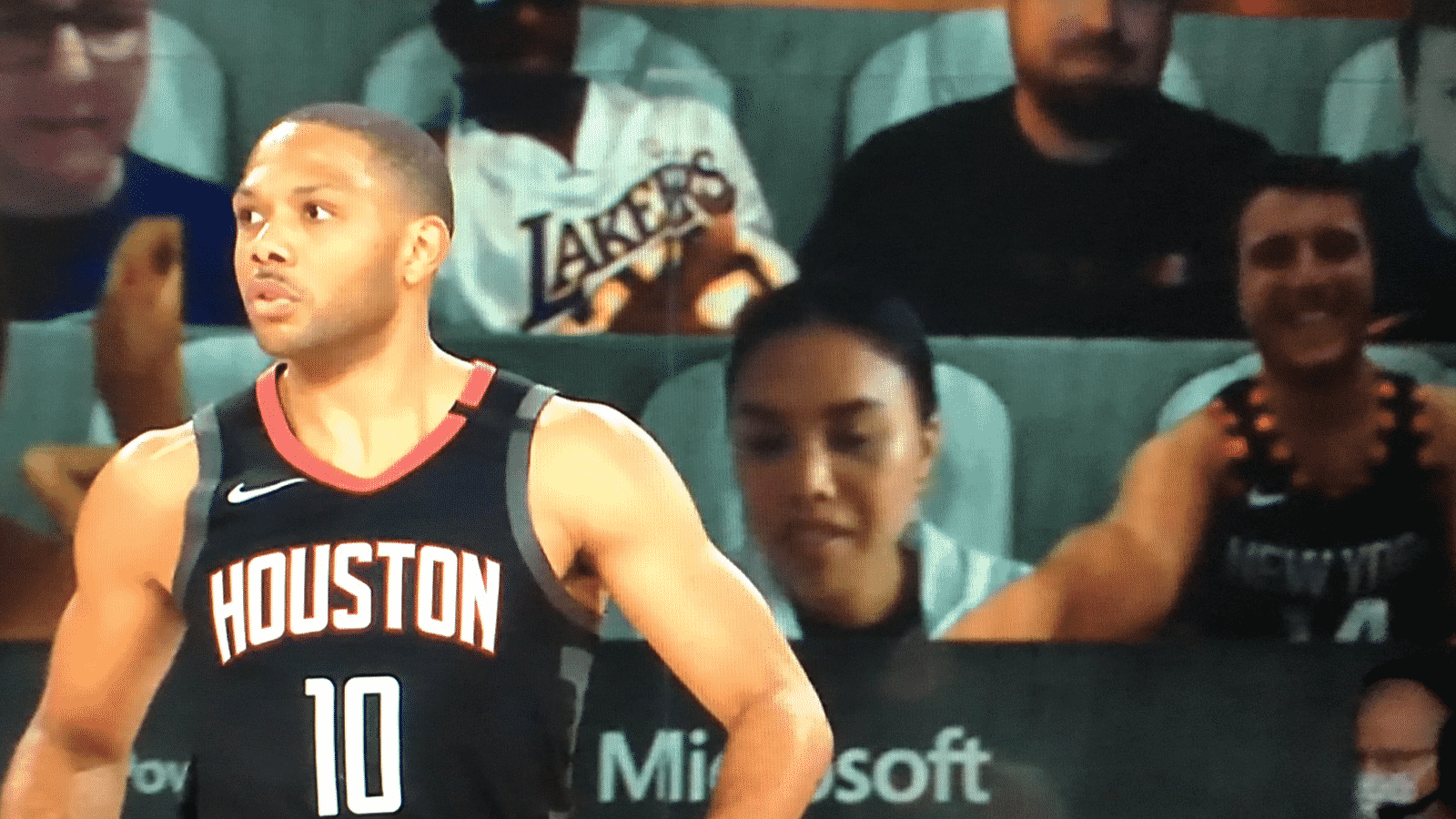 A New York Knicks jersey is the last thing anyone expected to see during this year’s NBA playoffs. Here’s how it happened.

So let’s set the stage. I’m watching Game 7 between the Houston Rockets and Oklahoma City Thunder and ESPN is cutting to a commercial break. And suddenly, there’s a New York Knicks city edition jersey front and center with a smiling Knicks fan.

Knicks and Lakers fans have infiltrated the virtual stands pic.twitter.com/TSV27Hjk2Z

I posted the picture to Twitter and that Knicks fan, James Wolf, happened to see it. So I spoke to James to try and figure out the story behind a Knicks fan infiltrating the NBA bubble, kind of.

This conversation has been lightly edited for clarity.

ESNY: Which teams “virtual fans” were you a part of and how did you get that opportunity?

James Wolf: I was a virtual fan for the Thunder-Rockets Game 7, but I was in the Pepsi section, which wasn’t aligned to one of those two specific teams. I got the opportunity through a friend who works with Mountain Dew (the best soda brand out there). He offered me the chance and I jumped at it, not thinking I’d get that much screen time.

ESNY: What was your overall impression of the “virtual fan” experience?

JW: The virtual fan experience was sick. It was 20 strangers in my section just talking about hoops and laughing at Scott Foster the entire time. We were all in a Microsoft Teams video chat with a live stream to the game. The only thing that I didn’t consider was that the ESPN app on my TV would be on delay compared to the live stream on the computer, so I couldn’t watch on TV or the timing of my reactions wouldn’t make sense. This ended up being a blessing in disguise though because I would see myself on the court on my laptop and then know exactly when I’d appear on the TV like a minute later.

ESNY: I’m judging by your Twitter feed that you’re a pretty die-hard Knicks fan. Was the original plan to try and get in the virtual stands and get your Knicks jersey on TV or was it more of a spur of the moment type thing?

JW: Totally spur of the moment. I didn’t know going in that I’d be in the first row or how it really worked, so I didn’t think too much about what to wear since I thought my screen time would be minimal. Once I realized I had prime seats, I immediately tossed on my Iso Zo jersey. Cutting him for Theo Pinson was pretty heartbreaking, as Zo has been my favorite Knick for two years. There is a romanticism from Knicks fans towards end-of-the-bench guys that I don’t think other teams have since they probably have more traditional things to root for, like being in playoff contention. For Knicks fans, having a 10th man who might go off for 16 points every eighth game is a significant experience, and I genuinely thought Zo was the only guy on our team who could get a good look whenever he wanted. My girlfriend actually got me a Cameo of Allonzo trier wishing us a happy anniversary two years ago, so I thought I’d return Zo the favor by reminding viewers on national TV who has the most underrated bag in the league.

ESNY: How do you feel about the direction the Knicks are going now with Leon Rose and Tom Thibodeau taking over?

JW: I love the Leon hire. Love the Kenny Payne hire. Love bringing in World Wide Wes. It was definitely time for the Knicks to try something different. I hate pinning our long-term success to attracting free agents, but you’d have to think if anyone is going to do it for us it will be the former head of CAA basketball, World Wide Wes, and a beloved Kentucky coach. I’m a little worried Thibs is gonna play RJ like 47 minutes per game, but we will see. Overall, I’m at this weird point of knicks optimism where I think our young guys are talented and I’m hopeful that our front office’s connections will attract some talent while recognizing that we probably don’t have a single player that would see the court for any team left in the bubble.

ESNY: What do you think the Knicks should do with the eighth pick in the draft?

JW: I think we gotta go with Killian Hayes if he is there. Having three young guards who all speak French would be amazing and go down in NBA history. It’s never been done.

ESNY: Is there anything else Knicks-related you want to get off your chest while you have the opportunity?

JW: My friends have a pretty well-developed theory that if Frank Ntilikina moved the release point on his jumper 1.5 inches to the left, he’d be a 40% shooter from 3. Would love your take on this.

ESNY: I’m always happy to write about Frank Ntilikina so I’m glad you asked. There might be some subtle adjustments he can make to his form to improve his three-point shot, but I don’t think his form is the issue necessarily. Ntilikina hit 51 of his 59 attempts at the free-throw line and while that’s not high volume, good free throws usually point to solid form.

Rather than moving his release point, he should move where he takes those three-pointers. Ntilikina shot 32.1% on all threes last season and the majority of his threes came from above the break, where he shot 28%.

On the flip side, he hit 14 of 29 (48.3%) corner threes he took last season. Again, this is low volume so take these numbers with a grain of salt, but it’s definitely a part of the floor worth exploring for Ntilikina.

As a team, the Knicks didn’t take many corner threes the last few seasons, but it’s one of the best shots in the NBA. That should change under Tom Thibodeau and if the Knicks draft or sign a point guard, we can expect to see Ntilikina playing off the ball a lot more in the future. If he’s not handling the ball as much, he’s a perfect candidate to become a corner-three specialist.