With New York Mets spring training 2.0 officially underway, Jared Hughes is a pitcher to keep an eye on throughout this month.

Following a four-month hiatus, Major League Baseball has finally returned in the form of a second spring training or summer camp as some teams prefer to call it.

While it’s great to see players back on the field, they’ll only have three weeks to prepare for the upcoming season. As a result, there’s a greater risk for a significant number of injuries during spring training 2.0.

With that in mind, teams have been looking to strengthen their squad ever since the roster freeze was lifted earlier this week. Looking to add depth to their roster, the New York Mets signed a handful of players on Tuesday including veteran Jared Hughes.

After signing a minor-league deal with the Astros this past offseason, Hughes was left off their 40-man roster and decided to opt-out of his contract once MLB announced its hiatus back in March.

While it’s unclear to how many offers the 34-year-old received, it appears the Mets were likely one of the few teams — or possibly the only one — that offered him a major-league contract. Nevertheless, the veteran hurler now has a chance to make an impact in Queens during the 2020 campaign.

With rosters expanding to 30 players for the first two weeks of the regular season, Hughes will likely be provided with an opportunity to break camp with the Mets. In order to accomplish that feat, he’ll need to drastically improve his results from last season.

Despite inducing a 59.2% GB rate, Hughes failed to keep the ball in the yard and struggled at times to limit hard contact as well. With that said, the 6-foot-7 hurler could still provide plenty of upside for the Mets this season.

Prior to the 2019 campaign, the former fourth-round pick enjoyed a ton of success on the mound. In particular, the Connecticut native recorded the best performance of his career in 2018. While he didn’t earn a trip to the 2018 All-Star Game, the righty was still considered as one of the best relievers in the league that season.

Unfortunately for Hughes, he wasn’t able to carry these impressive results into last season, ultimately leading to his departure from Cincinnati. Furthermore, the majority of his struggles were caused by his inability to locate his low-90s sinker effectively.

Further showcasing his sinker’s dominance, the veteran produced an 18.4% strikeout rate, 23.6% whiff rate, 37.7% chase whiff rate and a 70.1% GB rate with it during his inaugural season with the Reds.

Despite these concerning metrics, there’s a way for Hughes to bounce back with his sinker in 2020. Luckily, he’s likely just one small adjustment away from regaining his dominant form — but correcting his favorite pitch could take a lot of time and effort.

Taking it one step further, let’s take a look at where in the strike zone hitters slugged against Hughes’ sinker during the 2018 campaign: 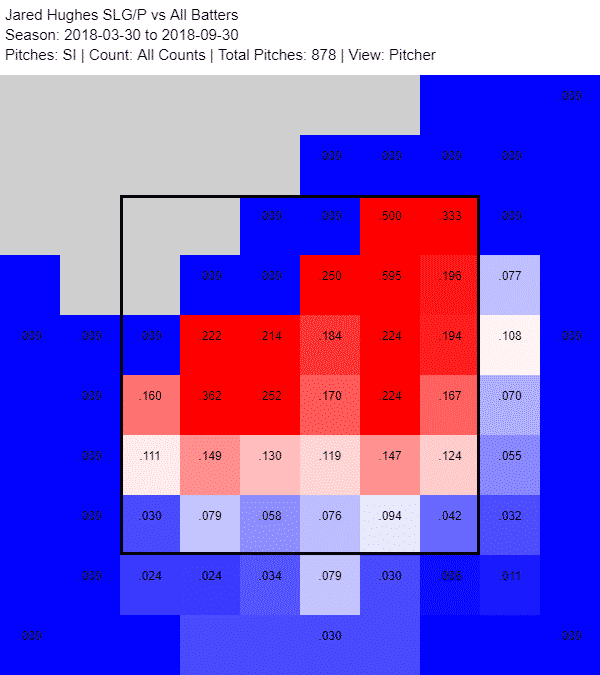 As seen in the chart above, when missing with his sinker, Hughes primarily kept it away from the middle of the plate. As a result, this prevented batters from doing a ton of damage against his primary pitch. 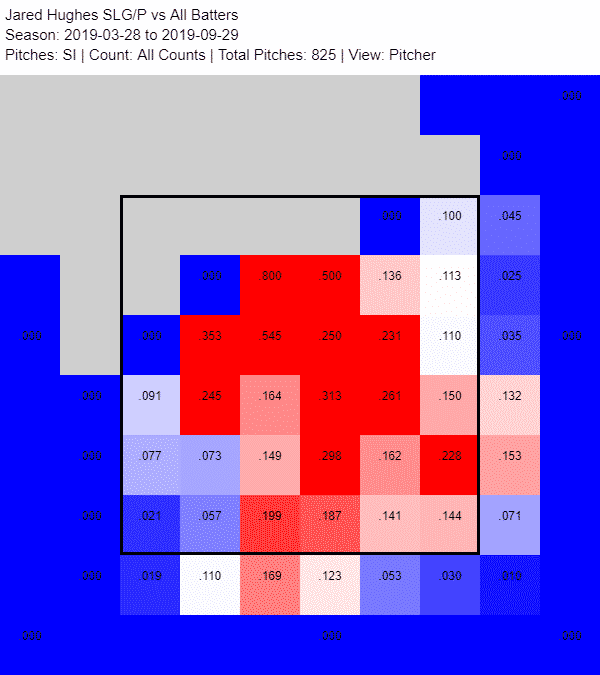 Unlike the 2018 campaign, Hughes failed to keep his sinker out of the heart of the plate last season, leading to his concerning home run totals. Located down the middle of the strike zone, it also didn’t fool as many hitters, making it less deceiving and harder to generate swings and misses.

Since the average movements on his sinking fastball haven’t altered over the last two seasons, it seems like Hughes battled with his release point at times in 2019. If the former Pirate can correct this issue during spring training 2.0, then he could become a valuable weapon within the Mets’ bullpen.

With New York looking for improved results from their relievers — aside from Seth Lugo — in 2020, having a reliable sinkerball pitcher could add another element to their group of talented arms. While it might be difficult to provide him with playing time during the later innings, he could serve as a seventh-inning specialist.

Despite entering his age-35 season, Hughes could prove a lot of experts wrong and be a steal for the Mets this season. With that said, his success will be determined by his ability to consistently command his sinker throughout his 10th season in the majors.