After taking over as the New York Mets closer last season, Seth Lugo will be looking to continue his dominating performance in 2020.

Over the last two seasons, Seth Lugo has been one of the most valuable relievers within the New York Mets bullpen, and he’ll likely continue that trend this season.

With that said, Lugo still desires to be in the rotation and would jump at the chance to start games in 2020.

Before the 2018 campaign, the right-handed hurler was poised to become a back-of-the-rotation pitcher in the majors. But from the bullpen, he’s been able to dominate, proving that he’s better suited for a late-inning role.

After Lugo’s breakout performance in 2018, he was able to take his game to the next level this past season. As a result, he recorded career-bests in FIP, xFIP, WHIP, OPP AVG, strikeouts, and WAR.

For Lugo, refining his sinker played a big factor in his ability to take that next step as a reliever in 2019. As a result, the 6-foot-4 hurler now features three elite pitches and can command each one with perfection.

Prior to the 2019 campaign, the former 34th-round selection was only dominant with his mid-90s fastball and high-70s curveball. Luckily, he was just one adjustment away from unlocking his full potential with his low-90s sinker.

As shown below, the Mets reliever mainly located his sinker within the upper half of the strike zone last season. 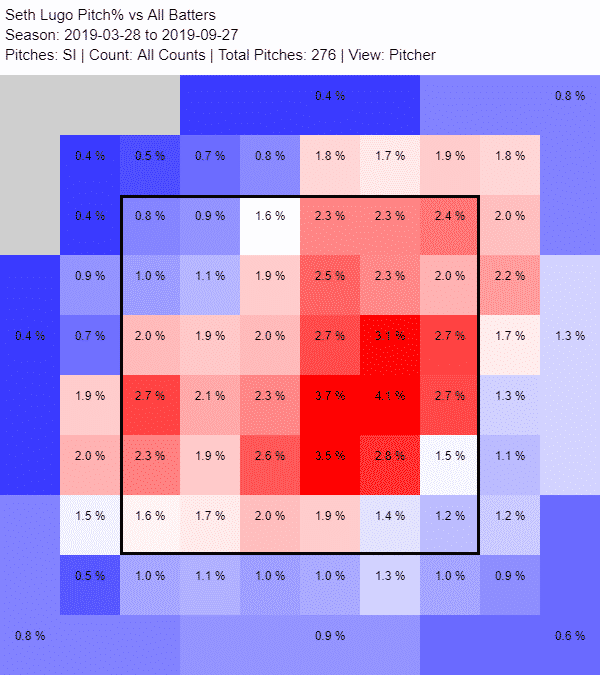 As seen below, Lugo located his sinker slightly lower in the strike zone, primarily throwing it below the belt and above the knee to hitters during the 2018 campaign. 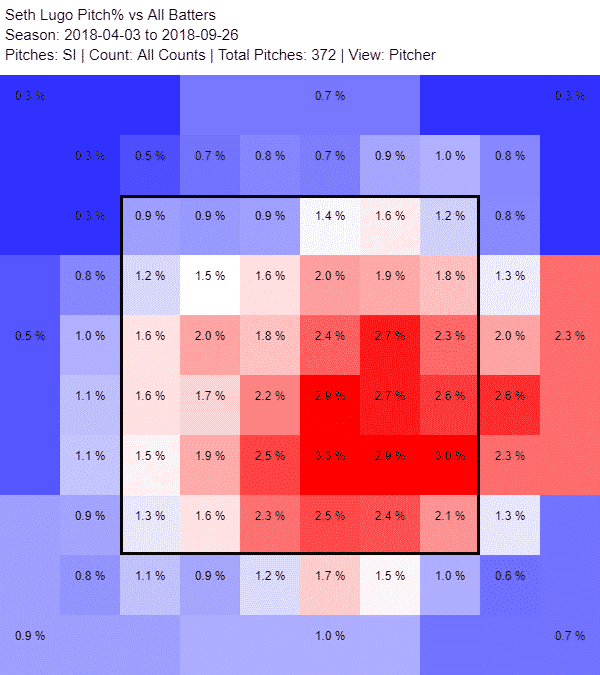 Following these changes, Lugo was able to induce more strikeouts, ground balls, and soft contact with his sinker in 2019. In addition, he was able to generate fewer walks, fly balls, and a lower average exit velocity against it.

Locating a sinker in the upper half of the strike zone may seem foolish. But, increasing its velocity and reducing its vertical movements allowed Lugo to disguise it with his heater. This made his sinking fastball appear like his four-seamer, which kept hitters off balance last season.

Lugo’s fastball was located in the upper half of the strike zone and averaged 94.5 miles per hour in 2019. Therefore, most hitters couldn’t decipher the difference between his sinker and four-seamer until it was too late.

Here’s an example of Lugo’s mid-90s sinker from last season:

If you’re having trouble observing the differences between these two videos, you’re probably not the only one experiencing this issue. At a distance glance, Lugo’s fastball and sinker looked very similar in 2019.

Starting with Lugo’s delivery, it’s virtually impossible to spot any differences between the two pitches until they reach closer to the plate. At that point, his sinker begins cutting towards the right side of home plate. His fastball, on the other hand, continues forward with very little horizontal movement.

Luckily for the hard-throwing righty, his sinker starts separating from its trajectory just before it reaches the plate. As a result, this creates an illusion that he’s throwing his four-seamer instead of his sinking fastball, preventing hitters from becoming comfortable in the batter’s box.

Along with his sinker, fastball, and curveball, Lugo also features a high-80s slider and changeup. He’d likely need to utilize each of them more frequently as a starter. Nonetheless, they don’t possess any elite potential and should remain occasional pitches in 2020.

When and if baseball resumes, it’ll be crucial for the Mets relievers to improve from 2019. New York’s bullpen produced the fifth-worst ERA (4.99) and the seventh-lowest fWAR rating (0.7) in the majors last year.

With the addition of Dellin Betances along with the progress that Edwin Diaz made during this past offseason, the Mets bullpen seems to be on track for an improved campaign. If Lugo remains New York’s closer, the team shouldn’t have any issues finishing games this season.

Note: All stats from FanGraphs and Baseball Savant.