Following his first New York Mets season, Marcus Stroman is confident that his dominance will return through ground balls.

Heading into this season, the New York Mets are expected to field one of the best starting pitching rotations throughout the MLB.

While Jacob deGrom and Noah Syndergaard will receive the majority of the attention from fans and the media, Marcus Stroman is also likely to attract the spotlight at some point during the 2020 season.

During his press conference on Thursday, the 28-year-old expressed his confidence and desire to regain his dominance on the mound starting this spring.

Marcus Stroman has no lack of confidence. From his press conference:

“I think I’m the best on the field whenever I’m out there, always.”

“I think I have the best core in the league.”

"I also have the best sinker in the league."

“I’m not scared of any moment. I fear nobody."

For Stroman, this certainly isn’t the first time that he’s made a bold statement to members of the media. Throughout his six seasons in the major leagues, the right-hander has provided news outlets with several headline-worthy quotes during his time with the Blue Jays and now with the Mets as well.

This is also the second straight year where Stroman has expressed his confidence regarding the upcoming season through his first press conference of the spring.

Last spring, the 5-foot-7 hurler displayed exactly how driven and competitive he is about dominating opposing hitters when he takes the mound every fifth day.

In speaking to reporters when pitchers and catchers first reported to camp, Stroman referenced his injury-riddled 2018 campaign and how confident he was about bouncing back in 2019.

Based on his eleven starts with the Mets last season, it’s safe to say that Stroman definitely didn’t perform up to expectations after he was acquired from the Blue Jays before the trade deadline.

While these results weren’t terrible, they definitely weren’t what the Mets expected to receive after they sent pitchers Anthony Kay and Simeon Woods Richardson to the Blue Jays last summer.

In order for Stroman to dominate this season, he’ll need to increase the number of ground balls he induces throughout his 2020 campaign. Since he thrives off his GB rate, an increased amount will be the key to a successful performance from the New York native.

Prior to last season, Stroman was the most effective pitcher at creating ground balls since the 2015 season. During those four seasons (2015-2018), the All-Star pitcher led the majors with his 61.4% GB rate.

Over his 184.1 innings in 2019, “Stro-show” produced just a 53.7% GB rate, which ranked fourth-highest among all pitchers with at least 150 innings pitched. As the number of ground balls that were induced lowered, his FB rate increased by 6.1% during last season.

One of the biggest factors that caused Stroman’s reduced GB rate in 2019 was because of his ineffective cutter. While the Mets’ starter has historically generated the majority of his ground balls with his sinker, his low-90s cutter has also produced a significant amount throughout his career as well. 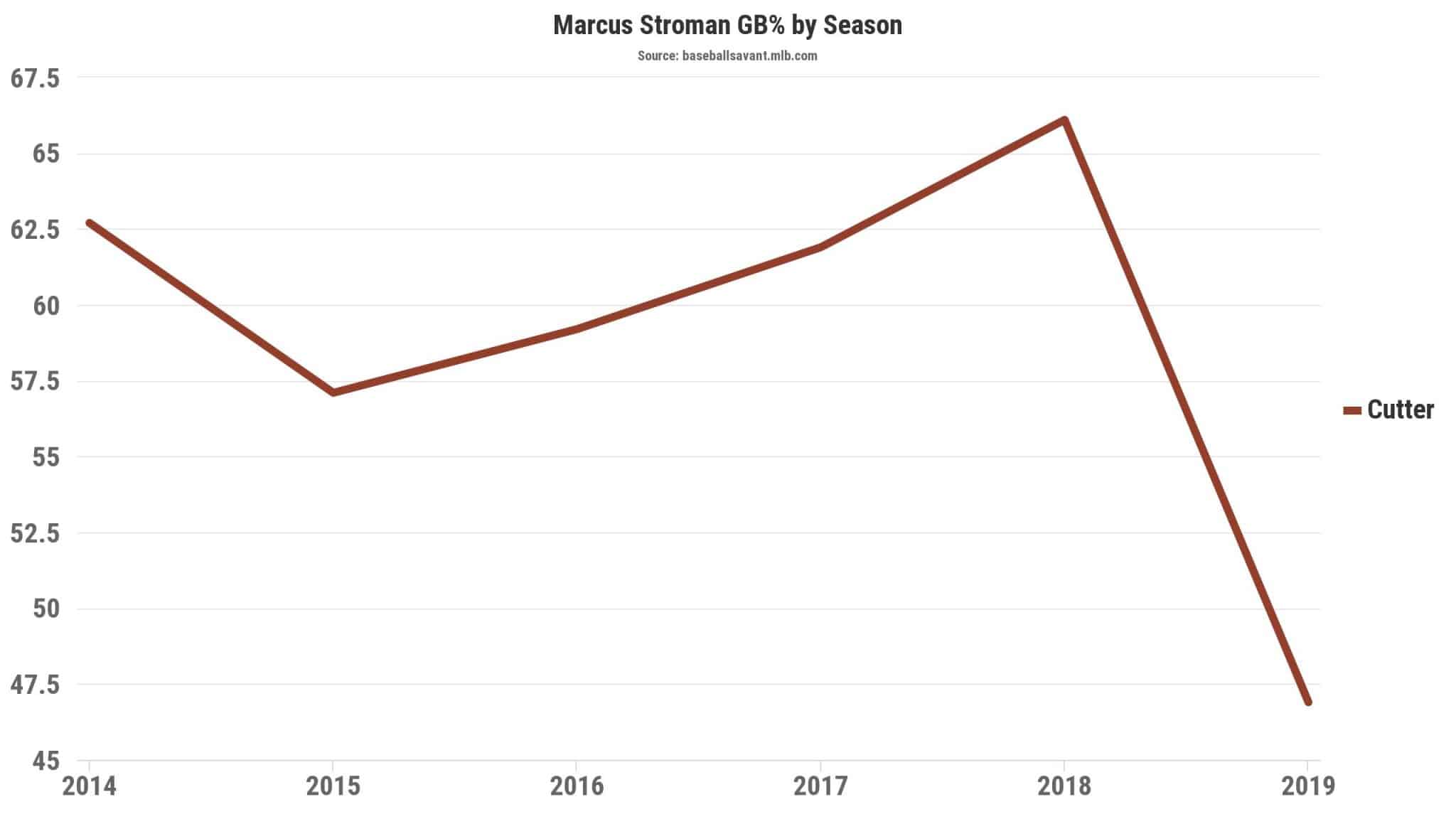 As seen above, Stroman suffered a severe decline in production with his cutter during his 2019 campaign. So, he’ll need to find a way to prevent this from occurring for the second straight season.

Based on these metrics, Stroman won’t play up to his expectations in 2020 if he can’t correct his cutter. Whether he needs to adjust the grip of his pitch or if he requires a slight change involving his delivery, these poor results can’t continue through this season.

If successful in regaining the dominance of his cutter, Stroman should witness a much higher GB rate, a significantly lower hard-hit rate and a much lower average launch angle against his cutter in 2020. In addition, he should also see his BA (.296), xBA (.264), SLG (.475), xSLG (.437) and wOBA (.346) against his cutting fastball lower during this season.

Since Stroman is slated to enter free agency after the 2020 campaign, it’ll be vital for him to record the best performance of his career this summer.

Given that he’ll be entering his age-30 season in 2021, opposing teams would already be less willing to offer the ground-ball pitcher a lucrative contract next winter. So, he’ll need to display that he’s still capable of pitching at a high level this season, rather than just expressing it through his comments to the media.

If his GB rate increases back to normal in 2020, then Stroman should have no issues earning a WAR rating of 4.0 or higher. As a result, he should receive a flurry of multi-year contract offers next offseason. In fact, there’s a chance that Stro-show could earn the largest contract among all the pitchers who’ll be available on the free-agent market next winter.

Although, just as he mentioned on Thursday, Stroman is more focused on dominating with the Mets and reaching the postseason during his first full season in Queens.