In Major League Baseball’s field of dreams, an ‘apex predator’ manager has emerged. His name is Carlos Ivan Beltrán. He brings a five-tool resume, on and off the baseball diamond, to deliver the New York Mets to the promised land.

He is a complicated man with a simple goal: win a World Series Championship. For Carlos, this is unfinished business.

In nature, apex or alpha predators are at the top of the food chain. They have no known predators. Some examples include tigers, sharks, and even polar bears (the real kind, not Peter Alonso, although that can be debated). Beltran is a new breed of baseball manager.

General manager Brodie Van Wagenen’s selection of Carlos was both risky and inspired. It was an example of lateral thinking: the method of creatively solving problems by viewing them from a new perspective. Beltran wasn’t the easy choice. Joe Girardi filled that box. Beltran was the right choice.

Beltran is part of an elite fraternity of gifted five-tool-athletes possessing the following skills: speed, power, hitting for average, fielding and arm strength. You may be wondering how this translates into his new managerial role. We’ll get to that after we review his career highlights.

Beltran’s compelling career spanned twenty years. He was selected as American League Rookie of the Year in 1999 and became a nine-time All-Star, three-time Gold Glove Award winner, and a two-time Silver Slugger. He hit 435 home runs, plated 1587 RBI, stole 312 bases, and had a 279-batting average. He won a World Series ring with the Houston Astros in 2017—his last year as an active player.

Adversity causes some athletes to break while others break records. Beltran broke records.

This native son of Puerto Rico was drafted out of high school by the Kansas City Royals in the second round of the 1995 amateur draft. He left home at the age of 18 to join the Gulf Coast Royals. He spoke Spanish on a predominately English-speaking team. He couldn’t even understand instructions from his manager. He could have failed.

Instead, he dedicated himself to mastering a second language in order to survive. He succeeded. He also faced another decision that would define him not only as a ballplayer but as a leader. 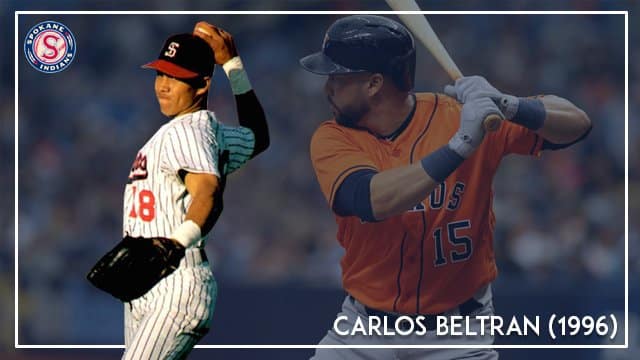 During his first year in the minors, Carlos—a natural righty—was encouraged by Yankees outfielder Bernie Williams and hitting coach Kevin Long to become a switch hitter. In the offseason, at the age of 19, he taught himself to bat lefty.

Now it’s one thing to do this in the playground while playing Wiffle Ball. But in the minor leagues? He did this in the heat of competitive games, where only a select few prospects ever make it to the majors. Not only did he turn himself into a switch hitter, but he became one of the best in baseball history.

Upon retirement in 2017, he hit 311 of his home runs—an amazing 71%—batting left-handed! He ranked as the fourth most successful switch hitter in baseball history with 435 home runs—trailing only Mickey Mantle (536), Eddie Murray (504), and Chipper Jones (468).

Beltrán not only mastered English and the skill of switch-hitting, but he also mastered himself. He turned adversity into opportunity under the searing lights of a baseball stage that would be witnessed by millions of fans. His perseverance and passion to be the best baseball player in the sport set an example for the players he will manage on the 2020 New York Mets.

Carlos Beltran’s selection to manage a major league team was inevitable. Being selected as the twenty-second manager in Mets team history perfectly fits the definition of Karama. It was meant to be.

Carlos wants to take care of some unfinished business with the Mets. He needs to claim the one thing that eluded him during his seven-year stint with the team: A World Series Championship ring. I wouldn’t bet against him.