The New York Mets bullpen was, without a doubt, a low point of the organization last season, one in which they missed the playoffs for the third straight year. The ballclub’s relievers finished 25th in the majors with a combined 4.95 ERA. It was a disappointing sight to see, as their starting rotation was essentially the opposite (seventh with a combined 3.84 ERA).

New York’s front office thus realized this and made an effort to bolster the pen this offseason. As a result, they acquired four-time All-Star and former New York Yankees reliever Dellin Betances on a one-year, $10.5 million deal. The veteran, when healthy, will immensely assist in the bullpen’s development.

On Thursday, during his introduction to the media, Betances noted how comfortable he already feels in his initial days with the organization.

“I’m definitely excited, I feel like I’m already at home,” he said. “I know a bunch of the players so I think the transition will be easy for me. I’m just excited to expand my career here in New York with the Mets.”

Last season, Betances experienced an injury-plagued campaign with the Yankees. The veteran dealt with shoulder issues, including a bone spur that kept him off the field until September. In his season debut on Sept. 15, he suffered a torn Achilles tendon, a setback that concluded his 2019 campaign altogether. 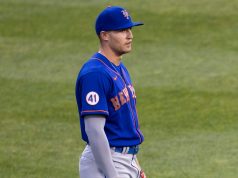 Jose Quintana gets 2-year deal with Mets, who keep filling out rotation

Another Mets-Dodgers bidding war could be brewing for Shohei Ohtani

Who will be biggest threat to Mets’ chances of re-signing Brandon Nimmo?