The crown jewel of the New York definitely has a bright future, but Pete Alonso will likely suffer a slight regression in 2020 if he’s unable to make a few key adjustments.

First baseman Pete Alonso took Queens by storm this season with his breakout campaign. The 24-year-old broke the rookie home run record with his NL-leading 53 home runs this season. Alonso also finished the 2019 season with the 3rd-most amount of RBI’s in the NL as well.

However, the New York Mets‘ slugger did finish in the top-three in the entire league for the most number of strikeouts. With 183 strikeouts this season, Alonso finished third in the majors for the highest amount of punchouts in 2019.

Regardless of the number of home runs hit during a season, it’s always concerning to see one of your best players as one of the league leaders in strikeouts.

Heading into next season, Alonso will need to do a much better job at staying disciplined at the plate. Through his 161 games this season, Alonso produced an average 10.4% walk rate and a troubling 26.4% strikeout rate. Despite his impressive .323 ISO and 143 wRC+, the high rate of strikeouts caused Alonso to struggle mightily with putting the ball in play throughout the season. As a result, the Mets’ All-Star recorded an awful .280 BABIP this season.

Alonso’s issues with breaking balls and offspeed pitches this season caused the soon-to-be NL Rookie of the Year winner to generate such a large number of strikeouts. Opposing pitchers threw sliders and curveballs to Alonso at a rate of 30.9% in 2019, and the rookie recorded a 34.2% strikeout rate and a 37.4% whiff rate against them. Alonso also created an awful .203 AVG, .211 xAVG, .418 SLG and a .442 xSLG with breaking balls this season.

So, those same pitchers who were scared to throw anything but a fastball to Alonso this past season will likely feel much more comfortable throwing more soft pitches to the Mets’ slugger next season.

Based on his numbers against heaters this season, pitchers will make it a priority to limit the number of fastballs Alonso faces in 2020, and who could blame them. During this season, Alonso hit 34 of his 53 home runs off of fastballs. The new face of the Mets’ franchise also produced a .295 AVG, .282 xAVG, .671 SLG and a  .577 xSLG against heaters as well.

Since Alonso recorded such a large amount of strikeouts and swings and misses against breaking balls and offspeed pitches, opposing pitchers will very likely begin throwing significantly more of those pitches outside of the strike zone next season.

Like with most power hitters, Alonso crushes any sort of pitch that is located in the middle of the zone. So, when it comes to breaking balls and offspeed pitches, pitchers are forced to attack the inner and outer quadrants of the plate against Alonso. 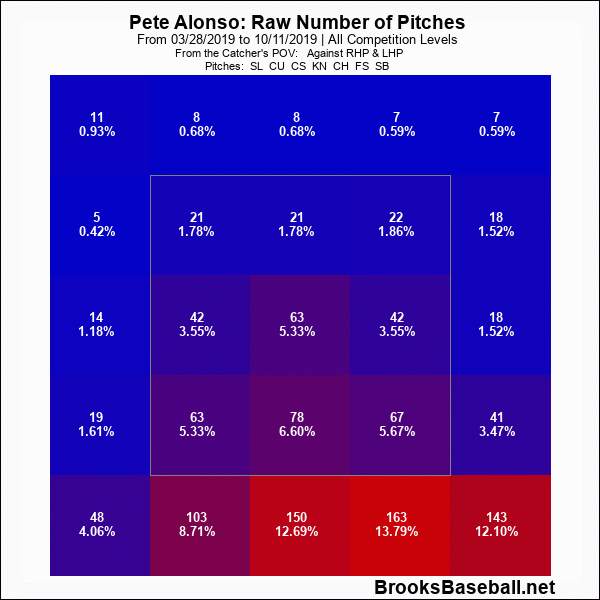 As seen above, it’s obvious that pitchers didn’t accomplish attacking those zones enough with their breaking balls and offspeed pitches this season. While teams did an excellent job of forcing Alonso to chase off the plate for those pitches, they failed to keep a large portion of their soft pitches out of the middle of the zone.

Alonso struggled to create any hard-hit contact with the breaking balls and offspeed pitches that were thrown down and away from him. With the way Alonso failed to lay off those pitches, it leads to believe that second-round draft pick from 2016 will witness an increased number of those pitches located in that quadrant next season. 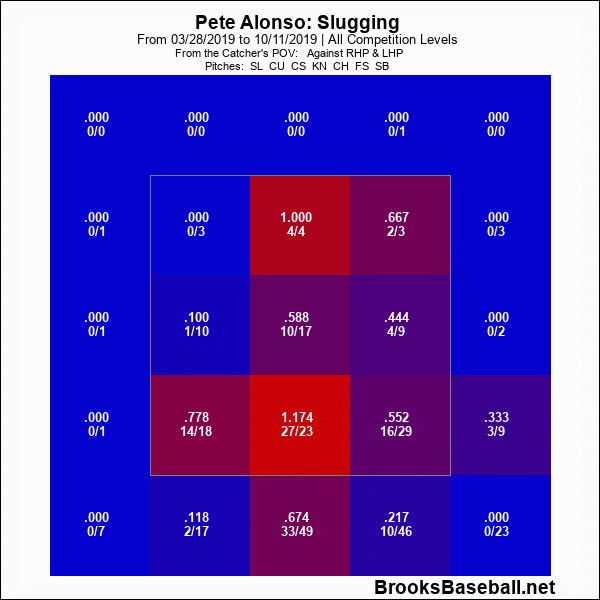 Alonso will see a drastic change in his pitch usage from teams if he’s unable to become a more patient hitter. Not only will he see fewer fastballs, but Alonso will also be thrown fewer and fewer pitches in the zone as well. In correlation to that, Alonso could very likely see a major drop in his home run and RBI totals next season.

If Alonso can lower his strikeout and whiff rates to somewhere around 25% against both breaking balls and offspeed pitches, then he shouldn’t sustain any significant power droughts in 2020.

For the Mets, their offense will rely on Alonso’s capability to recreate his production from this past season into next year. If Alonso fails to contribute similar to his 2019 performance, then the Mets will likely struggle to produce many runs in each game through the 2020 season.