The New York Mets needed someone to step up and perform in the leadoff spot, and Amed Rosario is doing just that.

After Jeff McNeil went down with a hamstring injury, the New York Mets needed a player to emerge and take over the leadoff spot in their lineup. Shortstop Amed Rosario has excelled as the leadoff hitter during the three games since McNeil was placed on the IL.

Even though Rosario’s time as the leadoff hitter won’t last long, he has also shown to be capable of remaining as a productive hitter at the top of the lineup until McNeil returns. That productivity all begins with his offensive outburst since the All-Star break.

In 31 games since the break, Rosario has hit eight doubles, three triples, three home runs, eight RBI’s and has slashed a line of .367/.396/.547/.942. Rosario has also recorded a .419 BABIP and a 148 wRC+ since the break as well. The Mets shortstop has also continued this outburst into his new role as the leadoff hitter.

Rosario has hit an insane eleven-for-16 along with a pair of doubles, a triple and two RBI. The 23-year-old has also struck out just twice over his last three games as well. Limiting the number of strikeouts is something the Mets will need him to continue to do as their leadoff hitter.

This season, Rosario has recorded a 71.9% Z-Swing rate and a 36.8% O-Swing rate. Which shows that this impressive plate discipline from Rosario over his last three games should be sustainable during the remainder of his time as the leadoff hitter. What’s been even more impressive about this recent stretch for Rosario is his increased hard-hit rate.

Rosario’s chances of sustaining this production through the rest of the season will also increase if he’s able to start hitting the ball to the opposite field. So far this season, Rosario has produced just 24.9% of his hits to right field.

That number has also decreased even further since Rosario became the leadoff hitter as well. Rosario has sent just 21.4% of his hits the other way over his last three games. Which is exactly why opposing pitchers have been pitching him on the outer half of the plate during that time. 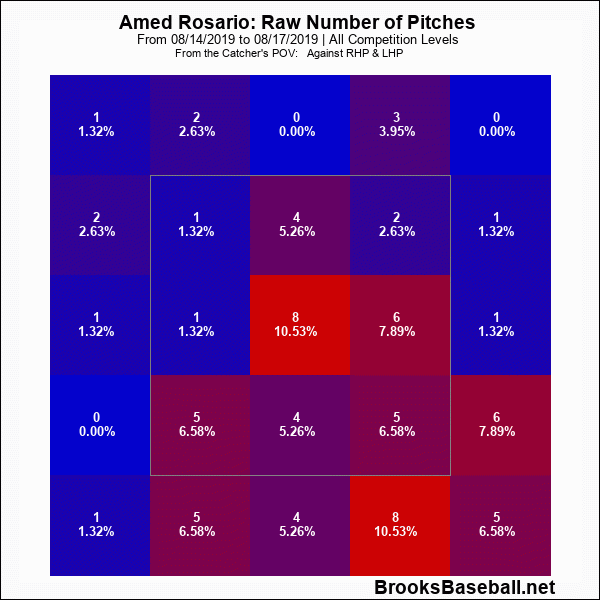 Opposing pitchers will likely soon begin to make adjustments against Rosario, which will include pitching him high and inside and away off the plate. So, Rosario will need to start producing hits to the opposite field to fully guarantee his chances of sustaining this recent production.

The Mets are relying on Rosario to maintain this production not only until McNeil returns. But also through the rest of the season as well. Having Rosario breakout offensively during the second half of the season has made the Mets lineup so much more dangerous against opposing teams.

His recent performance will also likely keep his bat in the top half of the lineup even when McNeil returns from the IL. The Mets could certainly use another reliable batter to get on base in front of the slugging Pete Alonso.

So, the emergence of Amed Rosario’s offense should help keep the Mets in the playoff race while Jeff McNeil is away. His continued production should also help the Mets make a playoff push during the final quarter of the season as well.