New York Mets’ J.D. Davis has been effective in small stretches this season, but he’s been outstanding ever since receiving regular playing time.

The New York Mets have to be impressed with the way J.D. Davis has been performing recently. The 26-year-old has been receiving regular playing time ever since Dominic Smith went down with an injured foot back on July 27.

However, how sustainable is Davis’ recent performance? can it last through the rest of the season? and into next season as well?

Davis has yet to play a full season in the major leagues during his career. So, it’s hard to expect him to produce like he’s been doing over an entire season. But, Davis’s numbers during his previous seasons in the minor-leagues suggest that his current numbers shouldn’t significantly decline over a full season.

From 2015 to 2017, Davis recorded 20+ home runs in three straight seasons. But, Davis also carried a strikeout rate of 24% or higher over those three seasons as well. However, Davis recorded his best performance of his minor-league career during his 85 games at triple-A last season.

Since Davis has been in the lineup regularly, he’s been getting on base even more efficiently than he was during last season at triple-A. Over his last 14 games, Davis has produced a 13.2% walk rate, a 20.8% strikeout rate and a 0.64 BB/K ratio.

These numbers show that Davis is most-successful at the plate when he’s able to remain disciplined, which Davis has shown to capable of doing over his last two seasons when he’s receiving regular playing time. Along with Davis’s ability to create walks, his hard-hit rate is another reason why he’s been so successful at getting on base.

Davis has recorded a 55.9% hard-hit rate over his last 14 games. Which has allowed him to be successful even with a groundball rate of 41.2% over that same time. Over his career, Davis has consistently produced a much higher groundball rate compared to his fly-ball rate. This means Davis will need to continue producing a high hard-hit rate during his career, in order for him to sustain this productivity. 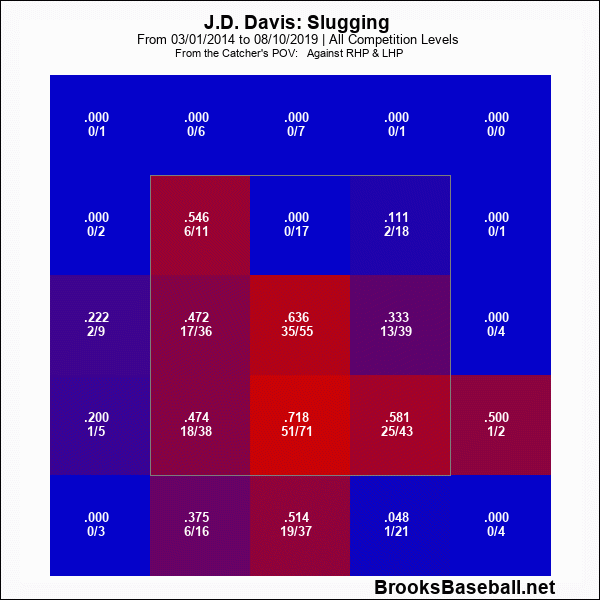 Here are the areas where Davis has been productive over his last 14 games: 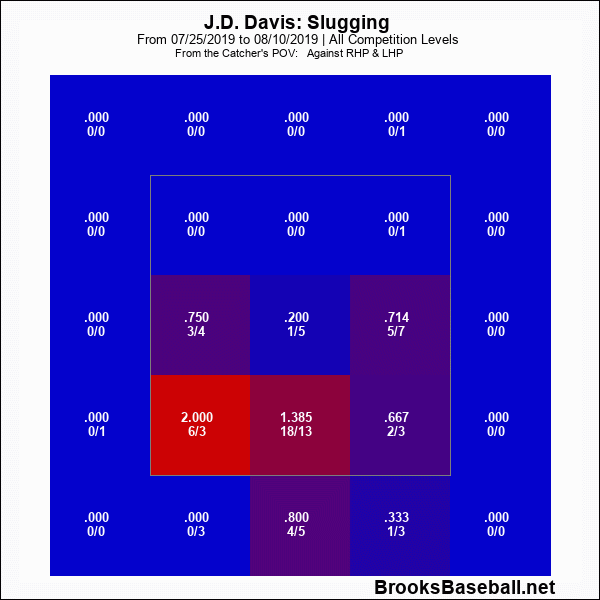 A big reason for Davis’s power surge has been the location of the pitches he’s receiving. Opposing teams have been throwing to Davis in the lower half of the strike zone. Which is exactly where he does his damage.

Here’s how Davis has been pitched over that stretch: 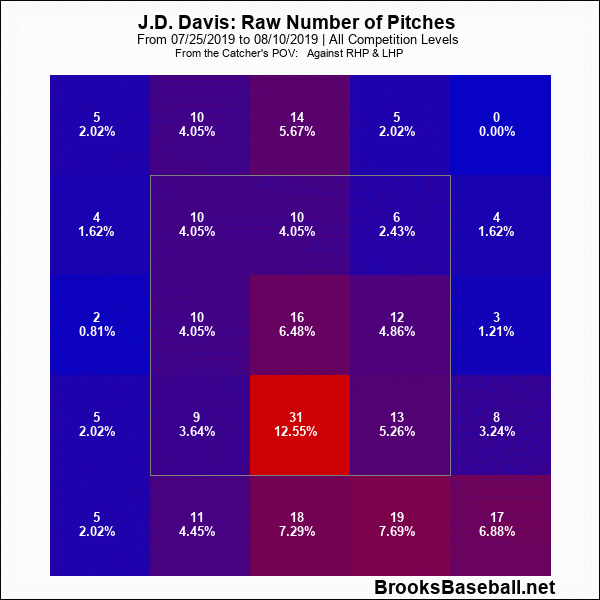 Davis has certainly been capitalizing on those pitches at the bottom of the strike zone, and even below it as well. However, Davis hasn’t been successful with any of the pitches in the upper half of the zone over his last 14 games.

So, this likely means Davis will soon be pitched very differently than he has been as of recently. But, that doesn’t mean Davis will see his numbers collapse completely. Davis’ plate discipline will still make him a productive hitter in his career, even if he endures power droughts at times.

Although, Davis has shown consistency in producing a lot of hard-hit balls in his career. So, even if Davis goes on stretches where he’s unable to hit the ball out of the yard. Davis will always be capable of making a quick turn around because of his consistent hard-hit rate during a full season.

Davis’s production this season will also likely force the Mets to find an everyday position for him heading into next season as well. With Todd Frazier‘s contract set to expire this offseason, that creates an opening at third-base for Davis.

Becoming the everyday third basemen next season would allow Davis to continue to receive regular playing time, which will give him the best opportunity to sustain his current performance going forward.

Playing regularly during a full season means Davis should easily be able to consistently produce 20+ home runs each season in his career and also be able to be among the team leaders in OBP, SLG and OPS as well.

Brawl breaks out during Mets-Braves, fan gets obliterated (VIDEO)