The New York Mets have chosen a unique option for the replacement of injured Noah Syndergaard on Thursday.

After right-hander Noah Syndergaard suffered a low-grade hamstring strain this past weekend, the New York Mets had a decision to make. Syndergaard, who was placed on the 10-day injured list, was scheduled to start in the first of a four-game series against the Cubs in Chicago on Thursday. Who were the Mets going to use as his replacement? Were they going to have reliever Wilmer Font start in his place?

Turns out, New York went with a unique option with this one. A decision that some fans didn’t see coming. Per Mike Puma of the New York Post, Mets manager Mickey Callaway has decided to call up Walker Lockett from Triple-A Syracuse. Callaway’s reasoning for choosing this route and not starting Font is simple.

“We wanted to keep Font available [in relief],” Callaway said on Wednesday before falling to the Braves 7-2. “[Lockett] can come up and throw 100 pitches; Font would have been limited to maybe 60, so if [Lockett] can get rolling, he can pitch deeper into the game, and if not, Font can come in and help him out.”

Lockett, a right-handed pitcher, pitched in four games for the Padres last season, unimpressively posting an ERA of 9.60.

Callaway is confident in Lockett as the Syndergaard replacement. He was brought into the organization to add depth to the starting rotation.

“He has been throwing the ball over the plate and he’s healthy now,” Callaway said. “He’s the guy we brought into the organization this offseason to be that sixth starter, that depth starter that we knew we would need at some point. And [Thursday] is going to be his opportunity to show us what he can do.”

The Mets continue their road trip as they take on the Cubs at Wrigley Field Thursday night at 8:05 p.m. EST. 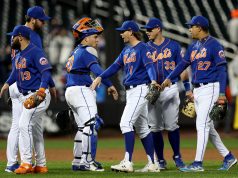 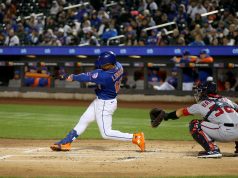