Forget bitter-rival Mr. Met. He’s small potatoes at this point. Don’t sweat the injuries that have forced the man the kids call Thor to start just 32 games over the last two seasons. That’s a worry for the future.

Right now, the New York Mets B-ace is engaged in all-out war against the narrative.

Syndergaard, 26, recently updated his Twitter bio to hilariously combat the furious trade rumors circulating around baseball that involve his name. 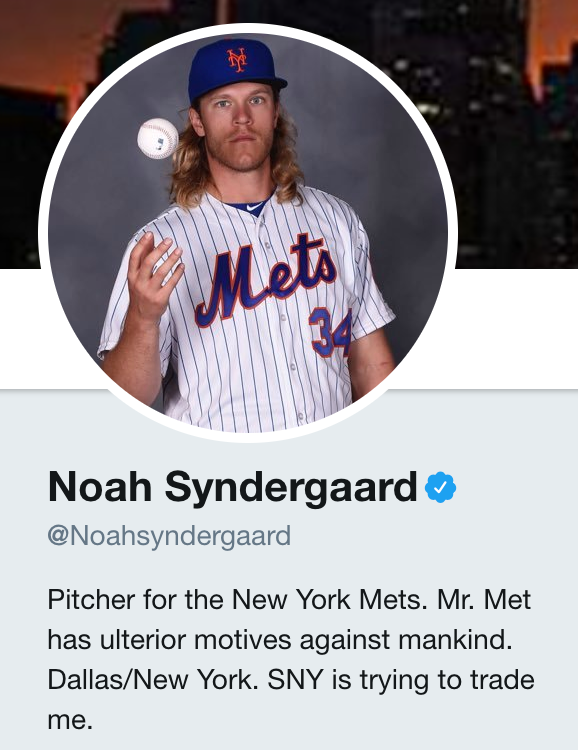 “Pitcher for the New York Mets. Mr. Met has ulterior motives against mankind. Dallas/New York. SNY is trying to trade me.”

Syndergaard has picked up steam as of late in his defense to squash the rumors. For example, he wasn’t too thrilled after watching MLB Network a few days ago.

It’s believed to be boiled down to SNY’s Andy Martino, the man whose reports on this topic have surpassed all.

Martino suggested a three-team deal involving Syndergaard, the New York Yankees, and Miami Marlins was in the works. That was, until, it didn’t happen.

Source: Noah Syndergaard to Yankees is a real possibility but there are “10 other scenarios” Mets are considering

This is just one such example coming from Martino’s mouth.

Interestingly enough, Thor approved an SNY Tweet late in November, prior to the crazed Winter Meetings.

That seems like a dead issue now. Only Zack Wheeler, Steve Gelbs and Anthony DiComo of MLB.com will be receiving that Thor love come Port St. Lucie time.

Someone is getting a big hug in Spring Training…..sorry, not you Dicomo. https://t.co/jVKU6r9ApR

Someone is getting a big hug in Spring Training…..sorry, not you Dicomo. https://t.co/jVKU6r9ApR

While a hug from Thor may snap a few ribs, it could be argued a better option than the list SNY is currently residing on.

As of now, Noah Syndergaard remains the B-ace of the New York Mets. Should something actually happen, SNY may want to pack up and head to the Cactus League in a couple of months.

That is, unless, Thor is there too. Canada may be the next place for SNY to look for shelter.