During the dog days of August, Kevin Durant offers every New York Knicks fan a sliver of hope with praise for Trey Burke.

Ladies and gentlemen, this week’s gross overreaction to social media is brought to you by … me.

New York Knicks’ fans across the world immediately saw dreams of Kevin Durant in orange and blue when he took to Instagram to comment on Trey Burke’s game.

@TreyBurke is special. He’s gonna have a big season next year ? He has a lot of Isaiah Thomas in his game. #Nasty

Durant was watching Burke’s highlights from a 2018 game in March against the Hornets. Knicks fans will remember that Burke absolutely went off. The Michigan man poured in 42 points and added 12 assists. Unfortunately, the Knicks lost in O.T. but the re-birth of Burke’s NBA career was in full swing.

This prompted Durant, who may have just been taking a break from battling internet trolls, to send a compliment Burke’s way. 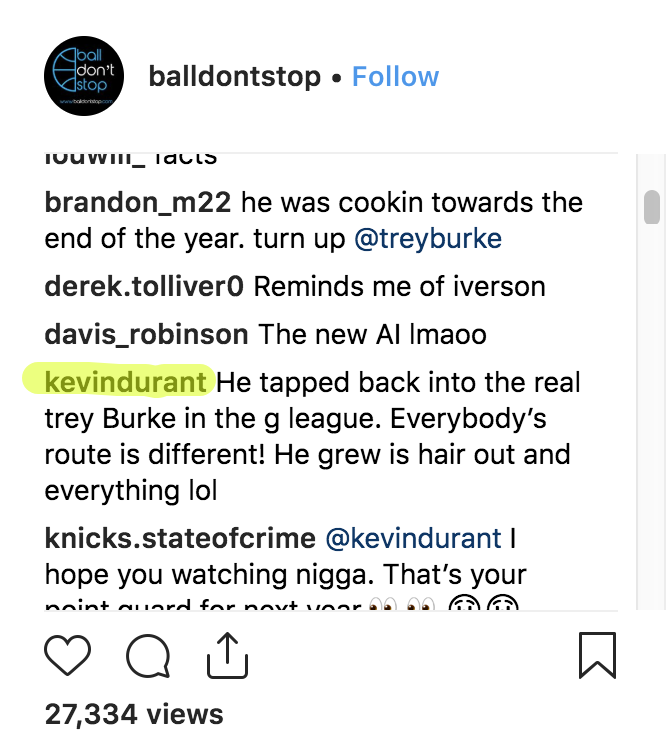 KD certainly has a point. Burke, who was drafted by the Minnesota Timberwolves and traded to the Utah Jazz on draft night, and also spent time with the Washington Wizards certainly knows how hard it is to stay in the NBA.

Burke’s journey also included a stint in the G-league with the Westchester Knicks, where the 25-year old point guard finally found his way.

Durant is only saying what is painfully obvious at this point. Burke has worked his tail off, and at times last season, he was one of the Knicks’ most potent scorers.

Yet, that won’t stop fans from assuming that KD will bolt from his tailor-made dynasty in Golden State to take on a championship-starved Knicks franchise and the bright lights of New York City.

A line-up for Durant, Kristaps Porzingis, Kevin Knox, and Frank Ntilikina is a gift great enough to make any fan trade away Christmas and their birthdays for the next 10 years.

And while it’s most likely just hot air, Zach Lowe of ESPN believes that the Knicks feel confident in their chances to seduce to the two-time NBA champion.

Folks, its August, and stories like this happen frequently but rarely have any legs. But if you’re an eternal optimist like me, the Knicks have been putting pieces in place to make a big move in free-agency during the summer of 2019.

People around the league are slowing buying into the Knicks as a franchise with a promising future. Let’s just hope Durant is as well!