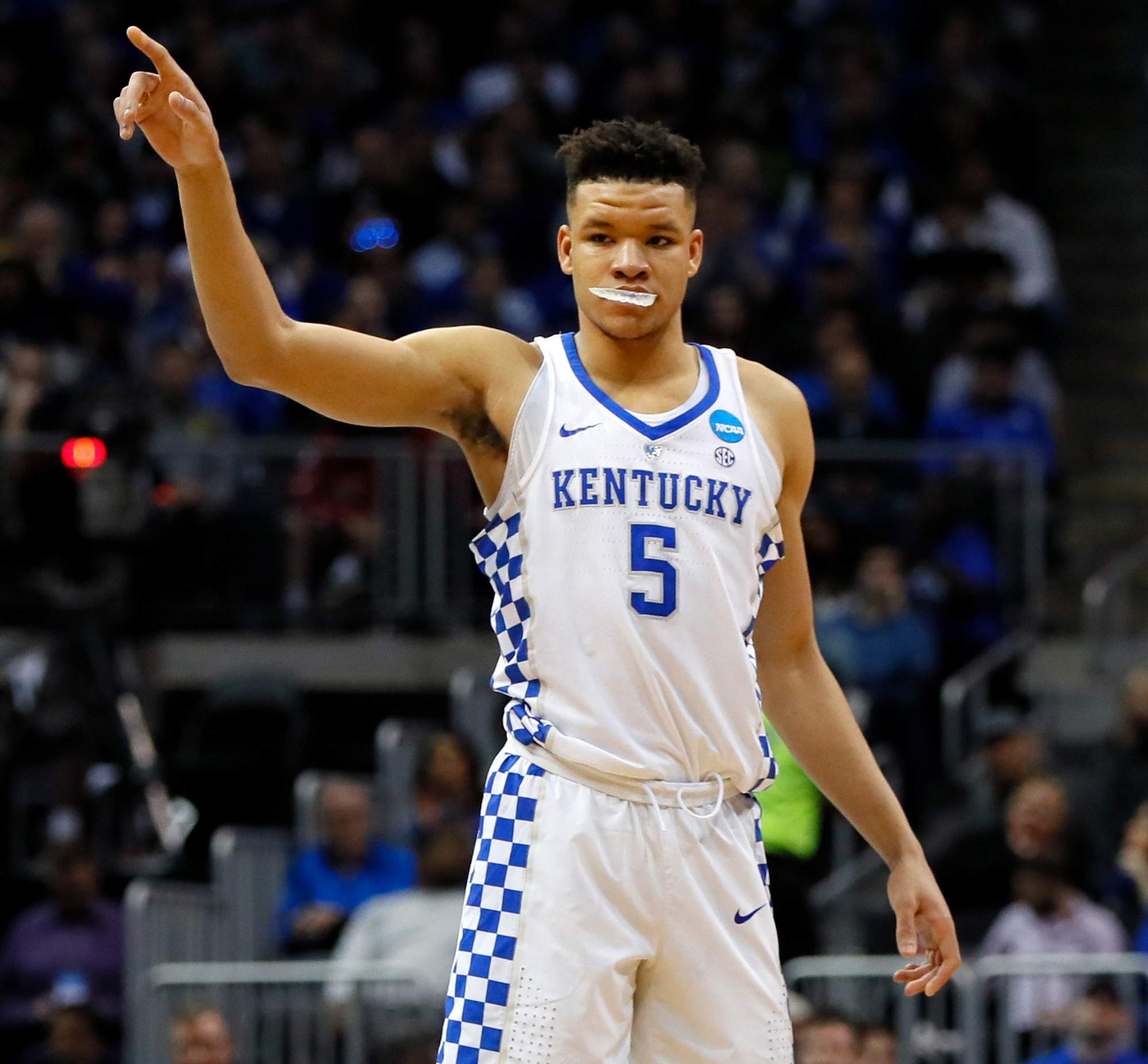 In an era where two-way wings reign supreme, 18-year-old Kevin Knox has the potential to be a perfect fit for New York Knicks basketball and its lengthy timeline.

With the number nine pick in the draft, the Knicks need to grab hold of Kevin Knox.

The Kentucky forward has been increasingly touted as a high upside player. Looking at his combination of youth, athleticism, length, and scoring ability, it’s hard to see him not ending up a lottery pick. Possibly just as important, it’s hard to see him being a bust with his level of talent.

Knox played in a college system at Kentucky that saw multiple players getting a high percentage of touches. Him, Shai Gilgeous-Alexander, Hamidou Diallo, and PJ Washington all had a usage percentage over 20 percent through 37 games. The first three of these players all are likely to be drafted in the first round.

However, Knox is the standout talent of the team. He finished his freshman season at Kentucky boasting a line of 15.6 ppg, 5.4 RPG, and 1.4 APG on a mediocre 44.5 field goal percentage. As a potential ninth pick, New York can hit a home run by drafting the athletic combo forward. Knox has a ton of strengths on offense, but some things need to be worked on before he plays impact minutes in NY.

Knox’s biggest strength is his ability to score and attack the paint. He has a strong skill set of attacking the basket off the dribble, offcuts, and in transition. He also has a very fluid touch around the rim in order to finish high difficulty plays. This type of talent is something New York is lacking. Tim Hardaway Jr. isn’t particularly aggressive, and Frank Ntilikina doesn’t yet have the confidence or ability to score at the rim. Knox can be that player to aid an offense that has little to work with.

Knox has the body of a modern NBA combo forward. At 6-foot-9 with a 7-foot wingspan, his potential is heightened greatly. Given his love of taking mid-range jumpers and penetrating a defense, his length and size will help him score at the next level. This also allows him to hypothetically transform into the modern switch-all defender that the league is so enamored with. Knox’s frame is a monstrous need on this Knicks team. They have no comparable player and he can slide between the small forward and power forward depending on the situation.

Knox is a great leaper as well. While he doesn’t often put defenders on posters, he is able to run the break and finish with a powerful jam. His leaping ability is such that defenders aren’t in the position to contest his attack and he can simply soar and score. This type of athleticism gives the offense a little extra wiggle room for success. If plays break down, you may be able to count on him to make something out of nothing and finish above the defense.

Knox has the making of a futuristic player on the offensive end. A lot of his success down the line will have to do with his three-point accuracy. For his sole season at Kentucky, he shot 34.1 percent on 4.5 attempts per game. This isn’t strong, but the seeds are there. And they will likely grow. His shot is fluid and pleasing to the eyes, and he possesses the heat-check factor that all teams need down the stretch.

Narrowing down his shot selection a bit should help his numbers improve, as well as playing off the ball and spotting up from three. Years down the line, Knox should be a very capable shooter taking between five and eight three-pointers per game. Whether he plays as a small forward or power forward, this skill is necessary, and one he can capitalize on.

Perhaps the most intriguing aspect of Kevin Knox’s profile is his youth. Knox is 18 for two more months. He is already so talented, and comparable prospects like Mikal Bridges and Miles Bridges are already in their 20s. He isn’t a project as a draftee, and he has several years of development ahead of him. This should play a really big role in the Knicks’ draft process since they could have a star player in the making on their team for close to a decade if things play out right.

Lastly, Knox works really hard in transition. He is adept at noticing his team has pulled down a defensive rebound and then sprinting down the floor for a pass like a wide receiver. He has awesome speed and length to match his leaping ability and finishing skill. This combination of talent makes him a great transition attacker that leads to easy baskets and an automatic boost to the Knicks underwhelming offense.

Knox is far from a perfect prospect. Funny enough, his strength is one of his weaknesses. This will be a key part of his development. If he is to become the switch defender he can be, he needs to beef up so that he can reliably deal with power forwards his height. For now, he would be pummeled by the average power forward or small forward in the NBA. Given the modern NBA where defensive versatility is at a premium, lots of Knox’s future on defense is only hypothetical at the moment and based on solid improvement. But if the strength and defense come, All-Star potential is sitting at the nine spot in this year’s draft.

Going along with this, his effort falls off occasionally on the defensive end. His intelligence reading plays is low and he does not get many steals or blocks. Someone with his body and athleticism should have been able to compete harder for those defensive possessions. Knox may not develop into a great help defender, but his on-ball defense should be solid if he stays engaged. His first couple years could be rough on this end, especially if he is attacked by a seek-and-destroy type of offense like the Cleveland Cavaliers or Houston Rockets.

For all of Knox’s athletic progress, one aspect that is lacking is exceptional lateral quickness. On both sides of the ball, this is important. This is talent players like Kevin Durant, Bradley Beal, Jayson Tatum and Paul George use very well in order to create space and score. To find a higher level of offensive potential, he could gain a lot by working on this.

Knox should be an instant fit on the Knicks roster. They have no young forwards to move towards the future with and Knox could hypothetically play the small or power forward. On the defensive end in several years, he could very well be their go-to switch defender as well. The Knicks desperately need shooting, scoring, and athleticism on the team. Knox can check each of those boxes.

Kevin Knox, Frank Ntilikina, Kristaps Porzingis and Tim Hardaway Jr. make up a solid young core with two-way potential. Do they win a championship with this exact core? No. But the future is bright in NY with large contracts coming off the books over the next couple years. Knox has the highest ceiling of anyone on the roster outside of KP.

Don’t overthink the draft. Take Kevin Knox if he is on the board.

NEXT: The Trade That Can Catapult The Knicks Rebuild