New York Knicks general manager Scott Perry will represent the team at next week’s draft lottery, but the team is missing a huge opportunity.

The NBA Draft Lottery is taking place on Tuesday, May 15th and Scott Perry will be in attendance to hear the New York Knicks’ lottery result. Teams can really send anyone they want and the person representing the team really doesn’t do anything. They just sit there and wait to find out where they will be drafting. The lottery can be a bit anticlimactic for sure.

Perry is one of the newer faces in the organization and while there’s nothing wrong with him, the Knicks could have sent a much better representative in his place. Here’s your definitive list of the five people the Knicks should be sending to Chicago in place of Scott Perry.

Not that the man needs any more press coverage right now, but he is going to be one of the faces of the organization going forward. Maybe this is a new era in Knicks basketball where things actually begin to break right for the organization. Maybe Fizdale can be the good luck charm the Knicks have always needed.

Of course, this would probably result in a waste of time for the new head coach who is focusing on building relationships with his players and figuring out the direction to take the team. But there is certainly a level of excitement throughout the fanbase and Fizdale is a huge reason for that enthusiasm. Give the people more of what they want.

This is definitely not the smartest idea. In fact, this is probably a very dumb idea. Kristaps Porzingis should be fully focused on his rehab from injury and he should not have to worry about the team’s lottery fortunes.

But is it so wrong for the fans to want to see the franchise cornerstone? The outlook for next season already looks bleak with Porzingis guaranteed to miss a large chunk of the season—and possibly the entire season. Seeing KP will serve as a good reminder that there is still hope on the horizon after something crazy happens like Philadelphia jumping up to the first overall pick.

You might be scratching your head on this one, but hear me out. Jim Dolan might be the most hated owner in professional sports. The past few years he has taken a significant step back and tried to stay out of the spotlight, but now is the perfect time to try and rehabilitate his image with the fanbase. What does he have to lose?

If the Knicks maintain their position at the ninth pick—or worse, drop a spot or two—no one will blame Dolan for this because as we know, the representative literally just sits in a chair.

But if the Knicks somehow, someway jump into the top three picks of the draft, Dolan’s face will be the image Knicks fans will see when they hear this incredible news. Of course, Knicks fans will still hate Dolan, but that’s the kind of subliminal messaging that can help slowly repair the despised owner’s image. It’s science. 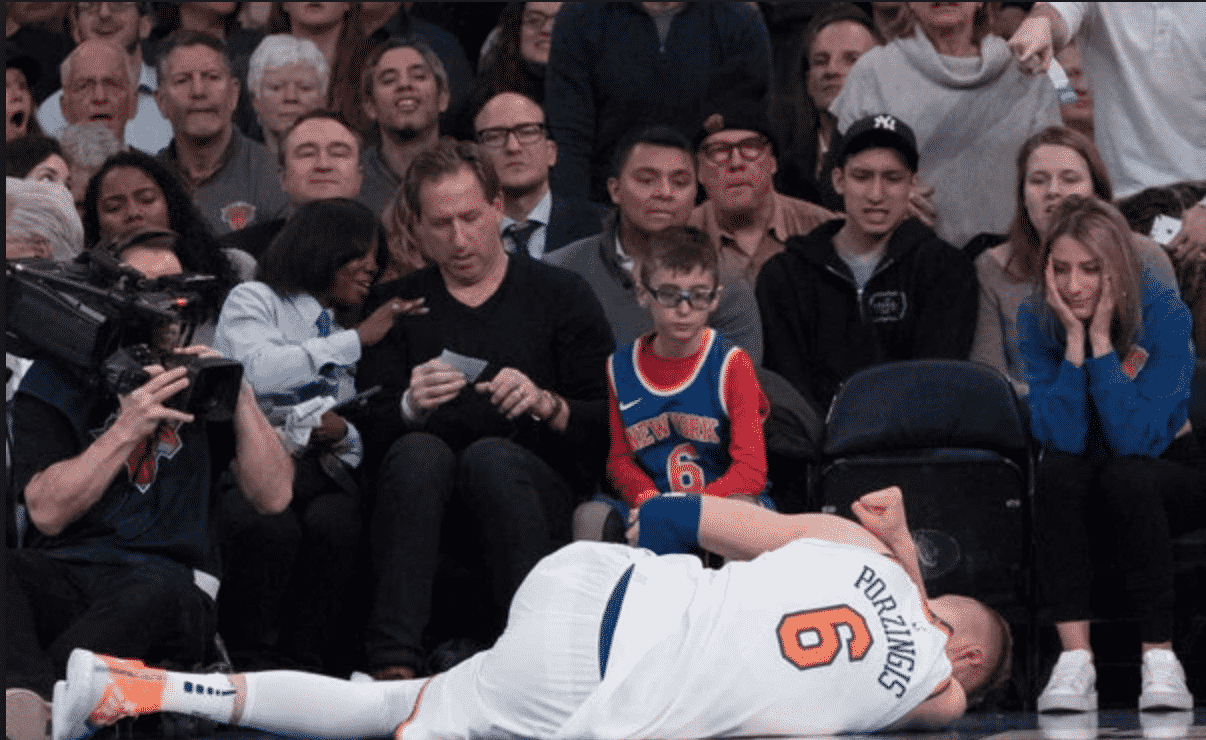 This would be the perfect way to reverse the mojo. This kid was front and center for the worst Knicks moment in recent memory. The universe has a way of balancing itself out. It would only make sense for the basketball gods to grace the Knicks with a top three pick. He watched the Knicks lose their franchise player, but now he gets to watch New York get gifted another.

The only stipulation is that he has to wear the same exact outfit. That look was “little kid going to the game” chic in a way that gets hard to pull off as you get older. Constantly wearing a jersey everywhere you go starts to feel weird at a certain point. Enjoy it while you can young one.

Adam Silver: Hey David, do you have any idea why I just found this envelope in the freezer in the breakroom fridge?

David Stern: *laughing menacingly* I have no idea what you’re talking about…

Silver: You know we use ping pong balls now, right?

Stern: *returns to his seat as a representative of the Knicks*

Silver: …And that means the first pick in the 2018 NBA Draft will go to the New York Knicks!

Stern: I did this. I fixed the Knicks…

NEXT: LeBron And The Knicks Is Too Good To Be True