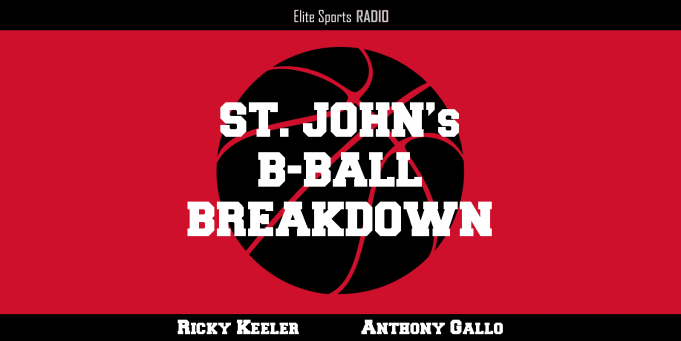 On this episode of St. John’s B-Ball Breakdown, we recap St. John’s performance in the non-conference and look ahead to the start of Big East play.

On Thursday night, the St. John’s Red Storm will get the Big East season started when they host Providence at Carnesecca Arena. Before conference play gets started, Anthony Gallo and I bring you another episode of St. John’s B-Ball Breakdown here on Elite Sports Radio.

Our first topic of conversation was about the last two games St. John’s played in the non-conference against Iona and St. Joseph’s. We discussed the Red Storm beating Iona despite not making a single three-pointer and the 28 points that Shamorie Ponds put up against St. Joseph’s at the Mohegan Sun Arena in Connecticut.

After those two wins, St. John’s is now 10-2. We debate where the team stands after non-conference play. Plus, even though it is December, it is never too late to look at NCAA Tournament projections. The two of us look at the projections from ESPN’s Joe Lunardi and CBS Sports’ Jerry Palm, who both rank St. John’s differently.

This week, the Red Storm will host the Friars and then go to the Prudential Center on New Year’s Eve to play #23 Seton Hall. We previewed both of those games and discussed whether or not St. John’s had to start off the Big East schedule no worst than a 2-1 record after three games. This includes their matchup at #25 Creighton on January 3.

While we are a St. John’s themed show, we gave a quick preview to the Big East. Our topics including how great #1 Villanova has been out of the league and who might be the surprise teams out of the Big East. Four teams are ranked in the Top 25, but Butler and Marquette have a chance to make things interesting in the conference.

Finally, the two of us talked about Oklahoma freshman guard Trae Young, who continues to be the talk of the entire college basketball world. We recorded this episode before Young had 25 points and ten assists in the first half last Friday against Northwestern.

On behalf of Anthony and I, we want to wish all of our listeners a Happy New Year and our next episode will be recorded in 2018!