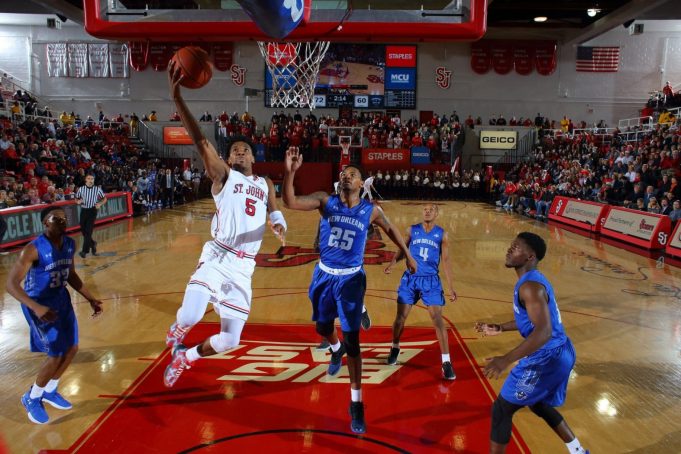 Despite trailing by ten in the second half, St. John’s rallied for a 82-77 win against Oregon State in the AdvoCare Invitational to remain undefeated.

Forget the Syracuse Orange. Fans of the Orange faithful might have found another, more reliable, college team to cheer for.

In the quarterfinals of the AdvoCare Invitaitonal, St. John’s found themselves trailing by ten points with 10:31 left against Oregon State. After that point, the Red Storm were able to rally and went on a 33-18 run to close out a 82-77 win to improve their record to 5-0 on the season.

The star of this afternoon’s Thanksgiving game was Shamorie Ponds. The St. John’s point guard was only 5-for-17 shooting for the day, but still managed to put up 26 points, six assists, and a pair of steals. The key for him was his clutch free throw shooting, as he was 15-for-15 from the charity stripe.

It was a close game in the first half as Oregon State had a 40-37 advantage. The key for the Beavers was their perimeter shooting. They came into the day shooting 24 percent from downtown, but they made ten threes in the game, including four apiece from Ethan Thompson (19 points) and Steven Thompson Jr. (22 points).

While Oregon State shot 44 percent for the game, it was St. John’s defense that helped them get back in the contest. In total, they forced 21 turnovers from the Beavers and they allowed just ten made field goals in the second half on 27 attempts.

To add on to the good team defense, St. John’s had 14 steals and six of them came from Justin Simon. Simon only had six points in the game, but the guard was tied for the team-high in rebounds (six with Tariq Owens) and had three assists.

In order to win close games, a team has to make their free throws when it counts. St. John’s did just that this afternoon as they were 26-of-30 as a team from the foul line. While Ponds did have 15 of those attempts, it showed they were able to get to the basket when the shots weren’t falling (38 percent as a team for the game).

While Marcus LoVett also had 18 points today, the frontcourt deserves a lot of credit. Kassoum Yakwe and Owens combined for 14 points and 11 rebounds off the bench, which was important because Bashir Ahmed had two fouls in the first 12 minutes of the game.

Next Game: St. John’s will take on the Missouri Tigers (4-1) out of the SEC tomorrow morning in the AdvoCare Invitational semifinals (11 a.m ET, ESPNNews). Missouri got to the semifinals after beating Long Beach State earlier today, 95-58.