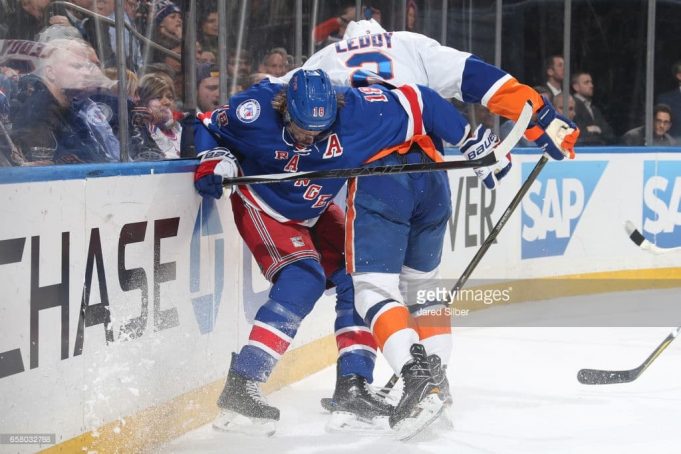 For the total sports nut, dreams of being able to watch all four major sports live on the same day do come true. For today is that day.

Thursday, Oct. 19, is the first day in 2017 that all four major pro sports are in action. You’ve got Game 5 of the NLCS between the Chicago Cubs and Los Angeles Dodgers. There’s the Kansas City Chiefs and Oakland Raiders doing battle on Thursday Night Football. And there are multiple NBA and NHL games to take in.

This is the only day in 2017 when this is guaranteed to happen. What else could you possibly want? For New York sports fans, there are two must-watch, can’t-miss games to take in.

For fans of the New York Knicks, they get to watch exiled superstar Carmelo Anthony take on his former team in the season opener. After spending the better part of seven seasons with the Knicks, most fans forget how successful Anthony has been against them.

RELATED: What To Expect In Knicks vs. Thunder

For the New York hockey fan, it doesn’t get any better than the New York Islanders and New York Rangers continuing their rivalry. Both teams have struggled so far this season.

The Rangers have started 1-5-1 for the first time since the 1959-60 season. The New York Islanders are 2-3-1 but have yet to score a power-play goal. The Islanders are 0-for-20 on the power play while allowing three short-handed goals. The Rangers could be coming at the perfect time for the Islanders as they rank 30th (74.1 percent) on the penalty kill.

The Islanders have won 10 of the last 13 meetings in this matchup, including a 5-1 record at MSG. Going back to the strike-shortened season of 2012-13, the Islanders are 8-2 at the Garden.

NEXT: Rangers Meet Islanders In Battle For Basement