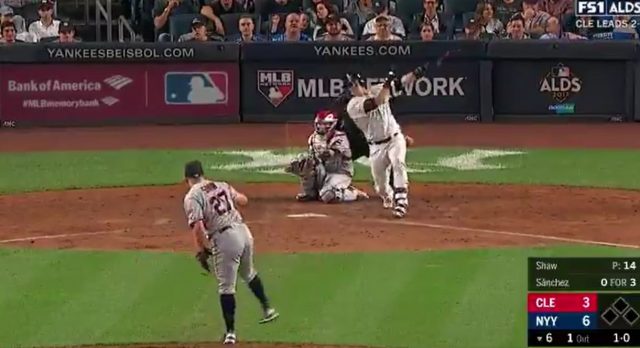 Logan Morrison is sitting on his couch watching the New York Yankees and Gary Sanchez continue to slug in the playoffs.

It doesn’t matter what the score is, it will never be enough to stave off the Cleveland Indians. The New York Yankees learned that the hard way on Friday night.

But tonight, the Yankees continue to increase their lead and they were helped in a huge way by Gary Sanchez.

No, it wasn’t his usual 400-something foot shot. But this one was muscled out to right field and DEEP! Deep enough that Andrew Benintendi can’t complain about the Yankees overutilizing the short porch.

You can bet even Logan Morrison is sitting around, watching the playoffs from his couch and thinking, “man, I had more home runs than that guy.”

But how many playoff games have you played in, Logan? Seriously, I have no idea.

Sanchez went Oppo Taco on a Monday but that’s beside the point. The point is that he gave the Yankees an extra insurance run, one they so desperately needed to take the 7-3 lead going into the seventh.

Not only can he hit home runs, but now he can block baseballs with the best of them. Who knew the playoffs would turn the Kraken into such a monster?

We told you you shouldn’t sleep on this guy. Now it’s paying off.

Miguel Andujar could get Yankees shot with Matt Carpenter injured