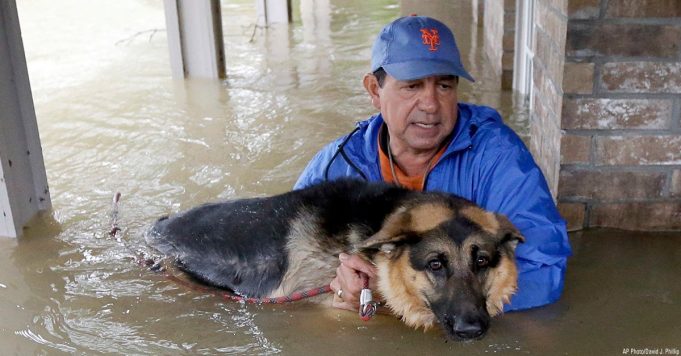 At least one good thing came out of the New York Mets’ lackluster 2017 season…a good Samaritan in Houston.

The New York Mets are collectively batting .248 on the season. This one Mets fan is currently batting 1.000 for mankind.

As reported on The Voice of America, Joe Garcia refused to leave home without his dog. In rescuing his pup, he got attention while sporting a New York Mets cap.

Texans Refuse to Leave Pets Behind as They Flee Harvey https://t.co/tcG3lE9gpE pic.twitter.com/9riKzKB0kT

During heavy rainfalls and severe storms, several pets are often left stranded. Thanks to the dedication of this Mets fan, his dog, Heidi, will live to see another disappointing season.

With all the tragedy going on in Houston, this is another shining example of just how important animals are to mankind. To go back in the water to save his own pup instead of saving himself shows that Mr. Mets fan is willing to sacrifice it all for his dog.

Cue the ugly tears. This is dedication that the New York Mets can learn from.

Hey, Mets. Get this man some tickets, please. Once the crisis in Houston settles down, bring this guy up to Citi Field and show him some recognition.

Finally, someone in a Mets uniform does something heroic this season. In fact, this might be the best thing someone in a New York Mets hat has done all year long.

The act of heroism is great but I’m more impressed that he’s willing to be seen in public in a Mets hat right now.

NEXT: New York Mets: It's Time For David Wright To Hang Up His Cleats