Some key players from the New York Knicks’ past were missed in the upcoming installment of NBA 2K.

For years, fans have used the custom rosters feature in NBA 2K games to create their favorite team’s all-time roster. This year, however, the folks from 2K Sports announced that all-time team rosters would no longer have to be created by fans.

The latest installment of the NBA 2K series includes every team’s all-time roster with the purchase of NBA 2K18. Yesterday, each team’s roster was released — including the New York Knicks.

While the Knicks’ all-time roster is, for the most part, well-made, there are some snubs that catch the eyes of loyal Knickerbocker fans. Without further ado, these are some of the players missing from the all-time Knicks team.

Today’s generation of Knicks fans might not even know Richie Guerin existed, let alone played for the Knicks. The truth of the matter is Guerin is one of the greatest Knicks to ever step on to the hardwood.

A Bronx native, Guerin played in six-straight NBA All-Star games in seven full seasons in New York. Guerin led New York in scoring three times and also led the team in assists from 1957-1963. The Knicks traded him to the St. Louis Hawks just two games into the 1963-1964 season but Guerin had already made his mark on the franchise by then.

Guerin averaged 20.1 PPG, 3.7 APG and 2.2 RPG as a Knick. He ranks sixth and fifth in points and assists, respectively, in franchise history. Guerin was inducted into the Naismith Memorial Basketball Hall of Fame in 2013. 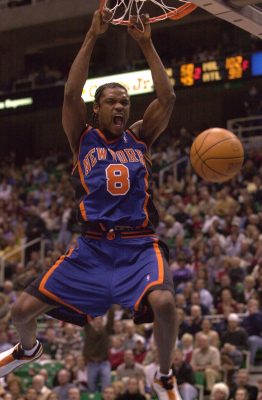 While 2K will be including the 1998-99 New York Knicks as a separate team in NBA 2K18, it is simply baffling that Latrell Sprewell will not be on New York’s all-time roster.

Sprewell led the Knicks in scoring during their shocking run to the 1999 NBA Finals, averaging 20.4 PPG while shooting 42 percent from the field.

He also helped lead the team to back-to-back Eastern Conference Finals appearances, losing to the Indiana Pacers in six games in 2000.

Dick McGuire is one of two Knicks whose numbers are retired by the team but are not on 2K’s newest roster. McGuire was a seven-time All-Star in New York and led the NBA in assists in 1950.

What kept McGuire off the roster are his low averages, with a Knick career average of 7.1 PPG, 5.6 APG and 4.2 RPG. Unfortunately for the Hall of Famer, the Knicks’ rich history of guard play made it difficult for him to find a spot in NBA 2K18.

Tyson Chandler’s departure from New York was certainly not amicable. Many fans felt his performance against the Pacers in the 2013 NBA Playoffs and beyond was nothing less than a disaster. But Chandler remains one of the Knicks’ best free-agent signings ever.

As soon as Chandler joined the Knicks, the team’s defensive woes disappeared. Chandler’s addition before the 2011-12 season catapulted the Knicks to the fifth-best defensive rating in the NBA, up from 10th worst the season before.

His stellar rim protection earned him the 2012 NBA Defensive Player of the Year award, something neither Patrick Ewing nor Marcus Camby was able to do during their time in New York. As a matter of fact, Chandler remains the only Knick to ever win Defensive Player of the Year honors. Chandler was also a key contributor in New York’s 54-win 2012-2013 season, landing his only NBA All-Star selection.

The other Knicks legend whose jersey hangs from the rafters at Madison Square Garden but was left off the roster is Bill Bradley. He was a part of the only two championship teams in franchise history. But Bradley wasn’t just along for the ride, as his All-Star play in 1973 was essential to the Knicks outlasting the Los Angeles Lakers in the NBA Finals. Bradley finished his Knicks career third in games played, 10th in points and sixth in assists.

There have been better players to play for the Knicks than David Lee. But homegrown talent simply resonates with fans. Lee was not expected to be more than a role player for the Knicks, who selected him with the 30th overall pick in the 2005 NBA Draft.

However, Lee shattered all expectations and recorded the second-most rebounds among rookies that season, picking up All-Rookie Third Team honors along the way. Lee also finished third in VORP, fourth in BPM and third in win shares among all rookies.

He would go on to play the best basketball of his Knicks career in the 2009-2010 season, where he averaged 20.2 PPG and 11.7 RPG en route to an All-Star selection. Lee remains the last Knicks player since Patrick Ewing in 1997 to be drafted by the team and make an All-Star game while still playing in New York.

NEXT: Knicks Preparing for Melo in Camp as Rockets Talks Go ‘Dormant’ (Report)