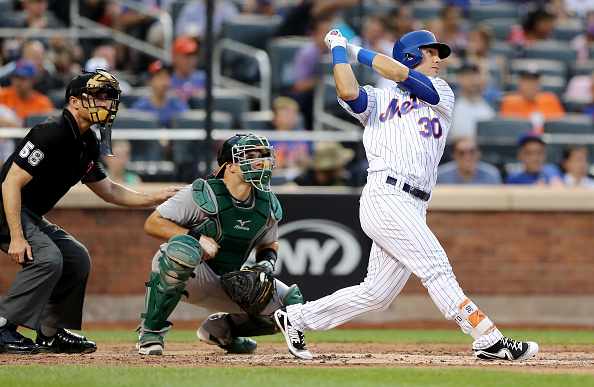 While the Mets have been a major disappointment in 2017, young buck Michael Conforto has been the one guiding light.

The New York Mets haven’t been very good this season. There’s no skirting around that fact.

They are currently sitting with a 48-55 record (third in the NL East) and are 14 games behind the first-place Washington Nationals as of Monday afternoon. They’re in a position they didn’t expect to be in at the start of the 2017 baseball campaign.

They’ve suffered an onslaught of injuries to many of their top players, including seven-time All-Star and fan favorite David Wright, who has played in only 75 games since the start of the 2015 season due to neck, back and shoulder problems. All-Star outfielder Yoenis Cespedes has been in and out of the lineup for the most part of the season.

The Mets’ young promising pitching staff of Matt Harvey, Noah Syndergaard, Jacob deGrom, Steven Matz and Zach Wheeler have pretty much made it their mission to be on the DL throughout the season.

Those guys can’t stay healthy for anything.

Basically, the Mets have completely underachieved this season. The spotlight that the franchise snatched from their city rivals last season has completely evaporated.

However, Mets fans should take that frustration and concentrate more on one of the top young players in the big leagues in 24-year-old Michael Conforto.

The Mets left fielder has looked impressive this season and has been the one consistent presence in the lineup and field for the sub-.500 Mets.

Conforto is currently leading the team in batting average (.289) and on-base percentage (.395). He’s already cranked 21 homers this season (a career-high), driven in 55 runs and crushed 19 doubles. With his pop and quickness in the field, it’s easy to believe that he will eventually knock 40 homers in a season and snag a couple of Gold Gloves before he’s done playing the game.

He’s been on fire since appearing in his first All-Star Game, hitting .304 with seven home runs, 13 RBI and a 1.084 OPS. That production has helped the Mets inch closer to reaching the .500 mark, while also keeping them relevant in the New York headlines.

Conforto came onto the scene strong as a rookie during baseball’s biggest stage in the 2015 World Series against the eventual champion, Kansas City Royals. The 10th overall pick in the 2014 MLB draft batted .333, slugged .733, knocked in four runs, hit two homers (both in Game 4) and collected 11 total bases in 16 plate appearances in the five-game series loss.

Conforto’s versatility certainly stands out when the Mets think towards the future, as he’s capable of playing all three outfield positions. The 24-year-old is expected to be a bigger threat on the bases moving forward and with Matt Harvey’s inability to stay on the field, Conforto has a chance to become a star in New York in the same fashion of the Dark Knight.

By the end of the season, I expect him to have a larger following amongst baseball fans. His name will come up more often in discussions as to who the best 25-and-under players in the majors are.

It’s all in play for him. The world is his oyster.

With the New York Yankees’ young stars Aaron Judge and Gary Sanchez grabbing all the attention, the Mets have their own star in Conforto to build around for both the present and future.

The Mets have surprisingly regressed this season but the play of Michael Conforto has given Mets fans something to cheer about during this in-limbo season and given them a reason to look forward to the future.