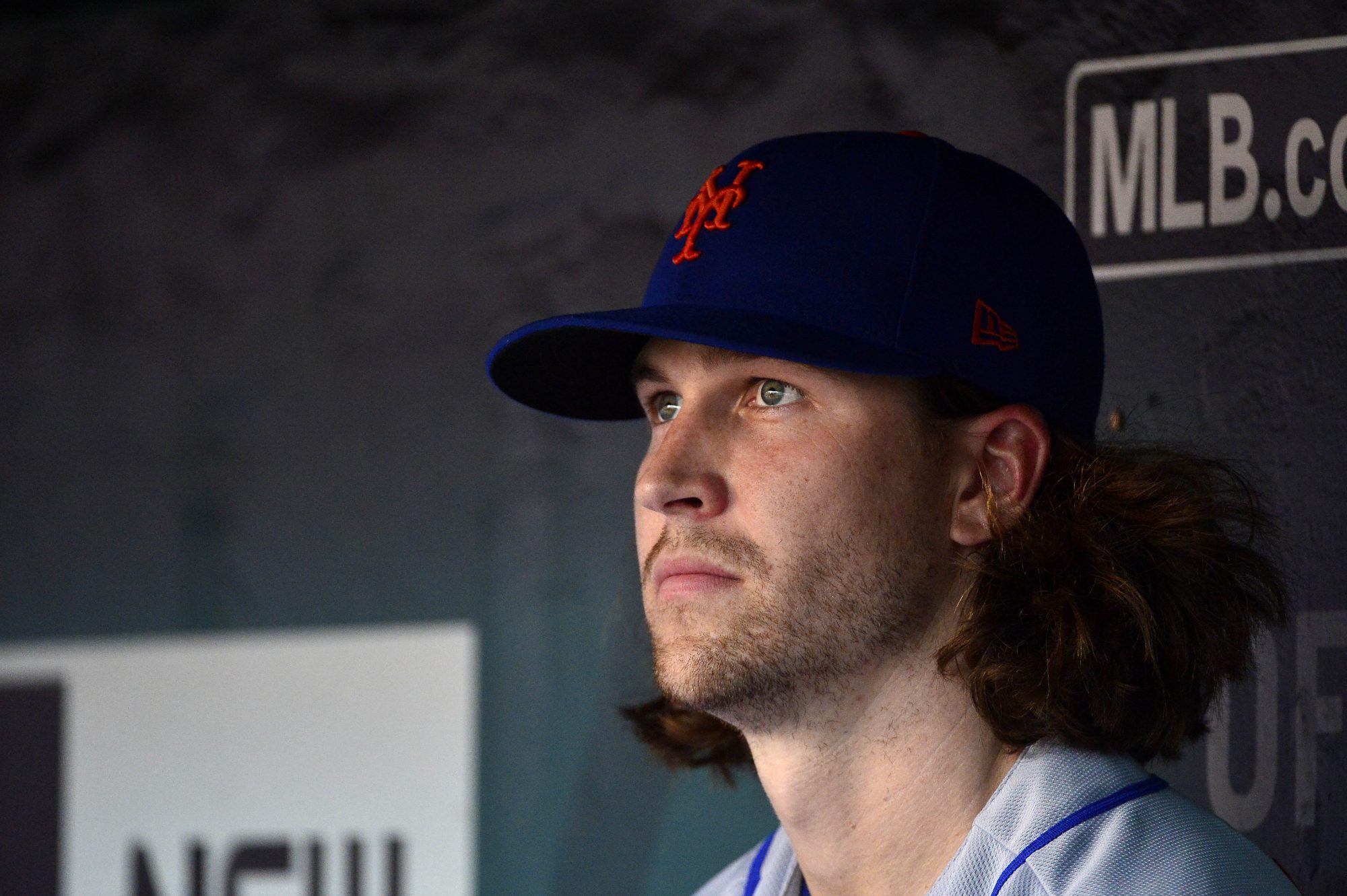 Jacob deGrom has been nothing short of deGrominant in his last eight starts. During that stretch, the right-hander has gone 8-0 with a 1.61 ERA and 0.83 WHIP. He’s struck out 58 batters over 61.2 innings of work.

His eight consecutive wins have him tied with Los Angeles’ Clayton Kershaw for the longest winning streak among active pitchers. With the way he’s pitching, there’s no reason to think he won’t take the lead for himself in his next start.

All of this makes the eight-run debacle of a performance he delivered in Texas on June 6 a distant memory. It’s also dropped his ERA by nearly a run-and-a-half, from 4.75 on June 6 to 3.30 on July 25.

His winning streak and overall performance have marked two of the lone bright spots in a dull season for the Mets. If the league didn’t know how good he was before, it does now.

And now that Kershaw, the best pitcher in the world, finds himself out indefinitely with another back injury, deGrom’s case for the National League Cy Young Award just got stronger.

So here we are, in the midst of an awards race that, just a few days ago, seemed like a top-heavy competition. Now, deGrom finds himself right in the thick of things.

We’ve already talked about how awesome he’s been of late. But that’s only part of the story.

Without an active Kershaw, deGrom now finds himself tied for second on the major league leaderboard for wins. Of his peers with 12 games won, deGrom has the best record at 12-3.

DeGrom is tied for second in majors with 12 wins. It's possible he could get to 20 this year if all breaks right.

He ranks second in the National League in both strikeouts (152) and innings pitched (133.2). While his overall ERA is not on par with his peripheral numbers, it continues to drop at a rapid pace.

By comparison, Los Angeles’ Alex Wood has only made it past seven innings three times in 15 outings, a less-than-impressive 20 percent of the time.

Supporting his work deep into games is his pitch count numbers. He has thrown at least 101 pitches in 14 of his starts thus far and only gets better with length. Batters are hitting just .154 with a .375 OPS when deGrom is over the century mark.

And as deGrom continues to flourish, his competitors have begun to falter. Washington’s Max Scherzer, who is always in the Cy Young Award mix, allowed five runs in only five innings of work in his last start.

While it’s highly unlikely that a reliever would win the award with a number of worthy starters, Dodgers closer Kenley Jansen recently allowed three runs during a blown save against the Braves.

If there’s a chink in deGrom’s armor, it’s the Mets performance this season. His competition—Scherzer, Jansen, and Wood—are all members of division-leading teams.

But maybe that will work in his favor. He’s put up excellent numbers without having a great supporting cast around him. On multiple occasions, deGrom has put the team on his back and carried the Mets to a win.

It’s true that if the season ended today, deGrom would most likely not win the National League Cy Young Award. However, two months of baseball remain. If he can continue to perform at his current pace, there’s no reason why he shouldn’t get the award.

NEXT: Countdown to Amed Rosario's Promotion Has Begun